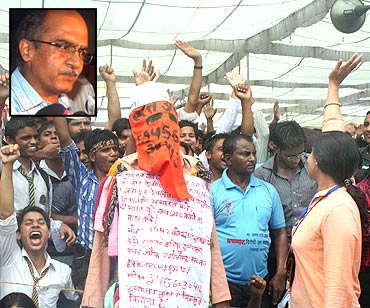 Prashant Bhushan is a lawyer and one of the senior leaders and brains behind the Anna Hazare-led anti-corruption movement for a stronger Lokpal bill. The movement is set to add a historic, new chapter in India's parliamentary democracy.

He spoke exclusively to rediff.com's Sheela Bhatt on the seventh day of Anna Hazare's fast. Bhushan, highly-respected for his conviction in fighting against corruption, for his honesty for the cause and for his obsession to pick up right causes without any fear, shares his passionate thoughts on the movement, on author Arundhati Roy and her opinion and three things in their Jan Lokpal Bill that are not negotiable.

You have never been associated directly with the masses. So far, your career trajectory has been to take up people's issues in the courtroom. This is very unusual for you, no?

Yes, it is very unusual for me in view of my background. You see, sometimes circumstances propel or compel you to be in this kind of situation. That's where I am. One can't shirk one's public duty even if it's not the situation with which you are very comfortable with.

If you feel that it is the movement, which is in the public interest where you can help and make a significant contribution then to shirk from that movement, mainly, because it's a little uncomfortable seems a little unfair. That's why one had to really get involved. 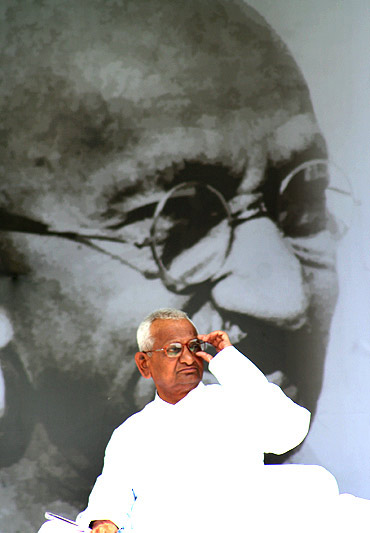 You had been involved in many cases that were taken up by Maoists, Leftists and liberals -- issues that thinker and writer Arundhati Roy also supports. She came out openly in your favour when a CD against you was leaked. You have travelled a long way since last April. On Tuesday she wrote a column in The Hindu against the movement. She has reacted strongly against the idea of the Jan Lokpal bill that you are supporting. How do you take Roy's views?

I can understand where she is coming from. She has an instinctive fear of any movement, which is supported by the big media, by the middle-class and also supported by a section of the corporate world. She is expressing that.

There is this section of Left-liberal intelligentsia which becomes fearful of too much flag-waving or Vande Mataram or Bharat Mata Ki Jai etc. Unfortunately, these slogans and flag-waving has been appropriated, to a large extent, by non-secular saffron organisations. What we are seeing today is the resurgence of patriotism and nationalism in this movement of the kind which we saw during the freedom struggle.

But, the vast majority of people involved in the movement are not the people with saffron leanings or anything. Merely because the movement has some corporate support doesn't mean that it should be viewed with great suspicion or be discredited.

All corporates are not dishonest. Most corporates would like to do honest business. They are also victims of corruption. There are large numbers of corporations who are taking advantage of the climate that has been created.

'Anil Ambani has nothing to do with this movement' 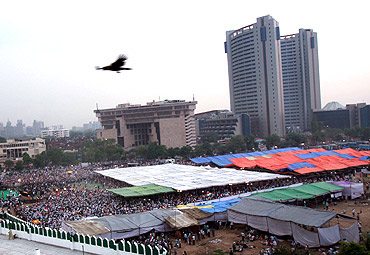 In the last two days some serious allegations have been made. You are the leading lawyer and brain behind the court case in the 2G scam. The allegation is

(Hastily asks the question) Which industrialist involved in the 2G scam is supporting the movement?

Anil Ambani? The charge is that since the 2G scam case is being prosecuted some people want to weaken the government.

'Supreme Court has to be accountable also' 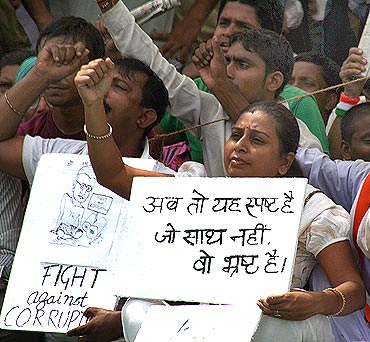 We have listened to all dissenting voices. We had seven to eight meetings with Aruna Roy, Nikhil De and other members of National Campaign for Peoples' Right to Information. We have heard their views. But, we feel that except the part about separating the Grievances Redressal Authority, all their other differences with us are not really valid objections. To think that the Lokpal will become a superpower or Frankenstein monster is not the correct understanding.

Today, the police or the Central Bureau of Investigation can investigate any Indian. The Income Tax department can prosecute anybody and everybody. Therefore, (compared to them) the Lokpal will have limited powers. The Supreme Court, today, has hundred times more power than what the Lokpal will have. Our Supreme Court can squash any law, can issue any direction to the government, can prosecute or jail anybody. But, nobody calls the Supreme Court a Frankenstein monster.

In fact, we have been campaigning from day one that the Supreme Court has to be accountable also. But these people want the Supreme Court to get away without any accountability, which is hundred times more powerful than the Lokpal. In fact, the Lokpal's only power is to investigate people for corruption.

Calling the Lokpal a superpower or that it is a danger to democracy seems to me that people have lost the wood for the trees. Merely because people like Aruna Roy are saying these things, it has become fashionable without understanding what it means.

Aruna Roy has lived her life for the people. When she speaks, people will listen.

She (Aruna Roy) also agrees with that the Lokpal is, precisely, such an authority. Therefore, (continues in firm and loud voice) why should she object or anybody object to the judiciary being made accountable for investigation of corruption by the Lokpal? Specially, (softens voice), we have made additional safeguards of seven members of the Lokpal deciding whether to investigate the judge under question or not.