'We are used to quakes but this time was different' 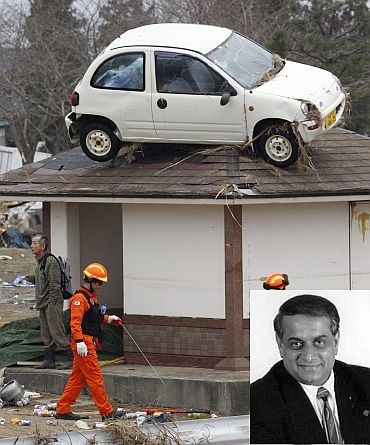 Parmesh Bhatt, businessman and event manager, has lived in Japan for 40 years. Proud of his integration into his adopted country, Bhatt boasts that he can even teach Japanese language to the Japanese.

In a telephone conversation from Tokyo with rediff.com's Sheela Bhatt, Parmesh, brother of filmmaker Mahesh Bhatt, recalls the tsunami, and how this calamity was different from the previous ones in Japan.

"I was in my office working at my desk when the earthquake happened. Having lived in Japan for the last 40 years, once in a while we are used to having earthquakes. But, only on a small scale. We have a quake and then we get on with life.

"But this time something was different. We got a jolt and there was a big noise. Since the building was unstable, everything else was unstable too. I asked one of the staffers to open the main door. The first thing you do when an earthquake occurs is to keep door open. If the building collapses and the door jams, then you have no way of getting out. We used to run to the toilet because it's a safe place to stand in as it is small.

"The Fukushima area had a tsunami some years back when the waves came from the east.

"At that time the tsunami had hit Chile. Japan had built a huge wall to thwart the tsunami danger. There was a barrier against water.

'There was no warning this time' 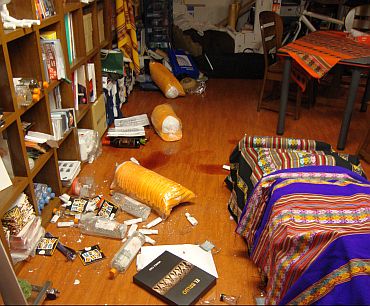 Western newspapers are writing that the government's response was slow. I don't think it's true. The government had to take decisions on the basis of inflow of information. Right now, we are not facing a risk of radiation.

Normally, in Japan, we get earthquake warnings on our cell phones. The seismic P waves are picked up by authorities through seismometers and e-mails are immediately sent, the television starts announcing it and we get alerts on our phones. We normally get the broadcast measurement data, the level and effect of radiation in our e-mails.

In a few seconds, everybody in Japan knows that something is going to happen but this time we didn't get it. Maybe the time was too short. At 2.46 pm on March 11, the earthquake happened without any warning.

When the earthquake struck, a cabinet in my office fell down. I was holding on to my computer, which was also falling down. In a way you get used to earthquakes but to be true, it is always scary. I was frightened. My son was on the job and my wife is looking after her mother so they were at home.

In such a situation, you always check if the communication is working right. I was at my computer so I thought let me see if it is working or not. Our walls were shaking and it was frightening.

My walls were shaking for a full three minutes. I typed out a message to Mahesh because I know he responds very fast. I wrote soon after 2.46 pm, "Extremely huge earthquake in Tokyo right now. I am safe." I knew he will pass it on to family. Everybody in my family got back to me and I told them through e-mail or cell phone that I was safe.

'There was panic buying for the first time' 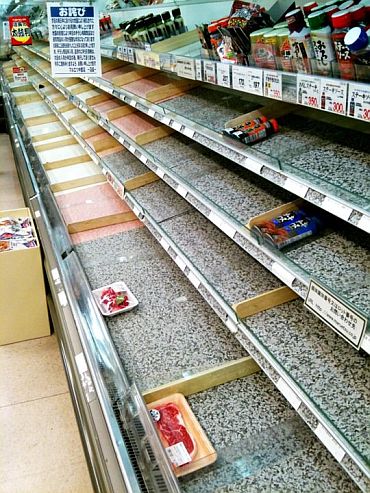 It was very interesting to note what I saw from my window -- in surrounding buildings, everybody was coming out. All of them were wearing fireproof jackets and helmets.

They are all used to earthquakes, so they keep the gear in offices. Then we got news about Fukushima and the devastation over there. Initially the news came that the earthquake wa less than 8.9 in intensity. But we thought it can't be so, it must be more.

Tokyo's quake measured 6.8 on the Richter scale. In Fukushima they got a tsunami warning, so everybody was excited, and everybody was also scared.

The first thing everyone does is to reach out to family. Tragedy brings a family closer. We check if everybody is okay.

The next thing the Japanese do is to show that they are not panicking. They go out and buy supplies like batteries, transistor radios, instant food or water supplies. Gas, water and electricity are lifelines in such times.

Normally, everybody cuts down consumption. Even though Tokyo's earthquake was 6.8, only six people died and 90-plus were injured. This was because of strict standards of building design.

The people are more educated about earthquakes. The only disturbing thing was that people were buying groceries and other supplies in panic. So finally there was a shortage of supplies. Everybody was rushing out to buy and stockpile. I have never seen such scenes in the last 40 years where the store shelves were empty. That was a surprising moment for me. As it had happened in Russia after the collapse of the Soviet Union, it happened here, there was nothing available in the stores.

'Everyone is monitoring the radiation levels' 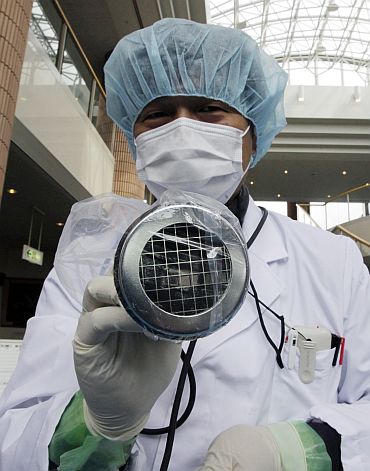 On television they were telling people, "Don't stockpile. Manufacturers have lots of stock and enough supplies."

People shop because they think if trains and subways stop and transportation breaks down, then how will supplies come? Also, people feared that if the energy supply goes then the subways will close. Many people started walking more than before. There were traffic jams on the roads.

There was a kind of chaos but people didn't show panic on their face. I think they showed it in their attitude. They were just buying everything they could. People started buying gasoline, too. It was also out of stock.

In most cities sales of Geiger counters and potassium iodide tablets (which protects against radioactive iodine) increased. The Geiger counter records the radiation levels.

Some people even left Tokyo to escape the aftershocks. They didn't want to suffer blackouts. People would exchange details of the current reading of radiation levels.

We also got mails about the radiation levels regularly which kept us well-informed. We exchanged the broadcast measurement data and the effect of radiation published by the ministries of education, culture, sports, science and technology in Japan. Now we don't have to depend upon true or false media releases.

After calamities, the people are asking the right questions. Since the people are suffering blackouts, they are angry to see that vending machines are still being operated by multinationals.

They are not turned off.  Japan has more than 5.5 million vending machines nationwide. In this automation heaven called Japan, everything is sold through vending machines including toothpastes and toothbrushes.

We are being informed 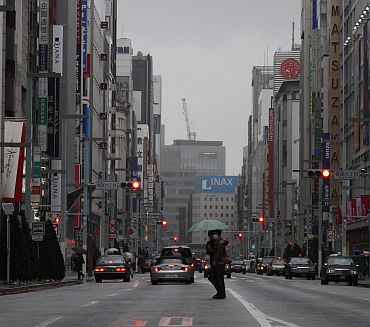 I got a message on the evening of March 19 that said, 'A strong quake with a preliminary magnitude of 6.1 jolted Ibaraki prefecture and its vicinity in the Kanto region (Tokyo was 4.0) and the southern part of the Tohoku region'.

The quake at 6:56 pm registered upper 5 on the Japanese seismic intensity scale of 7 in the northern part of Ibaraki and lower 5 in the southern part of the prefecture, according to the Japan Meteorological Agency. A change in the sea level may occur following the quake, but no damage is expected, the agency said.

So how were we on March 20? I have an email that says, "At 08:45 am Sunday in Tokyo downtown radiation reading is 0.18 microSv/h = normal background radiation. This proves Tokyo is perfectly normal!"

Such e-mails help in understanding what is going on around us.

At present we are having less exposure to radiation than if you take a three-wheeler in Mumbai and get exposed to fumes. We are reading all about what is the government doing at the Fukushima nuclear power plant. We are being informed.

It is business as usual in Tokyo 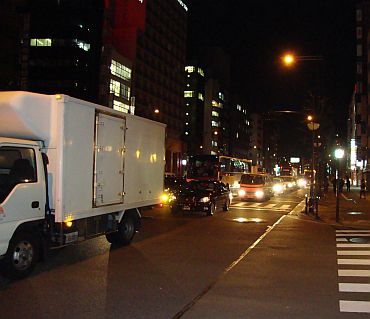 My friends, neighbours and I believe that nobody expected that a tsunami will wipe out the barrier and hit the plant in this manner. It's a natural calamity which hit the back-up power system. People who are educated and reading exactly what happened, are not blaming each other.

All the residents of Tokyo are working. It is business as usual. They have regular schedules and they are attending to it but I saw that Indians in Japan, who are earning in Japan and sending money to their families back home, have started rushing to the airport. They want to leave the country till everything is okay.

I am surprised that 300 Indian I-T engineers were the first to pack their bags and rush to the airport. They are saying that their mothers want them back home. I presume they are educated enough.

Now, I wonder, where is their education?

In Japan, normally people try to listen. They attempt to understand things. I think the Japanese take time in deciding but once they do, they do things fast. Kobe was rebuilt in five years after a major earthquake in 1995.

Tokyo got normal in a week. We will rebuild Japan within five years. Right now, as I said before, people are watching what's happening at the power plant in Fukushima. We are continuously monitoring the radiation levels, we are comparing the radiation in normal times. We are keeping cool. We are not panicking.