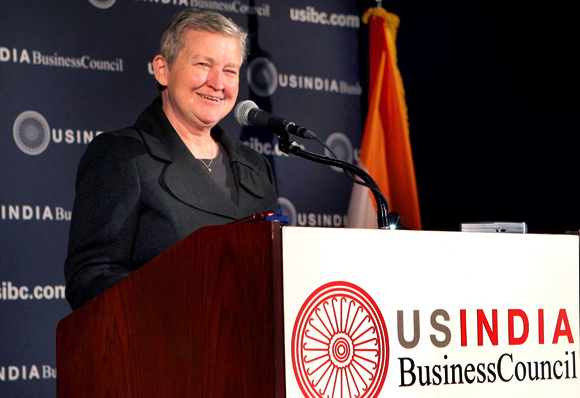 The US's first lady ambassador to India wants to set a new tone for the India-US relationship.

On the eve of her departure to New Delhi as the United States's first woman ambassador to India, Nancy J Powell made it clear that economic and commercial relations would be at the top of her agenda and she would aggressively promote Indian investment in the US.

Powell, a career diplomat, speaking at the reception in her honour hosted by the US-India Business Council, greeted the guests by clasping her palms together and saying Namaste.

She then went on to emphasise the importance of trade and commerce as the anchor of the strategic partnership between America and India.

"Clearly our relationship is founded on democratic values and a shared history that we have in promoting these values," she said, but added, "(our) economic and commercial relationship has been of great importance."

Powell, who has served two stints in India -- first as the consul general in Kolkata and then as a political officer in New Delhi -- recalled, "When I arrived in Kolkata in 1992, we celebrated 300 years of having a consul in Kolkata who was promoting trade." 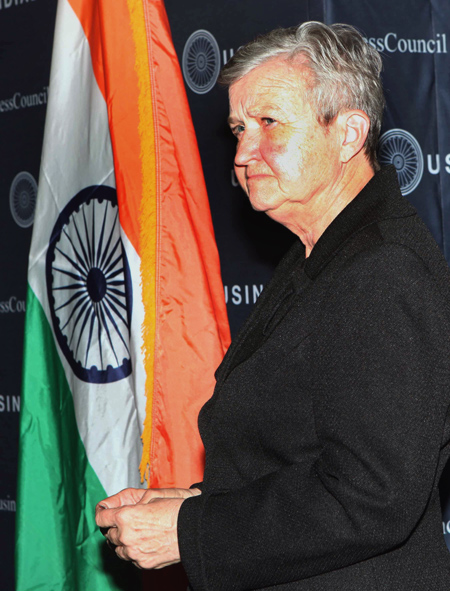 "Since that time, the business relationship has been very important and my own arrival in India in 1992 came on the heels of the impressive reforms that were started in 1991... and certainly at that time we began to see the beginnings of a true commercial relationship and broadening of our interests across... that has continued in the 20 years since then," she said.

"I look forward to promoting American business, to working with the Indian community that wishes to invest in the United States, because it truly is a bilateral relationship at this time -- a two-way street," Powell added.

The ambassador told the guests, several of whom were Indian-American community leaders and entrepreneurs, that, "I look forward to having a chance to meet all of you in the future as I come back, and I look forward to inviting you to meet with me when you come to India."

"Many of you who have visited the American embassy know that the residence of the American ambassador in India is known as Roosevelt House," she said. "I am sure that (the famed economist and once US ambassador to India) John Kenneth Galbraith probably brought a bust of (US President from 1933 to 1945) Franklin Roosevelt and then the next Republican ambassador brought one of (US President from 1901 to 1909) Theodore Roosevelt." 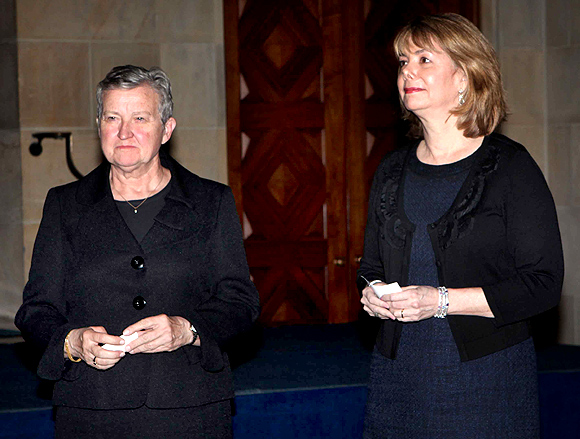 "As the first American woman ambassador, I am bringing one of Eleanor Roosevelt," Powell added, and pointed out that "in looking at this, I discovered that Eleanor Roosevelt made a trip 60 years ago to India."

"She traveled throughout the Middle East, then on to Pakistan, to India, and to Nepal -- so it must have been quite an adventure in 1952," she said, speaking of Franklin Delano Roosevelt's wife.

"I have been inspired by her and her observations of India in 1952," Powell said, "many of them would be very familiar to all of us. She saw an enormous potential for American and Indian friendship and I look forward to working with you to make that potential a reality."

Powell recalled "a very, very long lunch," with India's Ambassador to the US Nirupama Rao on April 6.

"We found that we have many, many things in common, including the challenges that both of us face while fulfilling the expectations of our governments, our people and our commercial communities," she said. 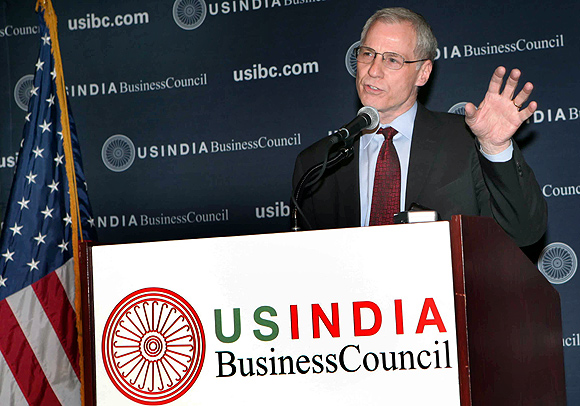 Former US Trade Representative Susan Esserman, a board member of the USIBC, who introduced Powell, said, she "comes to this position with an unparalleled wealth of experience in South Asia matters."

Esserman pointed out that Powell "is the first foreign service officer to serve as ambassador to India, ambassador to Pakistan and ambassador to Nepal. She has also served as the national intelligence officer for South Asia at the National Intelligence Council and as the deputy chief of mission in Bangladesh."

Ron Somers, president, USIBC, who along with Esserman and several senior members of the Council's executive board, briefed Powell about the US business community's interests, issues and concerns in their trade, commerce and investment in India before the reception, described it "as a very useful and productive session."

"American businesses believe joining (hands with their) Indian counterparts is the foundation of this partnership and of this relationship, on top of which we crown it with a strategic partnership," Somers said.

"So," he continued, "we want to continue with the exciting and inspiring commercial and trade relationship between the world's two largest free market democracies."