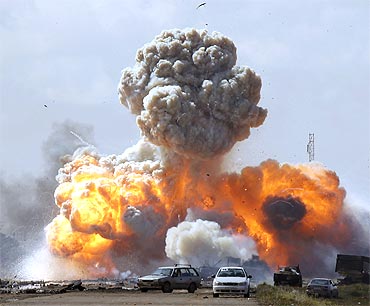 Coalition airstrikes bombed Libya's air defence systems for a second night in which a missile flattened a building housing Muammar Gaddafi's command centre very close to his private residence in Tripoli, even as the United States insisted he is not on the target list.

The missile launched during operations by the United States and European forces to patrol the no-fly zone destroyed what one coalition official described on Monday as Gaddafi's "command and control capability" inside the Libyan leader's compound at Bab el-Aziziya in south of capital Tripoli.

It was unclear where 68-year-old Gaddafi was at the time of the strike on his air defences as part of a renewed allied assault on Libya involving British submarines and Royal Air Force Tornado jets.

We are not going after Gaddafi: US 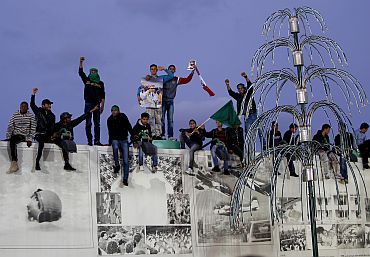 The three-storey administrative building which was flattened is about 50 metres from Gaddafi's iconic tent where the Libyan strongman generally meets guests in Tripoli. It was hit by a missile, Libyan government spokesman Moussa Ibrahim told mediapersons who were taken to the site by bus.

"This was a barbaric bombing which could have hit hundreds of civilians gathered at the leader's residence about 400 metres away from the building which was hit," Ibrahim said. Smoke was seen rising from within the heavily fortified compound which houses Gaddafi's private quarters as well as military barracks and other installations.

A Libyan official displayed to reporters a piece of shrapnel, apparently from the missile, at the ruined building. Pentagon spokesman vice-admiral William Gortney, at a news briefing in Washington, DC, said, "We are not going after Gaddafi. At this particular point I can guarantee he is not on the target list."

No evidence of civilian casualties: US 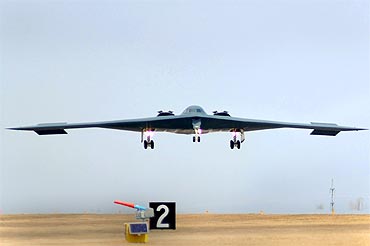 Gortney also said it had no evidence of civilian casualties in airstrikes by coalition forces over Libya. "There is no indication of any civilian casualties," he insisted in comments that came after Tripoli's official media said the airstrikes were targetting civilian objectives and that that there were "civilians casualties as a result of this aggression."

In contrast to the US position, British defence secretary Liam Fox suggested that Gaddafi was a legitimate target, so long as steps were taken to avoid harm to civilians around him. Asked about Fox's remarks, Gates said it would be "unwise" to have coalition forces try to kill Gaddafi in military strikes in Libya and that the allied operation should stick to the parameters as authorised by the UN Security Council.

"I believe that it's important that we operate within the mandate of the United Nations Security Council resolution," he said.

"What has happened in Libya differs from the goal of imposing a no-fly zone," the Arab League's secretary general Amr Mussa said. 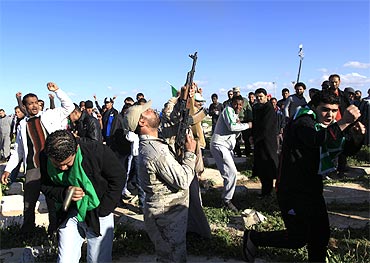 "What we want is the protection of civilians and not bombing other civilians," Mussa said. Asked about criticism about the air strikes from the Mussa, Gates said he was reassured by renewed support for the operation by the bloc.

Gates said governments were discussing how best to organise the military command of the operation, with Arab States reluctant to have a North Atlantic Treaty Organisation flag over the intervention. Gates, who was speaking on a US military plane en route to Russia, said the intervention was backed by "a very diverse coalition" and warned that expanding its goals could complicate the consensus around the UN resolution.

"If we start adding additional objectives then I think we create a problem in that respect," he said. "I also believe it's unwise to set as specific goals things that you may or may not be able to achieve." Initially, the goal was to shut down Gaddafi's air force to safeguard civilians, he said.

We want to prevent slaughter of Libyan people: US 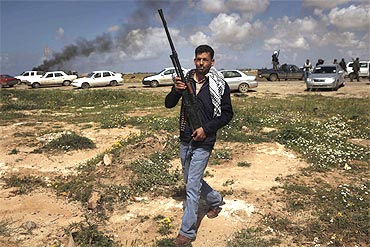 "The key is to first of all, establish the no-fly zone, to prevent Gaddafi from using his military forces to slaughter his own people," he said. Gates also said the US expects to turn control of the Libya military mission over to a coalition probably headed either by the French and British or by NATO "in a matter of days."

In his first public remarks since the start of the bombings, Gates said President Barack Obama felt very strongly about limiting America's role in the operation, adding that the president is "more aware than almost anybody of the stress on the military."

Gates's comments came as American ships and aircraft continued to pound Libya, taking out key radar, communications and surface-to-air missile sites along its Mediterranean coast. Even as his military was under siege, Gaddafi has vowed to endure through a long war against what he called "colonial crusader aggression" by the international coalition.
© Copyright 2021 PTI. All rights reserved. Republication or redistribution of PTI content, including by framing or similar means, is expressly prohibited without the prior written consent.