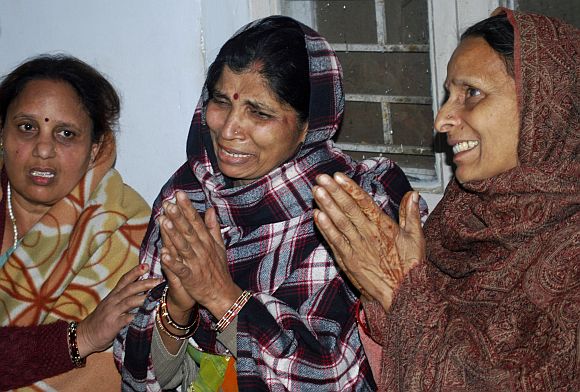 The death toll in the stampede at Allahabad railway station reached 36 on Monday, with 14 more people succumbing to their injuries.

Many injured are being treated at the railway hospitals and the SRN Hospital here, he said.

The victims include 26 women, 9 men and a child, official sources said, adding bodies of 20 of the deceased have been identified.

The stampede occurred at 7 pm on Sunday at Platforms No 5 and 6 where thousands of passengers, mostly Maha Kumbh devotees returning after taking the holy dip at the Sangam, had gathered to board a train.

Special helpline numbers have been issued by the Railways for the distressed to know about their relatives: 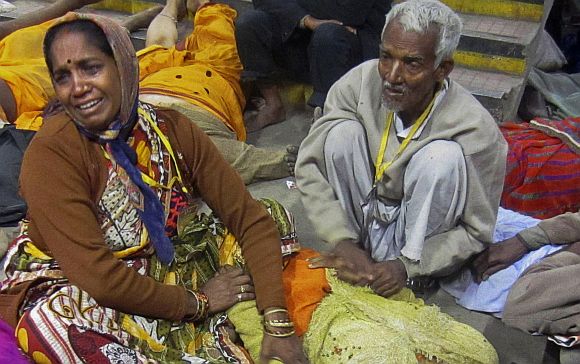 Eyewitnesses said the stampede at Platform No 6 was triggered near a foot overbridge when hundreds of passengers rushed to board a train whose arrival was being announced in a public address system. Platform No 6 was later sealed by authorities.

The bodies of some of the victims shrouded in white cloth were kept at the platform for several hours.

Several eyewitnesses said there was a lathicharge by the police that compounded the panic, but Divisional Railway Manager Harinder Rao that claimed passengers were not baton charged and that police only attempted to regulate the movement of the crowd at the platforms by asking passengers to stand in line.

Preliminary reports said the stampede broke out when the railing leading to a footbridge collapsed but Railways Minister P K Bansal discounted such a possibility saying this had not happened.

Bansal said overcrowding at the platforms may have led to the stampede. A police officer said an estimated 4,000 people were present at one single point at the site where the stampede occurred. 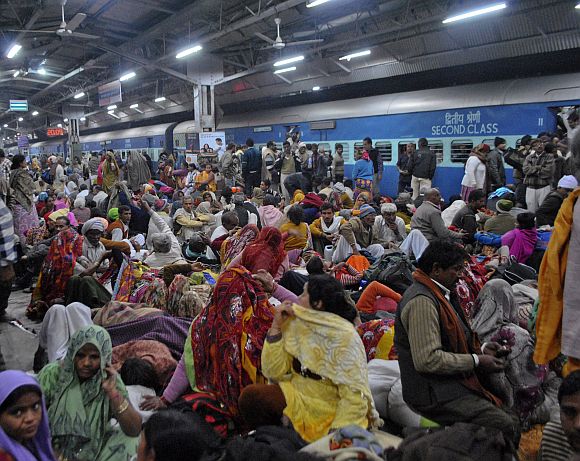 Prime Minister Manmohan Singh condoled the loss of lives in the tragedy and instructed Railway ministry to provide all possible assistance.

The UP government ordered an inquiry into the stampede and asked the Railways to make proper arrangements to clear rush of devotees and sanctioned an ex-gratia of Rs five lakh to the kin of each of the dead persons.

Over three crore people had converged for a holy dip on the occasion of 'Mauni Amavasya' on Sunday, a day considered the most auspicious day during the 12-yearly congregation. A total of 112 trains routinely passes through Allahabad and an additional 49 special trains were being operated. 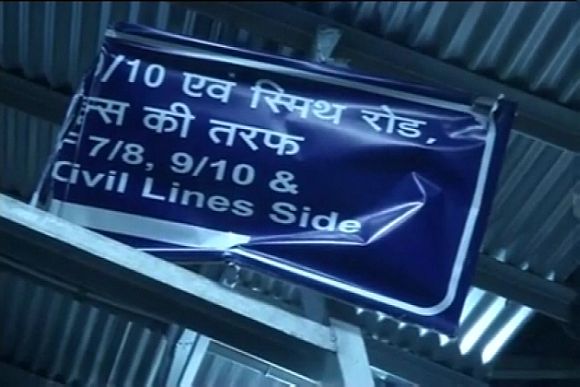 Both the DIG Railway and the DRM have denied reports that a portion of the banister collapsed under the weight of passengers jostling for space on the over-bridge.

Following the mishap, the railways suspended movement of trains for a couple of hours to carry out the relief work.

According to sources in the railway hospital and the SRN Hospital, most of the injured, which include around 10 women, were from eastern Uttar Pradesh and Bihar who had come to the station on foot in view of the massive traffic restrictions near the Kumbh Mela site.

BJP leader Uma Bharti, who visited the accident site and later met the injured, questioned the arrangements made by Railways ahead of the religious gathering.

Meanwhile, a number of volunteers have joined the relief work and are offering assistance at the railway station, the railway hospital and the SRN Hospital.