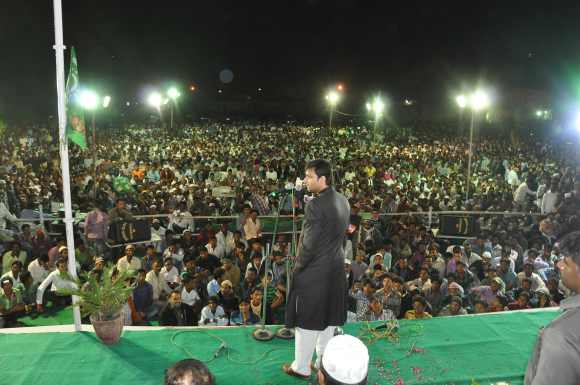 Majlis-e-Ittehadul Muslimeen legislator Akbaruddin Owaisi is under fire for the alleged "hate speeches" he delivered at Nizamabad and Nirmal in Adilabad district against the majority community.

What are your thoughts on the speeches delivered by Owaisi?

Zafarul Islam Khan: It was clearly a hate and rash speech in which words that should never have been uttered by a responsible person, let alone a political leader, were used. It was a Muslim version of the speeches delivered by Praveen Togadia (president of the Vishwa Hindu Parishad) and (BJP MP from Gorakhpur) Adityanath.

Lateef Mohammad Khan: This is routine Andhra Pradesh politics; there's nothing new in it. It was not Owaisi's speeches but just a repetition of the words spoken by Ram Jethmalani. It was a political speech, and it should be seen in the scenario of the changing political situation of Andhra Pradesh. For decades, such speeches have been heard from both the communities. This trend was started by the VHP and Rashtriya Swayamsevak Sangh.

'Speech was against Andhra govt's discrimination of Muslims' 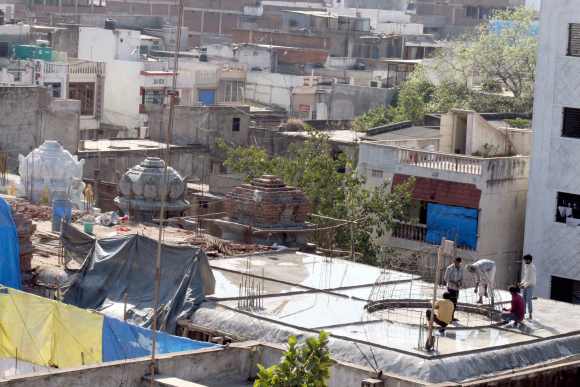 Image: The construction of a temple near Charminar
Photographs: SnapsIndia

Does the Muslim community in Hyderabad get swayed by such speeches?

ZK: Akbaruddin Owaisi was making an electoral speech in anticipation of the assembly elections in Andhra next year. The two-hour long speech is against the Kiran Kumar Reddy government and how it has been discriminating against Muslims, be it in the housing sector, distribution of water or electricity, jobs. But the immediate provocation was the Reddy government's refusal to remove the illegal temple, which has cropped up on the outer wall of the historic Charminar, and Togadia's threat that he will make Hyderabad into Ayodhya.

LK: The present atmosphere in Andhra Pradesh is communalised due to growing Hindutva under the garb of the Telangana movement. Muslims are under attack in every part of the state.

Muslims have lost confidence in the state government. They feel helpless; their emotions are high. One thing deeply rooted in the minds of the Muslims is that secularism is only a word in India and it cannot be implemented in a practical manner. Muslim masses are not influenced by such speeches because they are aware of the ground reality.

'Owaisi will now be recognised as a national leader' 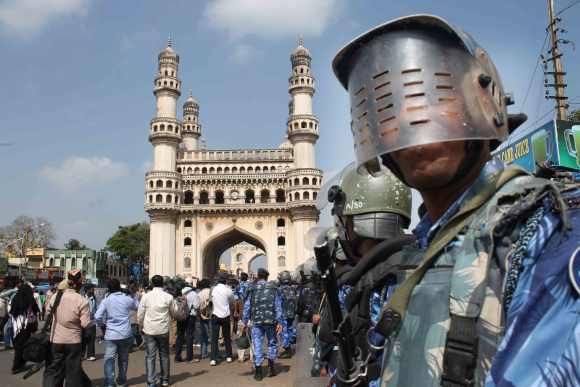 Image: Security has been beefed up near Charminar following the controversy over the temple
Photographs: SnapsIndia

What sort of acceptance does Owaisi have among the Muslims in the rest of the country?

ZK: Owaisi and his party, the Majlis Ittehadul Muslim, are limited to the old city of Hyderabad, but recently they won some seats in the municipal elections in Nanded, Maharashtra.

LK: Akbaruddin Owaisi is the MLA from the Chandrayangutta constituency of Hyderabad. He is the floor leader of the MIM. At present, he does not have the status of national leader but now surely he will be recognised as national leader due to Shabnam Hashmi's unwise interference. (A social activist, Hashmi, filed an FIR against Owaisi for his speeches.) Whatever fame he gets now, that credit will go to Hashmi.

The people of Old Hyderabad have often complained about the lack of development. In such a scenario how do such speeches help?

ZK: In fact, the thrust of the whole speech is that the minority should not trust the Congress because it has done no developmental work in the Muslim areas. Old Hyderabad is now in a very dilapidated condition while an ultra-modern new Hyderabad is taking shape. The blame should go to the state government for ignoring the historic part of their capital.

LK: This speech is not related to the development issue but it was a political speech. It was not even delivered in Hyderabad. When the RSS and Hindu Vahini deliver similar speeches in rural areas, Muslims there get upset and are afraid.

'Mecca Masjid blast was an attack on Muslims, their identity' 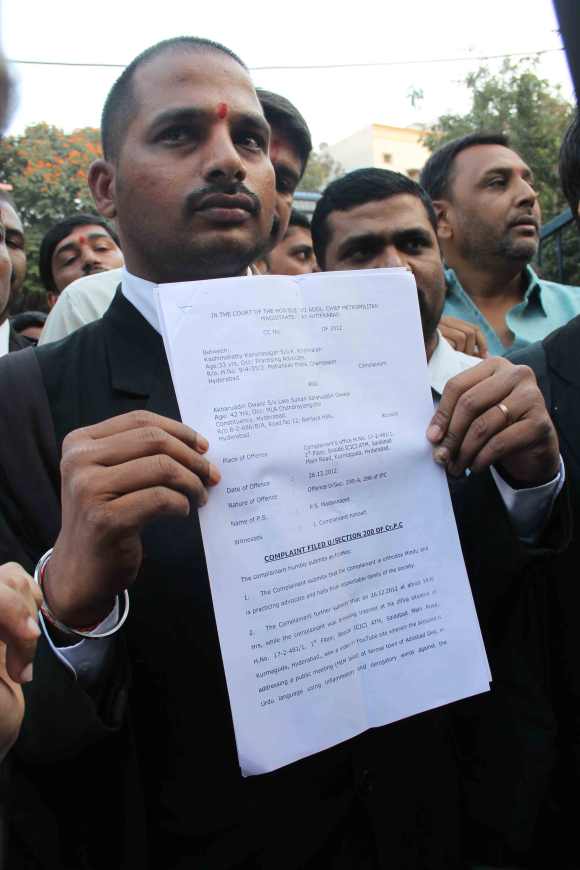 When hundreds of Muslim youths were arrested in connection with the Mecca Masjid blast, Owaisi was not much in the picture. Why do they still see him as their leader?

ZK: It is true that the Owaisis were not in the forefront of the earlier agitation against unjust arrests made under the guise of fighting terror. But like many in the community, they too felt that there was some truth in these stories. The government agencies cannot perpetrate such a huge fraud. But now the Owaisis are clear that 99 per cent of the stories were fake and cooked up by communal elements in the police and the Intelligence Bureau. They realise that the youths were forced to confess following torture in custody. That's why so many youths are getting acquitted after having spent years behind bars.

LK: The terror attack on Mecca Masjid was a unique; it was an attack on Muslims and their identity. The people who died were Muslims, the police fired on Muslims, and the people blamed, accused and arrested were also Muslims. So in those hard times, the religious and political leaders lost their wisdom, courage and were unable to understand the situation.

Hindutva terrorists wanted to create a situation like this to eliminate Muslim identity and leadership. This is when the Civil Liberties Monitoring Committee took up the campaign and exposed Hindutva terrorism.

'Modi is a danger to BJP and India' 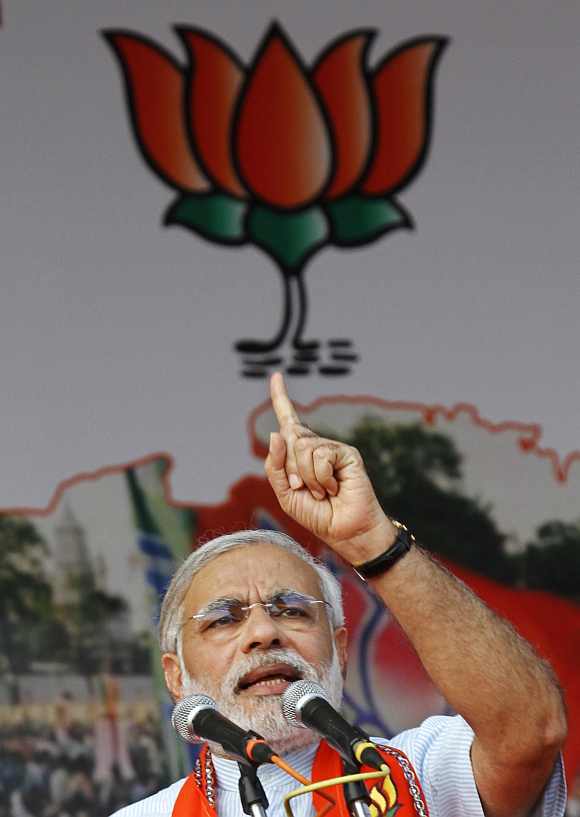 But what provoked Owaisi to make such a speech?

ZK: The immediate provocation was and remains the illegal temple allowed to come up near Charminar, which is a landmark structure and the identity of Hyderabad.

LK: There was provocation by the Hindutva forces, but Muslim leaders tolerated it and their patience ran out. Communal emotions are very high in Andhra Pradesh due to the Telangana movement and the inactiveness of the Reddy government.

There are references to Gujarat Chief Minister Narendra Modi in the speech. Do Muslims still view him as a threat?

ZK: Modi remains a bete noire for Muslims. Unless and until he apologises to the community and makes good all the injustices he has done in the past decade to Gujarat Muslims, by rehabilitation, just compensation and justice to the victims of the 2002 pogrom, there is no question of changing our view about him. He and his party know that he is not a "danger" to Muslims alone but to the BJP and to India. His acts of omission and commission are now an albatross around his and his party's neck just like demolition of the Babri masjid was and remains an albatross around the neck of L K Advani.

LK: Of course, Modi has committed a major crime. Not only Muslims but also many non-Muslims view him as a danger to life and liberty.

'It's the responsibility of majority community to prove their secularism' 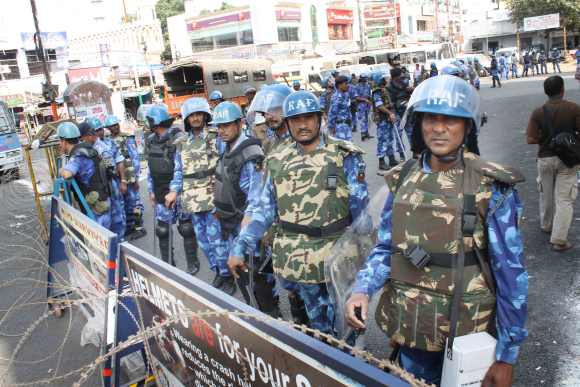 This looks like a never-ending battle. Now the Hindus may react. Where does all this end?

Our system too works selectively. Muslim perpetrators of the riots of March 1993 were rigorously pursued, tried and jailed and rightly so, but the police and Hindu perpetrators of the anti-Muslim riots in December 1992 and January 1993 (which provoked the March 1993 riots) remain untouched. The Srikrishna Committee report on Telangana collects dust to this day.

Look at the Hindutva crusade by the VHP, Bajrang Dal and umpteen extremist organisations like the Abhinav Bharat, Ram Sene and Sanatan Sanstha etc. There has been no proper probe into their activities and they are not banned.

But the Students Islamic Movement of India, whose first ban order never claimed that it was a terrorist organisation or had committed a single terrorist act, remains banned to this day.

Thousands of Muslim youths have been arrested, tortured and thrown into jails on fictitious charges but Muslim protests make no dent into this crusade. For years, Hindutva leaders had repeated ad naueum that not all Muslims are terrorists but all terrorists are Muslims. Now this has been reversed.

The ingenious strategy was simply superb: commit terrorism in such a way that Muslims will get blamed -- they will suffer in the blasts and will get caught also for the same! Yet our government will touch only a few small fries while the big ones are roam free. Persons like Indresh Kumar and Togadia, mentioned in Malegaon and Ajmer chargesheets, are untouchable.

LK: This is not a new batt#8804 it started when the British entered India. Hindutva elements under the banner of the Hindu Mahasabha supported attacks on Muslims. The main accused in the demolition of Babri Masjid became the deputy prime minister of India. So this is a never-ending battle, which is the nexus of Hindutva fascism, Israeli Zionism and American imperialism.