'A small spark can cause an explosion on a submarine' Admiral Arun Prakash, who was the chief of naval staff from 2004 to 2006 and is today a leading strategic expert, feels that one should patiently wait for the Navy to finish the inquiry into the explosion and fire aboard the INSSindhurakshak before jumping to any conclusion. “For the media to speculate on unsubstantiated rumours is not correct,” he tells Vaihayasi Pande Daniel on the telephone from Goa, where he has been living post-retirement.

The former Navy chief, who had served aboard the first INS Vikrant and has been decorated with a Vir Chakra, describes the environment aboard a submarine as “dangerous,” and talks of what can go wrong on one.

What kind of safety measures are usually practiced on board a submarine? What can go wrong?

The submarine arm (of the Indian Navy) is a very professional arm because they live in a very dangerous environment.

The submarine is basically a long metal tube, with a lot of weapons, fuel and a huge bank of batteries in it. So it is a very dangerous environment. The submariners have very strict and rigid safety rules. In everything they go by the book. By the drill.

So this kind of accident is very, very rare and unusual.

For it to happen, possibly some malfunction has taken place.

So basically the rules are in place, they are well known and they are followed very, very rigidly.

'It is too early to say what went wrong' 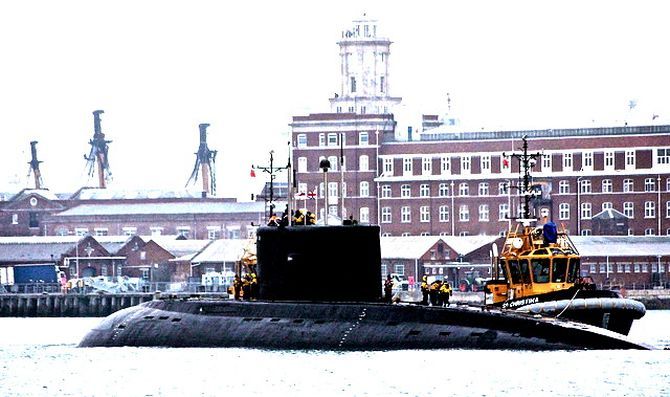 Under what circumstances do explosions take place?

These batteries are required to run the motors, the submarine, underwater.

These batteries have to be charged when they are in harbour. When the batteries are being charged they release hydrogen gas. The hydrogen gas on its own is quite dangerous. A small spark can cause an explosion.

There are systems on the submarine which clean out this hydrogen. It is absorbed so it does not become a dangerous element.

If this system has malfunctioned, and there was a spark, this could be one of the reasons for an explosion on a submarine.

Any other reason that has not surfaced yet?

It is too early to say.

I have only seen television pictures. It is too early too say.

These are the probable causes. Very difficult for anyone outside to speculate.

What kind of weapons are aboard?

Torpedoes and missile. For missiles there is fuel. And there are explosives. Warhead is an explosive.

'Unlikely that anybody could have survived such a massive explosion' We are hoping for the survival of some of the crew. Are the chances good? How many people does a submarine the size of Sindhurakshak accommodate ordinarily?

Fortunately the full crew was not on board last night. Only the people involved with the work which was going on.

Chances are slim but one can’t say until you actually…

So you are saying that the environment is so dangerous that definitely all standard operating procedures would have been followed very strictly because everyone knows that that is the only way to survive on a submarine?

Is there any connection with the fact that it just came back from Russia where it was refitted? That fact has been brought up over and over again.

It underwent a major overhaul, in which all the systems are overhauled and repaired, if required. If that repair was not done properly then possibly one of them could have failed.

And this was only about six months ago.

Does it point towards that? What do you feel?

This is an area that we must look at.

Some malfunction has taken place, some system has not performed properly, they will look at that system and when it was last repaired and who repaired it and those kinds of things.

It is one area that should be investigated. But there is no indicator at this moment. 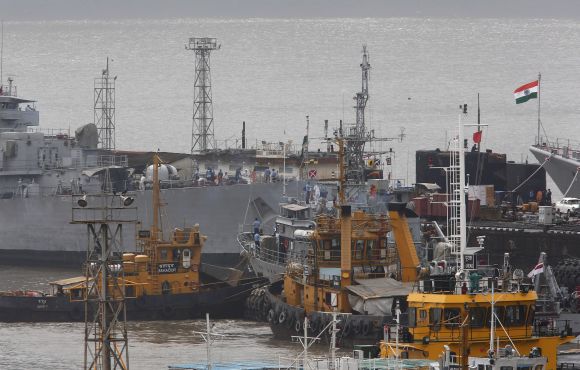 Would you call this one of the worst submarine tragedies?

In our Navy, yes.

Other navies have had much worse.

The Russians had a submarine (the Kursk) which blew up under water and they lost a 118 people and they did not know what caused it. It took them six months to fish the submarine out from underwater.

Of course, there have been many other such accidents. Submarine-wise this is not the worst.

But for our Navy, yes.

I called the company Zvyozdochka in Russia, where Sindhurakshak was refitted. They said they did not have anything to say.

What do you expect them to say. (Laughs). It may not be their fault at all. It maybe some human error. It is too early. Just 12 hours ago. When there are so many factors at play. It will require a detailed investigation. We shouldn’t jump to any conclusions.

Are our submarines in good shape?

Is there anything you would like to say about this situation?

I would only say that it is very sad that it should have happened.

We should patiently wait for the Navy to finish the inquiry before jumping to any conclusion.

They are going through a trauma.

For the media to speculate on unsubstantiated rumours is not correct.