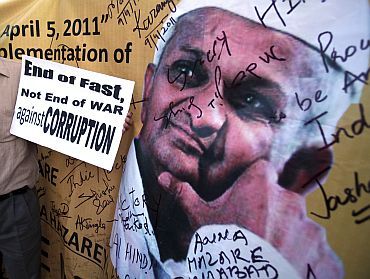 Many MPs think that in less than five years the Lokpal will become the most corrupt institution in India. Sheela Bhatt reports.

The political class of New Delhi has rarely been as uncomfortable with the process of law-making as it is today.

Prime Minister Manmohan Singh and Finance Minister Pranab Mukherjee will give the Lokpal Bill, 2011, a final look before taking it to the Cabinet, which is likely to meet on Tuesday afternoon.

The bill may be introduced in the Lok Sabha latest by December 22, 2011, says the minister dealing with the process.

The bill was tabled in Parliament on August 4, and then sent to the Standing Committee. It was feverishly discussed by the 30 member-strong Standing Committee. The committee's suggestions and the government's rethinking on it has resulted in 60 plus amendments.

A visit to Parliament these days is a fascinating experience. So much is happening to prevent Kisan Baburao 'Anna' Hazare from going on yet another fast!

A Bharatiya Janata Party leader, a member of the Rajya Sabha said, "It is remarkable that the government and Parliament has been brought to its knees by Anna Hazare. It is amazing to see that the Lokpal Bill is ready and all the political parties more or less agree with the government's bill except on the issue of the status of the CBI (Central Bureau of Investigation). The government has agreed on on so many issues that there is nothing remaining except the sticking points related to the CBI. The Lokpal issue has traveled quite a distance."

How will the BJP trap the Congress inside Parliament? 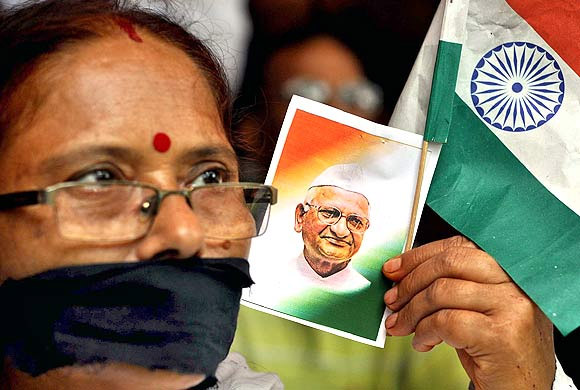 Pawan Bansal, India's parliamentary affairs minister, says, "Political parties will surely have a few problems with some issues of the Lokpal Bill. But I think that this bill will muster the necessary strength in the Lok Sabha unless people who are totally against it create trouble."

"By and large, there is agreement over the Lokpal Bill in the Lok Sabha. Nobody is likely to oppose it," he adds.

However, on the Lokpal issue, nobody trusts anybody.

While nobody wants the Lokpal bill, everyone wants to take credit for it if it becomes a reality.

The Congress party knows that even if its government gets the Lokpal Bill passed, it may be blamed for bringing about a weak Lokpal.

Both the Congress and BJP are keeping its fingers crossed. The Congress wants to pass the bill to claim that it fulfilled its promise to Anna Hazare and contributed immensely in the people's fight against corruption.

If the bill is not passed, the government wants to ensure that blame does not fall upon the Congress.

If the bill is passed and it gets reasonable acceptance, then the BJP loses its political plank to check the government through Hazare's anti-corruption movement.

Also, the BJP will ensure that amongst Team Anna's supporters the party is not perceived as an active partner in the Congress-led government passing a "weak Lokpal Bill."

Congress leaders continue to perceive Hazare's anti-corruption movement of having a hidden sub-text. They are convinced that Team Anna is essentially "anti-Congress."

It is not Congress General Secretary Digvijay Singh alone who believes that the Rashtriya Swayamsevak Sangh is behind Team Hazare. Many Congress leaders feel it is in the BJP's interest to see that Hazare's movement stays alive.

These leaders believe the BJP would never allow a full stop to the Lokpal debate. They are anxious to know how the BJP will "trap the Congress inside Parliament once the Lokpal Bill is put to vote."

Congress bringing Lokpal Bill only to cut its losses 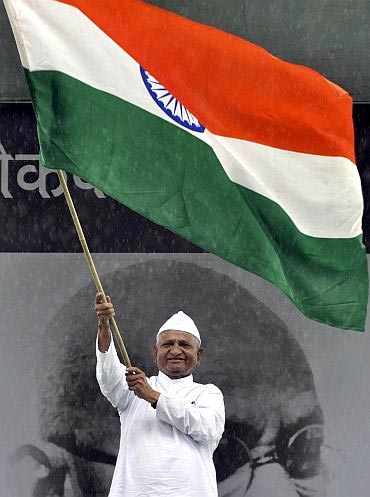 Congress activists are frustrated to see that the political challenge posed by Hazare has been so badly handled by party leaders.

A senior Congress leader from a southern state, who despises the idea of a Lokpal, says, "Our leaders in New Delhi have failed the nation. The country is paying the price in terms of the Lokpal Bill that is not going to help tackle corruption."

An allergy to Hazare runs so deep amongst Congress leaders that when he was awarded the 'Indian of the Year' prize by the CNN-IBN television channel in New Delhi last week, no Congress leader or minister turned up at the event.

These days, some Congress leaders look as if they are weighed down by Team Anna's psychological onslaught. Hazare's "intimidating" presence is very visible in Parliament.

Why then are the MPs doing something they don't believe in is the question.

Are they afraid of Hazare or adverse media coverage?

Mention of Hazare is enough to annoy and irritate many MPs these days.

The Congress party, it appears to this observer, is bringing about the Lokpal bill only to cut its losses as it is passing through bad times. 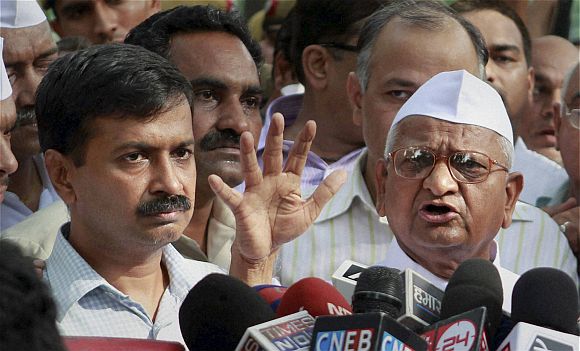 Congress leaders do not want the "nuisance" of yet another Hazare fast to once again dominate news television coverage.

An influential Congress leader told this observer, "Under Anna's pressure, the system of Parliament has carved out a bill that is not at all trying to 'appease' Anna Hazare. It is a bill without the insane elements of the Jan Lokpal Bill."

After so much being done to shape the Lokpal Bill, no Congress leader is in a position to say with confidence that the bill will become a law in a couple of days.

The United Progressive Alliance government does not have a majority in the Rajya Sabha. If the Lokpal Bill is passed in the Lok Sabha with the UPA's 278 votes, then Congress leaders feel the ball will be in the Rajya Sabha's court.

Many leaders say the Lokpal Bill will confront the same fate of the Women's Bill. The coming 48 hours are crucial for the Lokpal Bill's trajectory in Parliament.

During the last week, Congress leaders have calculated two options. Will the charge of carving a "weak Lokpal Bill" hit the party and the government more than the charge of failing to pass the Lokpal Bill?

All political managers and Team Anna think the trajectory of the Lokpal Bill will be a closely monitored affair and the media will play a big role in shifting blame.

What one could gather inside Parliament on Monday was clear. Even if the Lokpal Bill is tabled in Parliament there are many roadblocks.

If the Lok Sabha passes the Bill, there is a possibility (not necessarily that it will happen) open to any non-UPA party in the Rajya Sabha to move a small or big amendment to the Bill.

In that case, the bill will have to go back to the Lok Sabha and if that amendment is rejected by the Lok Sabha, then there is the possibility of calling a joint session of Parliament.

There will be many anxious moments before the Congress and BJP finally decide their positions. Only after the final copy of the bill is approved by the Cabinet will the real politics commence.

'Lokpal will hike the rate of corruption in India' 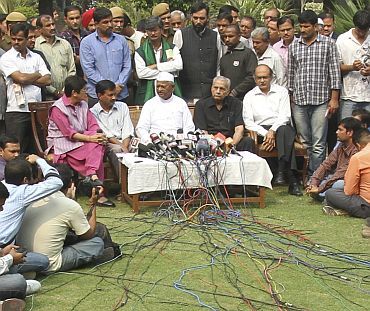 The BJP is watching the government's every step on the Lokpal Bill very closely. The party supports the Lokpal Bill to capitalise on the public anger against corruption.

The BJP's opportunistic streak is exposed because, like the Congress, its leaders have many reservations against Hazare's Jan Lokpal Bill, but they don't want to take a long-term view on the issue.

Within the BJP, Sushma Swaraj has of late been upset with Team Anna, while Arun Jaitley has taken a position that has been appreciated by Team Anna.

BJP President Nitin Gadkari has adopted the populist strategy of supporting the Lokpal Bill, keeping in view the Uttar Pradesh assembly election. He played a major role in forcing his party's government to pass the radical Lokayukta Bill in Uttarakhand.

In fact, there is an anomaly in the bill passed by the Uttarakhand assembly where the district-level judiciary has been placed under the Lokayukta's purview, a violation of Article 235 of the Constitution, a legal expert told this observer.

In Parliament, no one talks about the Lokpal with vigour.

Privately, an overwhelming majority of MPs think that in less than five years the Lokpal will become the most corrupt institution in India.

Hardly any MP has an idea how the Lokpal's 35,000 plus force will be monitored. Who will check its corruption, if any, and how.

According to a Congress minister who deals with scores of political parties, 90 percent of parliamentarians in the Lok Sabha and Rajya Sabha don't see a need for the Lokpal the way it is shaping up.

The minister says all the parties are indulging in double-speak. The frightening truth is that very few MPs have a real idea of what kind of actual effect the Lokpal will bring about in governance.

Some MPs say the Lokpal will be like the Gestapo, Nazi Germany's dreaded police force. Some MPs ridicule it as an Indian version of the ISI, Pakistan's feared intelligence agency.

While talking to journalists, a leader from Maharashtra said, "The Lokpal will hike the rate of corruption in India."

This observer spoke informally to a few MPs inside Parliament on their views on the Lokpal. Without exception, all of them said it would increase corruption!

A BJP MP and a Congress minister felt corrupt officers in the bureaucracy would pay heavy bribes to withdraw complaints filed against them in the Lokpal's office.

It is shocking to see such lack of faith among many MPs in the Lokpal. Still, these MPs will vote for the creation of the Lokpal.