A comic book that gets inside Ravana's head 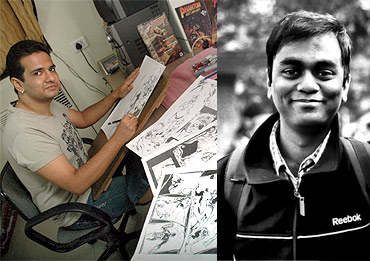 Ravanayan, a graphic novel created by comic book writer Vijayendra Mohanty and artist Vivek Goel, attempts yet another re-telling of the timeless Ramayana.

So what's new? This graphic novel explores the epic from the point of view of Lord Rama's arch-enemy, King Ravana.

In an interview with Sanchari Bhattacharya, Mohanty, formerly a copy editor with rediff.com, talks about the challenges of creating a comic book about Indian history's "darkest and most sinister" villain.

Do you think there is a reader base for such comic books in India?

Definitely. If initial feedback to our first issue is anything to go by, very many people have picked it up just because they found the concept intriguing. Besides, something as pervasive as the Ramayana will never be ignored in India. Indians have partaken of mythological fare in the form of Amar Chitra Katha for a long time. Entire generations have grown up reading those tales. More recently, ventures such as Virgin Comics brought Hindu mythology to audiences at home and abroad in a brand new light. So the market for comics based on mythology isn't small and wanting.

What is the target audience for Ravanayan? Which age group are you aiming at?

We have aimed Ravanayan at above-15 audiences. This is mostly because of the tone of the story and some visual elements. To children younger than 15 (or probably 13) it may not make as much sense as it would to people between the ages of 15 and 40. Given that the primary topics being explored in our story are morality and the meaning of right and wrong, we think that is only fair to say.

Don't you think the depiction of blood and gore might attract some flak?

It might, but we don't think it will. The Ramayana finds its culmination at the end of an epic war. I don't think anyone will approach the story of the Ramayana's villain expecting to see no violence. Depicting violence for the sake of violence is something I scoff at, but as a writer, I also need to make some room for the demands of the medium -- comic books, in this case.

My artist partner and co-creator of Ravanayan, Vivek Goel, learned his craft from American comics and his way of visually telling a story is very much rooted in the slam-bang action tradition. As far as the task of making Ravanayan work is concerned, we both have had to adapt and understand each other's storytelling voice.

'Ramayana is rich with life and motivations' 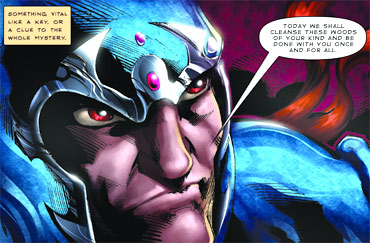 How has the response been to your comic book so far?

As of this writing, Ravanayan is only beginning to appear in book stalls across the country, so a larger picture is yet to emerge. But as far as initial impressions are concerned, we have not been disappointed. Initial reviews have been very encouraging and we have sold hundreds of copies of our first issue through online outlets alone. And all this has been BEFORE the comic's official arrival in the market. So we are being cautiously hopeful.

Which do you think is the most complex character in Ramayana, other than Ravana?

That is a tough question, if ever there was one. But my answer is going to be somewhat cliched -- it depends on who you focus on. The Ramayana is rich with life and motivations and there are thousands of characters in there that we, as average readers, pass by without paying more attention than we would, for example, an electric pole during our evening walk.

But when a storyteller decides to take a second look at any one of them and explores their back stories and looks to find some manner of order in their motivations, even some of the smaller characters can prove to be absolute gold mines. This goes for all characters, by the way. How complex a character is depends completely on how deep you want to look. 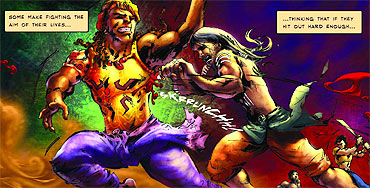 You are extremely active on social networking sites. Do you think they will emerge as an effective marketing channel for a comic like yours?

They already have, in fact. Till date, Vivek and I have not spent a single paisa on marketing Ravanayan. It all just happened by itself, thanks to the viral nature of things on Facebook. Word spread quickly and far. Ravanayan had a sizable base of potential readers even before the first draft of the script had been prepared.

The credit for most of this buzz can be given to some early concept sketches that we shared for free online. Post-launch, Twitter helped us guide a lot of people to the official website of Holy Cow Entertainment and helped us sell more books and spread the buzz even farther. Word of mouth has always been a primary driver for book sales. It's just that, while in another age authors had no control over it, today, social media provides us a priceless set of tools to help maximise possibilities.

'What if Ravana wasn't a monster?' 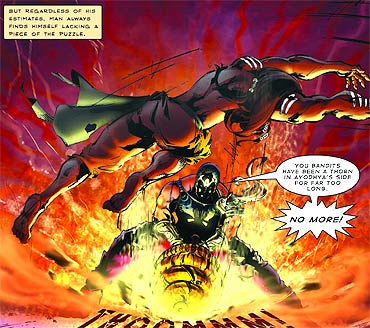 How did the idea of Ravanayan come to you? And, moving from the secure confines of journalism to an untested (in India at least) medium like graphic novels, did you have a first-timer's heebie-jeebies?

The idea for Ravanayan came to be on a sunny day last winter (or was it the winter before that?). I was wondering how we could tell the story of Ravana differently -- mostly because everyone knows the story already. In India, you don't need to read the Ramayana -- you are already in the middle of it when you are born. To try and bring something new to a story like that can be difficult on many levels. We had already decided that our story was going to be told from Ravana's perspective, but I did not see that as bringing enough of a change. I did not want to mess with the events in the Ramayana just for the sake
of sensationalism. So I settled for questioning the way we sit in judgment upon Ravana. Thanks to many simplistic popular retellings of the Ramayana, we consider Ravana an evildoer and a monster. I started writing Ravanayan by making "what if he wasn't a monster?" the basis of my approach.

As for the small matter of me being a first-timer, I don't see my migration from a day job to a more freelance lifestyle as a reason for worry. To be frank, I felt much more insecure about my position in the world when I was working. I felt out-of-place and undeserving of my monthly salary. Now, even though my income is erratic and my job description is something most people would consider weird (I am a blogger / comic book writer), I feel very secure. I am being myself when I am writing stories. The ups and downs of the comic book market make me work harder to get things right, but I never wonder about whether my choice of career was a wrong one. I left that state of mind behind years ago. 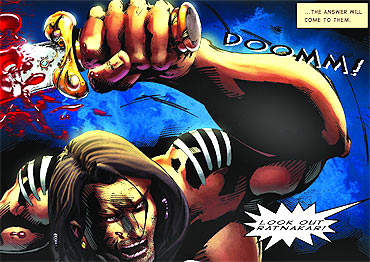 You have come out with the first part of Ravanayan, with 9 more to go. When does the project come to an end?

Ravanayan is going to be a 10-issue comic book series and there will be a gap of six weeks between issues. That's slightly more than a month. At this rate, we hope to be done with the entire story in one and a half years. By the end of 2012, readers should have the final issue of Ravanayan in their hands.

After focusing on Ravanayan, what next? Will Holy Cow focus solely on graphic novels, or expand into other mediums, forms etc? If yes, what is your vision?

Holy Cow Entertainment, for now, wants to stick to comics and graphic novels only. But within comics, founder and chief artist Vivek Goel wants to explore as many genres as possible. His vision is to establish HCE as a solid comic book presence in India and to publish comics for the Indian audience. In doing so, he hopes to give a humble little push to the state of comics in India.