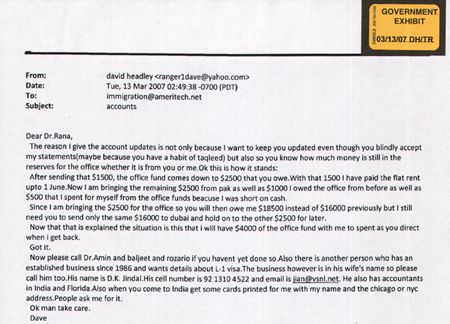 The testimony by 50-year-old Headley, a prosecution witness, came as the trial of Mumbai attacks co-accused and his longtime friend Tahawwur Rana, a Canadian of Pakistani origin, opened in the US at Chicago's Dirksen Federal Building.

Pakistani-American Headley is also a co-accused in the case. 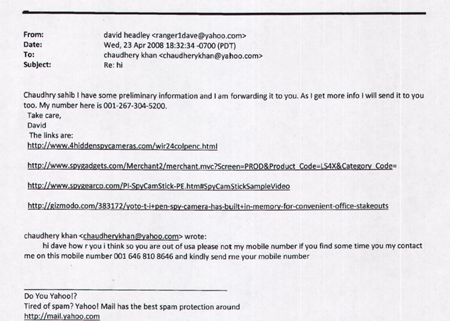 Headley had gone to the Shiv Sena office to build contacts with its public relations officer Rajaram Rege. In his statements, Headley said the ISI provided help to LeT and that he first started training in Pakistan more than a decade ago with the Lashkar.

Headley said LeT chief Hafiz Saeed, the mastermind behind the 26/11 attacks that killed 166 people, motivated him for carrying out a "jihad".

Saeed told him that the satisfaction of one second of "jihad" is equal to "100 years of worship."

LeT operators also chose Headley because he was an American and that people would least suspect him. He also mentioned that Hafiz Saeed and others like Major Abdur Rehman Pasha, Major Iqbal, Zaki Saab, Sajid Mir helped him.

Streicker said that Rana knew all along what Headley was doing with the preparation of the attacks and that "India deserved it".

"Rana knew all along what Headley was doing and defendant moved his business for Headley's terror and plotting of attacks," Streicker told the court.

"Defendant Rana knew about the deadly consequences of his assistance and he did not stop to provide assistance," Streicker added. 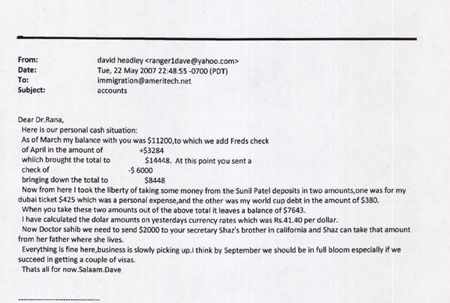 On the other hand, Rana's lawyer Charlie Swift, who has defended the case of Osama bin Laden's driver Salim Ahmed Hamdan, said that Headley was "manipulative leading multi-lives" and maintained three wives.

Swift also played a telephonic call between Abdur Rehman Pasha and Headley in which he made fun of Rana.

Swift said that Headley was a double agent who worked for ISI, CIA and the DEA at the same time. Rana bailed Headley when he got busted for drugs in 1990.

He pleaded guilty in an act of "cleansing of his soul" and thus duped Rana, his best friend from a prestigious military college.

While Rana was a model cadet, Headley was the "bad boy" who did not graduate, his lawyer said. Rana served in the Gulf War with coalition and later went to Germany.

He later immigrated to Canada and moved to Chicago to start businesses. "David Headley is a master manipulator who made a fool of Rana," Swift said.

'I disliked India when I was in Pakistan' 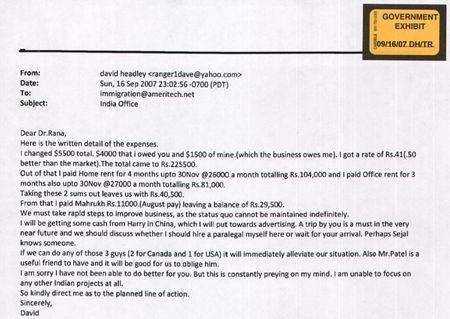 A bald Headley, wearing a blue T-shirt and black jacket, admitted that Rana had helped him conduct the role in the carnage that killed 166 people including six Americans.

"I disliked India when I was in Pakistan and after my school was bombed in 1971," he said.

Headley also said that he did not like the Kashmir dispute and was wanting to get launched in Kashmir but was told to wait for a more suitable job. 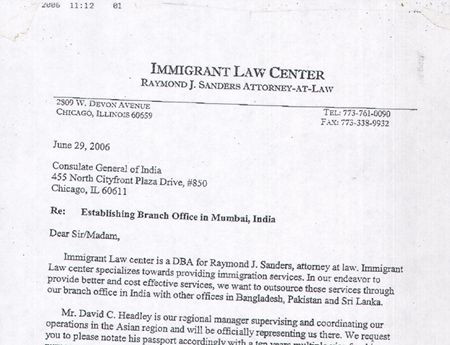 Headley also attended training camps in Suffa and Ama in 2003. He was also associated with Abu Qahafa, who is assistant to Sajid Mir and Muzzamil.

He said Sajid Mir, his handler, and Major Iqbal gave him instructions. Headley said he told Rana about the Salafi movement, books on jihad and also tried to make him embrace the Deobandi movement.

At times Headley spoke too softly so that prosecutor Daniel Cain had to ask him to speak louder. Cain also showed emails Headley had written to Rana and other business letters related to First World Immigration office that Rana had provided Headley as a cover for the terrorist attacks. Raymond Sanders, Rana's attorney, was also mentioned in the letter. 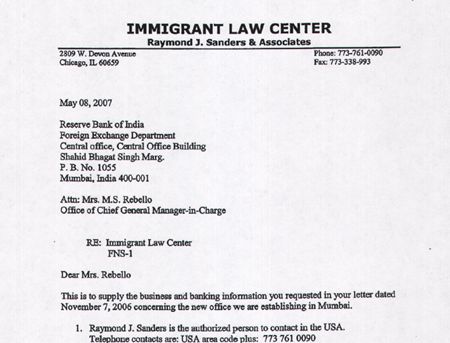 In Mumbai, although Headley opened an immigration office, he never helped anyone get a visa and always used to call Rana.

Headley also mentioned that he met a "Rahul' and 'Vilas' in Mumbai and that Rahul's father Mahesh Bhatt was friendly to Muslims in general.

Headley said he also tried to convince Rana about offensive and defensive jihad. Rana, wearing a greyish brown suit, was looking frustrated and put his hands on his head at times.

Headley also suggested to Saeed that the LeT take the US government to court for categorising LeT as a terrorist organisation.

Headley said that he watched videos of Gujarat riots, Babri Masjid and other incidents with Sajid Mir. After the trial Headley, Rana's lawyer Swift said that Headley did all the attacks under serving ISI officer Major Iqbal.