The TV news anchor arrested and released on bail over a misleading video of Congress leader Rahul Gandhi was not named as an accused in the first information report (FIR) lodged by the Uttar Pradesh, just minutes before they reached his home in Ghaziabad. 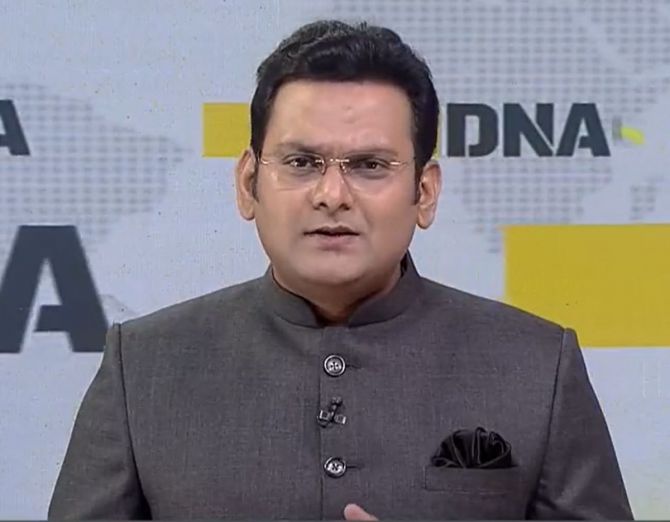 Zee News anchor Rohit Ranjan was whisked away by police from Noida in Bharatiya Janata Party-ruled UP, virtually thwarting his arrest by a team from Congress-run Chhattisgarh that had landed at his home a few hours earlier.

The FIR registered against the journalist in Chhattisgarh lists fewer sections of the law, compared to those mentioned in the Noida FIR, lodged on the basis of a complaint by Zee TV itself.

The television channel blamed two producers for 'knowingly and intentionally' using a statement by Gandhi out of context and said they have been sacked for this.

Only these two producers were named as accused in the FIR lodged by the Noida Police before they picked up Ranjan for questioning in the case, subsequently arresting and then releasing him on bail.

It was not immediately known if his name was added later in the FIR.

The FIR was lodged at the Noida Sector 20 police station at 8.33 am and the anchor picked up from Ghaziabad around 9 am, according to the official document seen by PTI.

Uttar Pradesh's Noida and Ghaziabad police were at loggerheads with their Chhattisgarh counterparts who landed in the national capital region on Tuesday morning with an arrest warrant and a court order against the anchor over the 'doctored video' aired on his show.

While the police team from Raipur in Chhattisgarh reached Ranjan's Indirapuram home around 5.30 am on Tuesday, he was taken into custody first by the Ghaziabad police and then by the Noida police, which had lodged an FIR under Indian Penal Code section 505 (2) (statements creating or promoting enmity, hatred or ill will between classes).

The FIR was lodged on a complaint by V R Venkatraman, an authorised representative for Noida-based Zee Media Corporation Limited (ZMCL).

The complainant said the video statement of Rahul Gandhi was in the context of vandalisation of his office in Wayanad, Kerala.

"However, due to oversight and inadvertence, the aforesaid statement of Mr. Rahul Gandhi was presented out of context in our show DNA, aired on July 1, 2022, which led to widespread protests against the company from various leaders and workers of the Congress Party," he said.

'However, in the given circumstances , the company has a reasonable belief and suspicion that the aforesaid negligence and dereliction of duties may have been committed by Mr. Bikash Kumar Jha and Mr. Narinder Singh knowingly and intentionally in connivance with each other,' the complaint said.

In a statement on Tuesday night, the Noida police said Ranjan was arrested by them as part of an investigation in a case lodged under IPC 505(2).

'Zee News anchor Rohit Ranjan was brought to Noida from his residence in Indirapuram for questioning in the case. After interrogation, he was arrested on the basis of evidence. He has been released on bail as the sections against him are bailable offences. Further investigation in the case is underway,' the Noida Police said.

While his phone has been switched off since Tuesday, PTI's text messages to the TV anchor for his response remained unanswered.

Both the Ghaziabad and the Noida police in Uttar Pradesh are yet to respond to allegations of non-cooperation by their visiting Chhattisgarh counterparts, who stayed put in the national capital region for a second day Wednesday to trace Ranjan.

Kishor Dwivedi
© Copyright 2022 PTI. All rights reserved. Republication or redistribution of PTI content, including by framing or similar means, is expressly prohibited without the prior written consent.