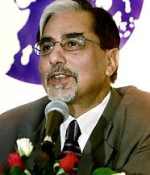 A Delhi court on Friday extended till December 20 the interim protection from arrest granted to Zee Group Chairman Subhash Chandra and his son in the case of alleged Rs 100 crore extortion bid from Congress MP Naveen Jindal's firm by two editors of the news channel.

"Interim protection for the two is extended till December 20," Additional Sessions Judge Raj Rani Mitra said, adding that the court will hear arguments on their anticipatory bail plea on that day.

The order came after Chandra and his son Punit Goenka's counsel, senior advocate Geeta Luthra and Vijay Aggarwal, sought extension of the interim protection as Luthra had to rush to the Supreme Court to argue in another matter listed there.

Luthra said that the passports of her clients are already with the police so there is no chance of their fleeing from justice. She also said that after the interim protection granted on December 6, Chandra and Goenka have joined the probe on December 8 and 9.

"They have not been called for further joining of investigation till today so the interim protection may be extended," she said.

Special Public Prosecutor Rajiv Mohan opposed the request for extension of interim protection saying if the court wants to adjourn the matter, they (police) have no problem in this but it should not extend their interim protection as it expires today.

The Delhi police on Friday filed its fresh status report in the case as directed by the court in its December 6 order. The court, meanwhile, also heard arguments on the regular bail application of Zee News editor Sudhir Chaudhary and Zee Business editor Samir Ahluwalia, who were arrested on November 27.

Earlier on December 6, the court had granted Chandra and Goenka interim protection from arrest till December 14 and had directed them to "join and cooperate" with the probe in the case of alleged extortion bid by two editors of Zee News.

The court had also directed the Delhi police, which had decided to interrogate Chandra and his son Punit Goenka on December 8, to file a fresh report on December 14. It had ordered both Chandra and Goenka to surrender their passports to the police.

The interim protection was granted by the court on the application filed by the father-son duo, seeking this relief or anticipatory bail.

The prosecution while opposing their application had contended that the two jailed editors (Chaudhary and Ahluwalia) have not acted alone and that the whole episode was planned in collusion with the seniors of the Zee group in a conspiracy hatched to extort Rs 100 crore for their channel.

Both Chaudhary and Ahluwalia, presently lodged in Tihar jail, have been booked under section 384 (extortion), 420 (cheating), 120 B (criminal conspiracy) and 511 (punishment for attempting to commit offences punishable with imprisonment for life or other imprisonment) of the Indian Penal Code.