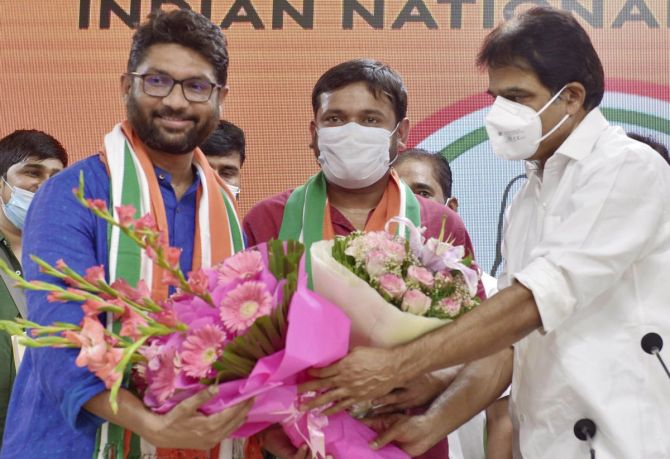 Kumar addressed a press conference at the Congress headquarters in New Delhi along with independent Gujarat MLA and Dalit leader Jignesh Mevani who too extended his support to the Congress ideology and said he would contest the next assembly polls on the Congress symbol.

Asserting that it is detrimental to a country's interests if the Opposition is weakened as those in power become authoritarian, Kumar, who quit the Communist Party of India, described the Congress party as a 'big ship' and said the small boats will survive only when the Congress is saved.

"I have decided to join the country's oldest and most democratic party because I feel along with the lakhs of youths that if the Congress is not saved, the country will not be saved," he said.

Both Kumar and Mevani earlier joined Rahul Gandhi in garlanding the statue of freedom fighter Bhagat Singh near ITO to mark the martyr's birth anniversary.

'In the kingdom of lies, revolution comes from the truth. The new and the old friends will have to participate in this Satyagraha together,' Gandhi later tweeted using hashtag 'BhagatSingh'.

Kumar, who was flanked at the press conference by Congress leaders K C Venugopal, Randeep Surjewala, Pawan Bansal and Hardik Patel, said the country is 'in danger' and 'we need the courage of Bhagat Singh, equality of Ambedkar and unity of Mahatma Gandhi'.

He also took a swipe at Prime Minister Narendra Modi, describing him as 'Govinda of our times who changes his clothes often'.

"I joined the Congress party because I feel it is not only about some people but is an idea and the country needs to ponder over its present and future," he said.

"This country has gone to pre-1947 days. I feel that one should not worry about saving one's bedroom when the entire area is on fire.

"There is a need to save the country. The Congress party is a party which would take forward the ideology of Mahatma Gandhi and Bhagat Singh," he said.

Stressing that only Congress can lead this ideological battle that is being fought in this country, the former CPI leader said out of a total of 545 Lok Sabha seats there are at least 200 seats in the country where there is no alternative to the Bharatiya Janata Party except the Congress.

"I feel the Congress is the biggest opposition party, if it is not saved, if the big ship is not saved, then small boats will also not survive. That is why I cannot move away from this historic responsibility given to me," he said.

Kumar said one should understand the urgency of the nation and parties should set aside their differences to save the nation together.

"This country belongs to all. This left and right is irrelevant as we have to fight the one who is the Govinda of our times, who keeps changing his dress. That is why the priority should be to save the Constitution and the country," he exhorted.

Kumar also expressed his gratitude to the CPI, where he said he was born and brought up and received the strength to fight.

"I was born in that party, but the manner in which it is putting up a fight, its speed needs to be enhanced," he said.

"I exhort the crores of youths of the country that it is not the time to be a fence-sitter, but this is the time of urgency and in such times one should not think whether to go left or right," he said.

If the Congress 'is saved, then the aspirations of crores of youths will be saved, Gandhi's thinking, Bhagat Singh's dream of India and Ambedkar's India of equality will survive', Kumar told reporters.

Kumar had joined the CPI ahead of the 2019 Lok Sabha election and had unsuccessfully contested from Begusarai in Bihar against Giriraj Singh of the BJP.

Training his guns at the Rashtriya Swayamsevak Sangh, he said, "The Congress party is a democratic party....This family is not like the Sangh Parivaar. What kind of 'Parivaar' is that one which is formed by leaving one's own family."

Mevani, who is currently a legislator in Gujarat and represents the Vadgam constituency, is the convener of the Rashtriya Dalit Adhikar Manch (RDAM).

He said there is a sense of urgency to save the country and the youth should create an atmosphere in this regard.

Mevani said he is not joining the Congress due to 'technical reasons' as he is still an independent MLA, but announced that he will contest the next Gujarat election on the Congress symbol and will participate in all Congress activities and campaign for the 2022 Gujarat assembly polls.

"My foremost responsibility is to save our Constitution, our democracy and our Idea of India, as they are all under attack today. I will fight with Congress symbol in 2022 and will participate in all Congress campaigns," he said.

Mevani is a lawyer-activist and a former journalist. Mevani's entry into the Congress comes at a time when it is wooing the scheduled castes community after handpicking the first Dalit chief minister of Punjab.

Charanjit Singh Channi succeeded Amarinder Singh as chief minister of Punjab, seen as a bold step by the party for wooing back the scheduled castes, traditionally considered the vote bank of the Congress.

However, the party suffered a fresh setback in Punjab on Tuesday when state Congress chief Navjot Singh Sidhu resigned.

Earlier, Surjewala praised Kanhaiya Kumar and Mevani, saying they are struggling for the rights of the poor and downtrodden and have questioned the current dispensation.

"They felt that their voice would be strengthened if they joined hands with the Congress part," he said.

Venugopal said it is 'one of the happiest moments' to welcome the two leaders into the party as he described Kumar as a symbol of the fight for freedom of expression in the country.

"The way he fought against fundamentalism throughout his student days will enthuse the cadres of Congress party and the youth. We whole-heartedly welcome Kumar in the Congress party," he said.

He said Mevani is also in the same fight as the Congress and believes in the Congress ideology of carrying everyone along.

"We look forward to working with both in the coming days in defeating fundamentalists and fascist forces that are currently ruling India," he said. 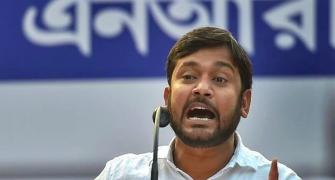 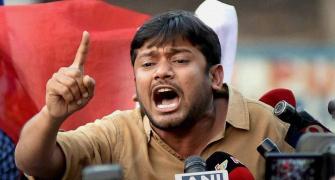 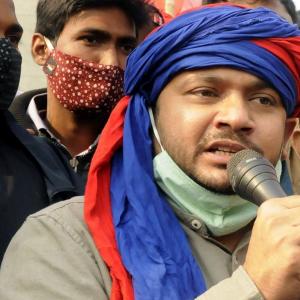