Opposition parties on Thursday launched a vociferous attack on the Centre over its handling of the farmers' agitation, callings its dialogues with the protestors 'monologues', even as the ruling Bharatiya Janata Party defended the new laws asserting that its government is committed to the welfare of peasants and increase their incomes. 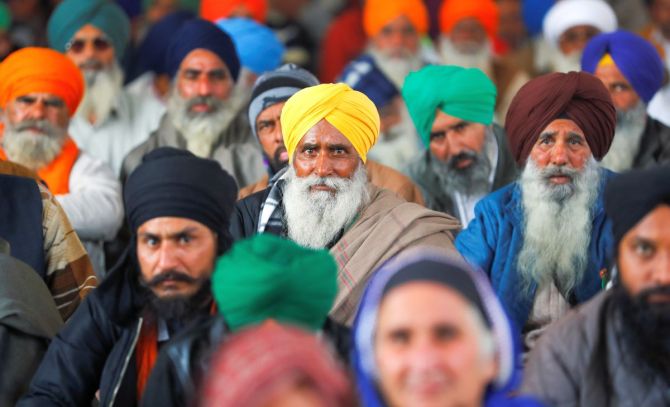 IMAGE: Farmers listen to a speaker during a protest against the farm laws at Singhu border near New Delhi. Photograph: Adnan Abidi/Reuters

Attacking the government, Opposition parties said trenches have been dug, barbed wires put up and spikes installed at the sites of farmers' protests, whereas bridges should have been built to win over them.

The BJP highlighted the farm welfare measures and tore into the shifting of goalposts by the Opposition.

Participating in the debate on the Motion of Thanks to the President's Address, Congress MP Deepinder Singh Hooda said the government has no right to question the patriotism of farmers as they are the ones who have made the country self-sufficient in food.

He hit out at the government saying it should show a big heart and accept the demands of farmers by repealing the farm laws.

"You talk about making (the country) self sufficient. Let me warn you that a self-obsessed government cannot make Aatmanirbhar Bharat (self-sufficient India)," he said.

Hooda lamented that there has not been a single word of condolence from the government yet on 194 farmers who lost their life during the ongoing agitation.

Resuming the discussion, Manoj Kumar Jha of the Rashtriya Janata Dal said the government has lost the patience to hear and any criticism is painted as anti-national.

He noted that one has not seen such an aggressive approach even towards the neighbouring nations who came into Indian territory.

"Patriotism is not be worn on sleeves but carried in heart," he said making use of poetry and sarcasm.

Contesting the government's claim of having 11 rounds of dialogue with agitating farmers, he said its ministers 'believe in monologue and not dialogue'.

Digvijaya Singh of the Congress lashed out at the government, saying measures like demonetisation to the Citizenship Amendment Act were 'blunders that hit the people hard'.

He said the void between the Modi government's promises and implementation was big and it could not win the hearts of people.

He said the prime minister had 'lost their trust'.

"You have got majority but dissent is essence of democracy," Singh noted.

He said miscreants and anti-social elements were behind the events on Republic Day and all political parties have condemned their actions and agree that they need to be punished.

"But the farmers' issue should not be mixed with it, he said and added that the issue should be dealt with amicably."

However, Oil Minister Dharmendra Pradhan said the government is committed to farmers welfare and will help increase their incomes.

He said it will provide Rs 1 lakh crore additional income to farmers that will be generated by converting waste into energy.

The minister said the heap of waste at Ghazipur will also be cleaned soon to create energy.

Pradhan also said the government has come up with a scheme to procure ethanol worth Rs 20,000 crore which will help increase farmer's income.

He attacked the Congress for not bringing a law on MSP of crops despite being in power for long.

"You question those working honestly for farmers' welfare farmers," he said.

"The Opposition Congress cannot appreciate such government efforts as it has never done except for hailing its dynasty," he said.

"Those born with a golden spoon cannot digest when a tea-seller, son of a woman cleaning utensils in other houses for livelihood, takes reins of the government and that is why they talk against the government," he said, adding that 'the public is watching them'.

BJP member Jyotiraditya Scindia said the government has taken a host of steps in the last six years to increase their income.

Scindia attacked his former party Congress for changing its stand on the three legislations, saying that the Opposition party has favoured similar laws in its manifesto for the 2019 Lok Sabha election.

"Opposition parties will have to change their habit of going back on their words and wondered for how long they would continue to harm the interests of the country," he said.

Scindia said the opposition has insulted the President, the country and the democracy by boycotting the President's address.

Swapan Dasgupta (nominated) stressed on the need for upgrading in the farm sector.

"If we can rise above this basic partisanship and welcome the Centre in the states and states with each other, I think we can be looking forward not merely to a 11 per cent (GDP) growth but a growth which can be 15 per cent which can be envy of the whole world," he said.

Trinamool Congress MP Derek O'Brien pressed the government to repeal the three farm laws and offered a ''Repealing Bill 2021' drafted by him for the purpose.

He also demanded a proper inquiry into the death of a farmer during the tractor parade in Delhi on Republic Day.

He claimed the government had failed the migrant workers and also India's federal structure.

"They have failed the media. You can intimidate and threaten media barons but not the young media persons (on the ground)," he said.

He alleged that the current dispensation is just working for the benefit of some of the industrialists.

He criticised the move to put barricades, cement blocks, concertina wires and spikes at the farmer protest sites on Delhi's border points.

Banda Prakash of the Telangana Rashtra Samiti asked the government to complete the project promised to Telangana during the reorganisation of Andhra Pradesh.

Loktantrik Janata Dal (LJD) MP M V Shreyams Kumar on Thursday said the government has remained a mute spectator while democracy is being 'butchered' just a few kilometers away from the Rashtrapati Bhavan.

Lok Sabha proceedings were disrupted for the third consecutive day on Thursday due to protests by opposition members over the three new farms laws, but amid repeated adjournments the government managed to introduce a bill and the House took up the Zero Hour where various members raised issues related to their states and constituencies.

During the Question Hour, which takes place soon after the House convenes, Union minister Nitin Gadkari replied to a few questions related to the ministry of roads and highways.

But as opposition members continued with their protest by trooping into the Well of the House, the proceedings were adjourned.
Amid continuous uproar, Law Minister Ravi Shankar Prasad introduced a bill to amend the arbitration law to ensure that all stakeholders get an opportunity to seek unconditional stay on enforcement of arbitral awards where the agreement or contract is 'induced by fraud or corruption'.

Lok Sabha meets from 4 pm to 8 pm and at the fag end of the day's proceedings, the House took up the Zero Hour for 30 minutes where members raised issues related to their states and constituencies.

When Lok Sabha assembled at 4 pm, members of the Opposition started shouting slogans against the government and the agri laws.

Gadkari gave oral replies to a few questions related to his ministry.

But as sloganeering continued, Lok Sabha Speaker Om Birla asked members to return to their seats.

"Question Hour is the right of MPs...This behaviour is not good and I again request you all to return to your seats so that the House proceedings run properly," he said.

Shouting slogans and showing placards are against parliamentary tradition, he added.

But Opposition members refused to relent, forcing Birla to adjourn the House till 5 pm after about 20 minutes of proceedings.

When the House re-convened at 5 pm, members of the Opposition again started raising slogans.

Some ministers and members laid papers on the table of the House, and Law Minister Ravi Shankar Prasad introduced the Arbitration and Conciliation Amendment Bill, 2021.

Meenakshi Lekhi, who was in the Chair, asked the members to return to their seats, but they continued with their protests. Soon, she adjourned the House till 6 pm after about 15 minutes of proceedings.

When the House reassembled at 6 pm, the Opposition continued its protests shouting slogans and showing placards.

Rajendra Agrawal, who was in the Chair, appealed to the members to go back to their seats so that the House can function normally.

"You have every right to raise any issue that you would like to. Please exercise this right. Please go to your seats, please don't show the placards. You can raise your issues through the discussion on the motion thanking the President for his address," he said.

However, the opposition ignored his pleas and continued the protests, forcing Agrawal to adjourn the House till 7 pm after just 10 minutes of proceedings.

As the House assembled after the third adjournment at 7 pm, the opposition members again shouted slogans against the agri laws.

Agrawal again appealed to the members to go back to their seats so that the House can function normally.

However, the House was adjourned for the fourth time till 8:30 pm as members did not yield to the request of the Chair.

At 8.30 pm, the Zero Hour was taken up as opposition members kept raising slogans.