You have turned pen into broom: PM lauds media's role in 'Swachh Bharat'

Reaching out to media, Prime Minister Narendra Modi on Saturday lauded its role in spreading awareness about his pet 'Clean India' campaign, saying it has helped remove the perception that government is responsible for everything.

At his first interaction with the media in Delhi after becoming the Prime Minister and in many years, he recalled his fond relations with the media when he was a BJP office-bearer before going to Gujarat as Chief Minister in 2001. 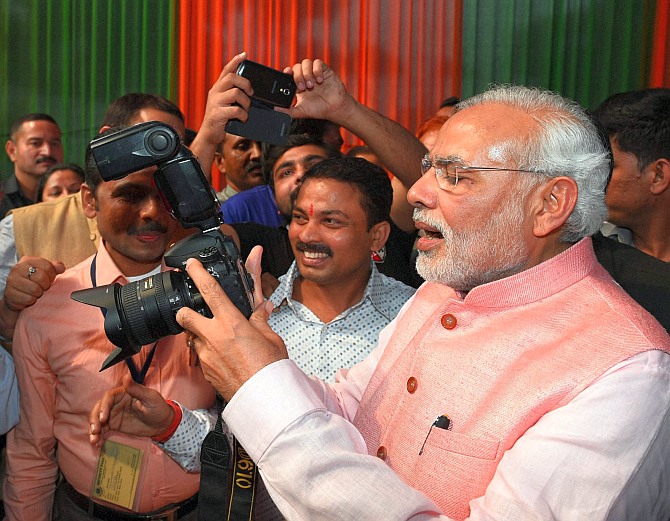 "I used to arrange chairs here (BJP office) waiting for you (media). Those were different days when we used to interact freely. I had a beautiful relationship with you and it helped me in Gujarat," he told the assembled editors, reporters and other journalists at the Diwali milan (get-together) hosted by BJP President Amit Shah at the party headquarters.

Fondly recalling the deep relationship he had with the media, Modi said he was looking for ways to further deepen and expand the old relationship.

"Some way will be found. It is important to interact with media directly rather than the reportage and articles. By interacting directly, one gets to know things which media persons cannot report. Not only does one get information but also vision, which is very valuable," he said.

Referring to 'Swachh Bharat' campaign launched by him, Modi said he was happy to see several articles, TV features and social media write-ups on the subject, giving the mission a wide publicity.

"Media has converted its pen into broom... This is a service to the nation," he said, saying he felt indebted by this.

He said although 80 percent of the media coverage is criticism of governments but this is an issue which affects the image of the country and impacts the poorest most.

"More important than health care is preventive health care and cleanliness plays a crucial role in this," he said, adding that it is a national duty to raise awareness about the issue.

Noting that all including influential people are getting involved in the 'Swachh Bharat' campaign, he said the notion that government has to do everything has changed.

"For the last 60 years, the thinking was that government has to do everything. Now the thinking is that we all have to work together. This demonstrates how big a role media can play," Modi said.

Media has inspired people to take part in cleanliness exercise, he said.

Earlier, Shah said the central government is doing a good job after people have reposed faith in Modi's leadership. He hoped that it will rise to the expectations of the people.

Modi later mingled with journalists many of whom jostled to get clicked with him. Several young journalists did selfies with the Prime Minister who happily obliged them.