You have money to topple state govts: Uddhav slams govt on Agnipath

In a veiled attack on the Eknath Shinde faction, Shiv Sena chief Uddhav Thackeray on Saturday said the party is not an object lying in the open which can be picked up by anyone who can stake claim over its legacy. 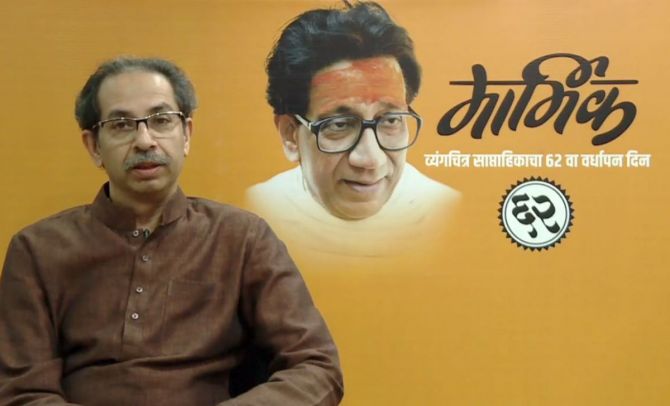 Speaking at the 62nd foundation day of Shiv Sena weekly Marmik, founded by Bal Thackeray in 1960, he said the Sena's foundations are "deep-rooted and strong".

"Some people think Shiv Sena is an object lying in the open which they can pick it up and take it away," said Thackeray, who had to resign as the chief minister in June when a sizable number of Sena MLAs rebelled with Shinde, who was sworn in as the CM on June 30 with the support of the Bharatiya Janata Party.

Shiv Sena's foundations are deep and strong and no one can stake claim over the party, he said.

Thackeray-led Shiv Sena is locked in a political tussle with the rebel Shinde camp which claims to be the "original" Shiv Sena of Bal Thackeray.

The Shinde faction has also staked a claim to the poll symbol of Shiv Sena -- a "bow and arrow"-- and the matter is pending before the Election Commission.

"The seeds of Shiv Sena were sown through Marmik as cartoons published in it gave voice to the restless minds 62 years ago. One can imagine what would have happened to Marathi people in Maharashtra and Hindus in India had Shiv Sena not been around," said Thackeray.

Marmik was launched by Bal Thackeray, then a political cartoonist, in 1960. It is seen as the launchpad for the Shiv Sena party, which came into existence in 1966.

Marmik had focused on issues of common Marathi people at that time including unemployment, the influx of north Indian migrants, and the retrenchment of Marathi workers among others.

"India is celebrating 75 years of Independence but going by the current situation one wonders whether we going back to the days of slavery?" Thackeray asked as he termed BJP president JP Nadda's remarks on regional parties as a "serious threat" to democracy".

Nadda had recently said in the times to come only an ideology-driven party like the BJP will survive, while others ruled by families will perish.

He alleged the Centre was planning to reduce recruitment in the armed forces.

"You have money to topple state governments but not for recruitment in the armed forces," he said apparently referring to the "Agnipath Scheme".

Thackeray also took a veiled dig at chief minister Shinde as the allocation of portfolios is yet to be done though the cabinet was expanded recently after a long wait.

"Today, people are roaming around and participating in their own felicitation programs without doing anything. Ministers are sitting idle without any responsibility," he said.

The Sena president urged cartoonists to publish cartoons from 1947 highlighting India's journey in the last 75 years.