Union minister Anurag Thakur, who has been under opposition fire over his alleged hate speech during Delhi assembly polls, on Sunday said strict action should be taken against those involved in the communal riots in the national capital which claimed over 40 lives. 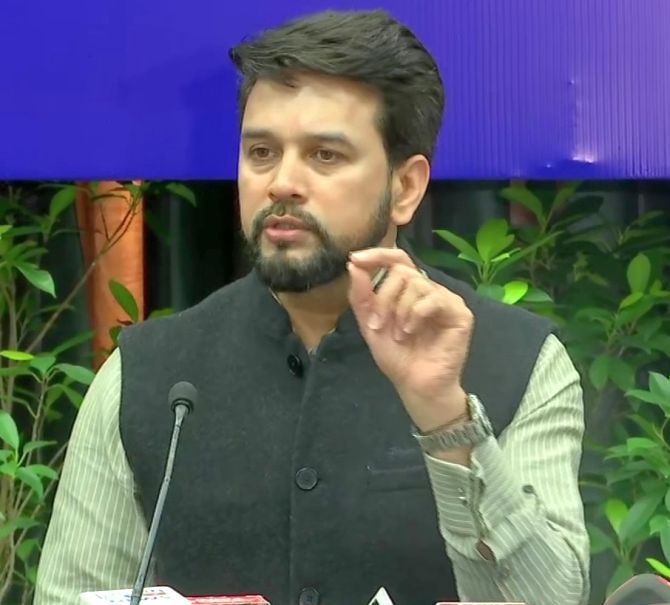 The minister of state for finance and corporate affairs was addressing a press conference in Chandigarh after meeting with stakeholders from various trades and industries during an interactive session organised by the Income Tax department.

At the press conference, he was asked to comment on the alleged hate speeches made by him and other Bharatiya Janata Party leaders in the run-up to the Delhi elections and how such vitriolic speeches led to the riots in the city.

"Strict action should be taken against those involved in (Delhi) the riots. The strength of our country is that people of various faiths coexist and live unitedly contributing towards nation building," Thakur said.

Further commenting on the communal riots, he said, "Police is doing its job...."

Asked again about his alleged hate speech, Thakur said, "I think sometimes there is lack of information in the media too regarding the way some things are projected."

Evading further response on the issue, the Union minister chose to talk about the country's economy.

"India should move forward. We have taken big steps on the economy and will do so in future too…,” he said.

Thakur added, "From Monday, parliament session will begin, questions are raised there also from economy to various other issues and on that platform (in parliament), answers will be given on various matters."

"If you have questions on the economy, you should ask those..," he said when media persons kept fielding questions about his alleged hate speech.

When journalists mentioned the wordings of the alleged hate speech, the BJP leader shot back, "You are lying. This is not what I said..."

Declining any further comment on the matter, the BJP leader said, "The matter is sub-judice. You (media) should have full facts (about his alleged hate speech). Half-baked information can be dangerous..”.

The Delhi high court had recently expressed "anguish" over the Delhi Police's failure to register FIRs against three BJP leaders over their alleged hate speeches in connection with the Citizenship Amendment Act-related violence and asked the police commissioner to take a "conscious decision" on it.

The Congress has said it will strongly raise the issue of the communal riots in Delhi during the second part of the budget session of parliament starting on Monday and demand Union home minister Amit Shah's resignation over alleged police lapses in curbing the violence.