Uttar Pradesh Chief Minister Yogi Adityanath on Thursday directed officials to speed up setting up of a commando training centre in Rampur and also form a skilled team of women commandos. 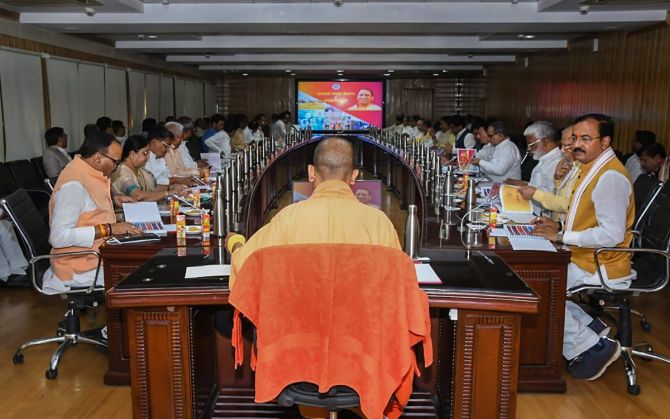 He further issued instructions to set up a unit of the Special Task Force in Ayodhya in the next 100 days.

The chief minister's directions came during presentations of various departments, including home, jails, home guards, secretariat administration, as well as appointment and personnel, before the council of ministers in Lucknow.

"Complete further action by selecting land for the commando training centre in Rampur. Like the men's team, a skilled team of women commandos should also be formed," the chief minister said.

Hailing women for doing a good job by joining the police service, the chief minister said a Scooty should be provided to every female beat constable.

The actionable points are part of Bharatiya Janata Party’s poll promises in the second term of the Adityanath government.

The BJP in its "sankalp patra" had promised to build anti-terrorist commando centres in Meerut, Rampur, Azamgarh, Kanpur and Bahraich to curb terrorist activities.

In order to strengthen law and order, a new women Provincial Armed Constabulary battalion each should be formed in Jalaun, Mirzapur and Balrampur districts, the CM said, asking officials to prepare a proposal in this regard.

New field units of the ATS are being formed in many districts, including Deoband, Bahraich, Aligarh, Kanpur and Bahraich. The availability of necessary human resources, buildings etc. should be ensured for the new units, Adityanath said.

To enhance skills in crime investigation, training of ATS teams in various institutions of India, besides foreign training with investigative and intelligence agencies like the Federal Bureau of Investigation and Homeland Security should also be done, Adityanath said.

There is a need for technological development in the field of anti-drone attack system and drone forensics. A UP ATS police station should also be established, the CM said.

Adityanath also asked his 18 cabinet ministers to go to the field, meet people and gather their feedback on governance at the grassroot level.

Under the chairmanship of cabinet ministers, 18 teams for 18 circles are being formed and a programme is being prepared for 18 weeks, he said.

These teams will stay for 72 hours in each division and also visit different districts, meet people and examine the system and possibilities, after which the nodal officers of all the 75 districts will take the report of these teams and submit the plan of implementation within 15 days, he said.

Claiming that in the past five years the state has presented a model of strong law and order and eradicated organised crime, the chief minister said illegally acquired assets worth Rs 2,081 crore have been confiscated during this period, and asserted that strong action against mafias and criminals should continue.

Alleging that previous governments had "mischievously" liquidated 54 companies of the PAC, the CM said his government revived them and also started new battalions.

Adityanath said the department of appointment and personnel has employed skilled youth with complete transparency in the past five years and stressed that along with recruitment, emphasis should also be on modernisation and training.

Adityanath emphasised that the secretariat should be kept free from touts.

He said thugs who promise jobs and work should be kept away from the secretariat premises and field officers should not be called unnecessarily to the secretariat.

The chief minister said efforts should be made to bring down the response time of UP 112 helpline number further to 10 minutes and a single window system for police, prosecution and organization should be implemented in a phased manner.

He also underlined the need for patrolling on foot to maintaining law and order and said this should continue every day.

He also asked officials to develop a portal where complete details of such patrolling is recorded.

The chief minister asked officials to develop tools with the help of IIT, Kanpur, for data analytics and also incorporate video analytics and management technology into CCTV, which he said, will increase its effectiveness.

Energetic, skilled and dedicated personnel should be selected in the next 100 days for the new team of Special Police Operation Team (SPOT) and they should be trained in collaboration with the Central Police Force or  the Indian Army, Adityanath said, adding that sniper training should also be given to them.

Special adventure courses should also be conducted to increase their confidence, the CM said.

In order to further strengthen the system of investigation, the UP Special Police Establishment Act should be prepared on the lines of the Central Bureau of Investigation, he said, and asked officials to work in this direction within 100 days.

A project management group should be appointed for the installation of CCTV and 3,000 pink booths in public places.

Pink booths should also be made near religious places, he said. 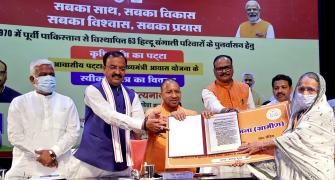 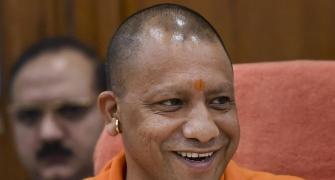 UP cancels policemen's leave till May 4 over festivals 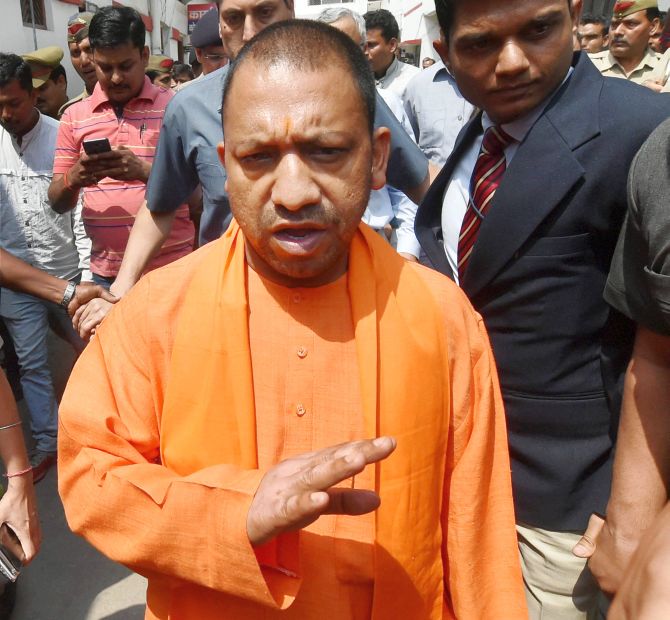 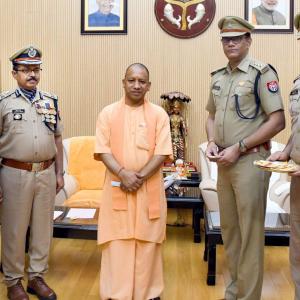 No religious procession in UP without govt nod: Yogi