News
Business
Movies
Sports
Cricket
Get Ahead
Money Tips
Shopping
Sign in  |  Create a Rediffmail account
Rediff.com  » News » Adityanath set to be 1st UP CM from BJP to finish 3 yrs in office

Come March 19, Uttar Pradesh Chief Minister Yogi Adityanath will set a record of being the first chief minister from the Bharatiya Janata Party to complete three straight years in office in the state. Adityanath, 47, was sworn in as the 21st chief minister of Uttar Pradesh. He assumed office on March 19, 2017, says the official website of the Uttar Pradesh Legislative Assembly.

He is the fourth chief minister from the saffron party to head the northern state.

Before Adityanath, Kalyan Singh, Ram Prakash Gupta and Rajnath Singh of the BJP had served as Uttar Pradesh chief ministers.

"Yogi Adityanath is from a humble background. He does not belong to the category of 'viraasat ki siaasat' (politics of inheritance). He achieved this position through sheer hardwork," UP BJP media coordinator Rakesh Tripathi said.

"Everyone has seen his spirit of waging a war against Japanese Encephalitis in Gorakhpur, and today he has waged a similar war against various illnesses of Uttar Pradesh -- be it crime or corruption. He is
credited for the successful organisation of Kumbh in Prayagraj, Pravasi Bharatiya Diwas, Investor Summit and the recently concluded Defence Expo," he said.

The opposition Congress, however, pooh-poohed the three-year rule of the priest-turned-politician.

"It has been three years of blatant lies. Farmers and youths of the state have been duped. 'Jungle raaj' is prevailing in Uttar Pradesh. There is no let-up in crime against women in the state," UP Congress
spokesperson Ashok Singh said.

In the 2017 UP assembly elections, the BJP won 312 of the 403 seats, while Apna Dal (Sonelal) got nine seats and Suheldev Bharatiya Samaj Party won four seats.

Almost a year before the 2019 Lok Sabha election, the BJP suffered shock defeats in the bypolls.

Not taking the defeat to his heart, Adityanath chose to learn from the "mistakes".

He had said the bypoll loss was a "lesson to the BJP" and cited "over-confidence" and the "inability to gauge the understanding between Samajwadi Party and Bahujan Samaj Party" as prime reasons behind the party's defeat.

"When the election candidates were declared, the SP, BSP and Congress were not together... they had not joined hands then. But suddenly in the middle of the election, the SP and the BSP forged an electoral understanding," he had told the media at his residence.

"The over-confidence and inability to gauge the electoral understanding between the SP and BSP led to the defeat," he had said.The tables turned in 2019 and the BJP won Kairana, Gorakhpur and Phulpur seats in the Lok Sabha elections that year.

The BJP bagged 62 out of 80 Lok Sabha seats in the state in 2019, while its ally Apna Dal (Sonelal) got two seats. The Bahujan Samaj Party (BSP) bagged 10 seats followed by Samajwadi Party (SP), which won five seats. Congress won one seat.

Bahujan Samaj Party supremo Mayawati was the chief minister of Uttar Pradesh on four occasions. Her longest tenure was from May 13, 2007 to March 15, 2012.

Samajwadi Party president Akhilesh Yadav assumed the office of UP chief minister on March 15, 2012, and held it till March 19, 2017.

Among the Congress stalwarts who held the office for significantly long time were Pandit Govind Ballabh Pant (the first chief minister of UP) and Sampoornananda. 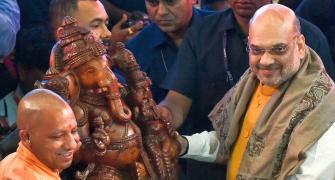 Shah reveals reason behind Yogi's elevation to UP CM