Yediyurappa sworn in as Karnataka CM for 4th time

Karnataka Bharatiya Janata Party stalwart B S Yediyurappa was sworn in as Chief Minister of the state for a fourth time on Friday in a sudden twist to the protracted high voltage political drama in the state with a big challenge to manage numbers staring him in the face. 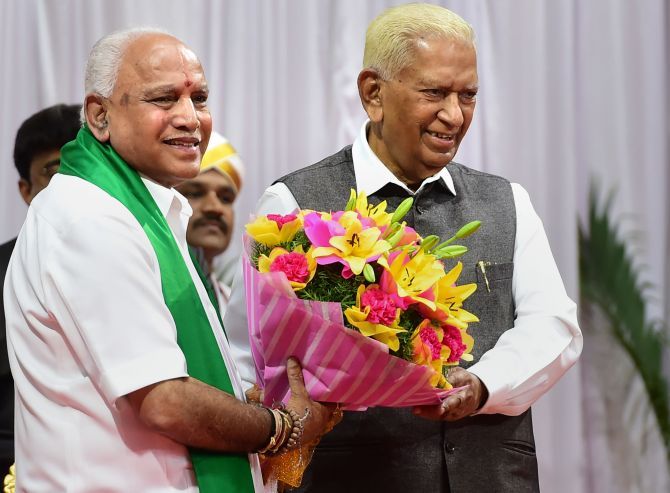 Shortly after taking the oath, Yediyurappa said he would move a motion of confidence in the assembly on July 29 to prove his majority, apparently confident of winning it with the expectation that 16 rebel Congress and Janata Dal-Secular MLAs may abstain as they did on Tuesday last, giving him the edge.

Yediyurappa alone took the oath succeeding H D Kumaraswamy three days after the Congress-JD(S) coalition government crumbled under the weight of a rebellion by a big chunk of its lawmakers, 20 of whom were absent for the voting that led to the defeat of its trust vote by 99-105.

Of the 20, three have been disqualified by the Assembly Speaker Thursday while the lone Bahujan Samaj Party MLA's stand is not clear.

Governor Vajubhai Vala administered the oath of office and secrecy to the 76-year old Yediyurappa, credited with leading the BJP to its first ever government in the south in 2008, at a brief function in the Raj Bhavan, which was boycotted by JD-S and Congress leaders.

The Lingayat strongman's move to stake claim for the government formation came as a sudden development on Friday morning, a day after assembly Speaker K R Ramesh Kumar
disqualified three rebel Congress MLAs, heightening suspense over a new dispensation being in place. 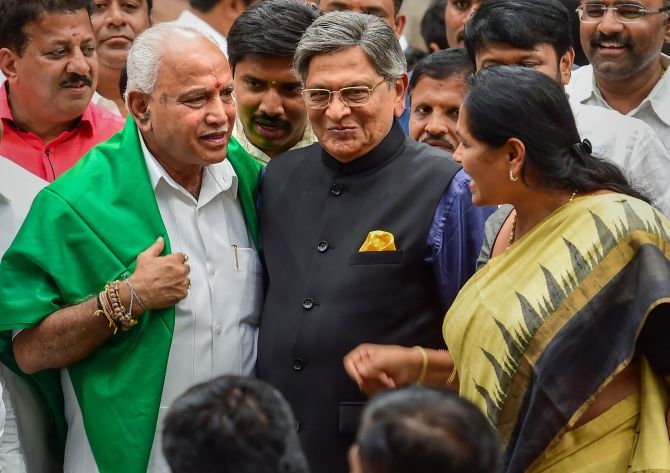 Speaking about the sudden turn of events on government formation, Yediyurappa told BJP workers before the swearing in that party national president and Home Minister Amit Shah spoke over phone to him in the morning and asked him to prepare for the oath on Friday.

The BJP veteran, who changed the spelling of his name from Yeddyurappa to Yediyurappa with the move becoming public Friday, is making it to mantle of chief ministership 14 months after he demitted the coveted office being unable to prove the majority in the state assembly.

His swearing in came after weeks of murky political drama and legal battle triggered by the resignation of 15 rebel Congress and JDS MLAs that led to the fall of the coalition government on Tuesday.

In 2018, he survived barely for three days before stepping down as chief minister in May as he was unable to shore up numbers to get the majority despite the BJP having
emerged as the single largest party in the 2018 assembly polls that threw up a hung verdict, leading to the Congress-JD(S) rule. 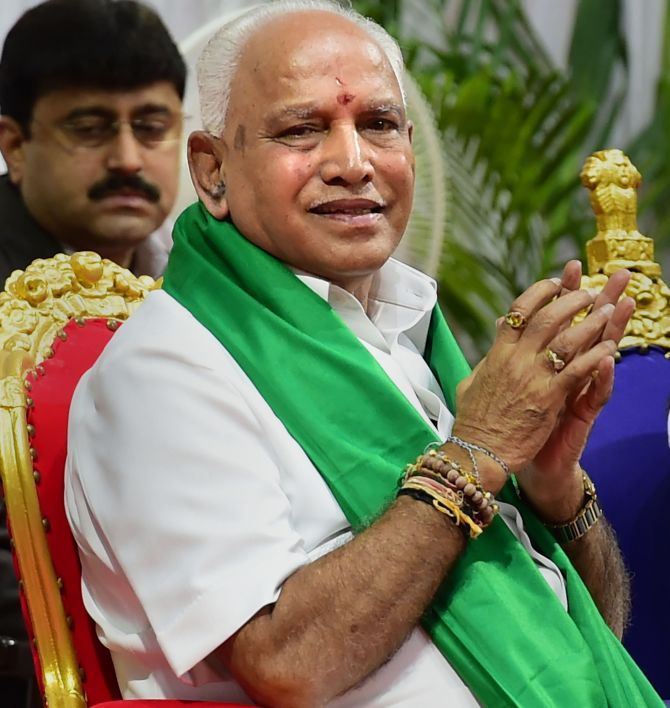 In Delhi, BJP Working President J P Nadda dismissed opposition's claim that his party engineered defections to bring down the coalition government and said it fell due to its internal reasons and asserted the saffron party will provide a stable regime.

On Yediyurappa being over the 75-year age bar the party has stipulated for its leaders holding any government position, Nadda said the Karnataka veteran was the leader of the BJP Legislature Party in the state and was natural for him to be the party's choice for the chief minister's post.

Replying to questions from reporters, he said, "It depends... you see, first of all he is a leader, he is an elected leader of the legislature party. Accordingly, he is taking oath. It is a continuous process and the party takes note of ongoing developments from time to time."

Yediyurappa became the chief minister for the first time in November 2007 but his term in office lasted just seven days as Kumaraswamy reneged on a power sharing arrangement and walked out of the JD(S)-BJP alliance then.

He assumed the high office very next year after the BJP came to power on its own but had to step down in July, 2011 following his indictment by the then Lokayukta N Santosh Hegde in an illegal mining case.

Speaking to reporters after the swearing in, Yediyurappa said, "The Karnataka assembly session will be called on July 29, Monday at 10 am for moving confidence motion and for the passage of the Finance Bill."

Speaker Ramesh Kumar had said on Thursday that if the Finance Bill was not passed by July 31, the 'government will come to a standstill and we will not be in a position to even
pay salaries'. 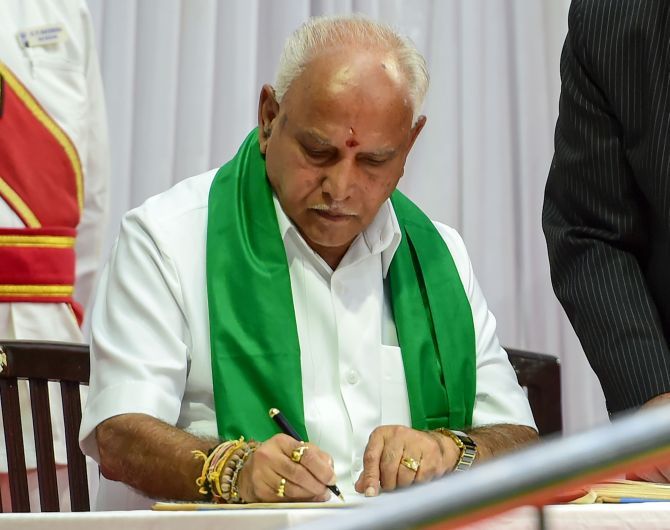 Friday's drama unfolded when Yeddyurappa made a sudden announcement in the morning that he would meet the Governor to stake claim to form the government Friday itself and rushed to the Raj Bhavan.

Soon thereafter, he emerged out of the meeting with Vala with a letter from the governor inviting him to form the government.

"I have requested Governor to administer me oath between 6-6.15 pm as the Chief Minister. The Governor has agreed and given me a letter," Yediyurappa told reporters.

The BJP leader also said as he is already Leader of the Opposition, there is no need to call a Legislature Party meeting to elect him the leader of the party in the assembly.

Proving majority in the assembly, winning by-elections to seats vacated by the resignation of rebel Congress-JD(S) MLAs or their possible disqualification, and ministry formation will pose tough challenges for Yediyurappa, senior BJP leaders said.

Yediyurappa has to play a balancing act by ensuring that those within the party are not sidelined, while also accommodating the rebel Congress-JD(S) legislators, they added.

After the disqualification of three rebel Congress MLAs, the current strength of the 225-member assembly excluding the Speaker is 221 and the half-way mark 111.

Present party position is BJP along with one independent 106, Congress 76 (including MLAs decision on whose resignations and disqualification plea is pending), JD-S 37 (including resigned and pending disqualification), one BSP, one Nominated and the Speaker, who has a casting vote in case of a tie.

The Speaker is yet to decide on the resignations of 14 MLAs and disqualification petitions against them, three of whom are from JD-S and the rest from the Congress. He had on Thursday disqualified three rebel Congress MLAs.

As political uncertainty continued to hover over the state even after the fall of the JD(S)-Congress ministry, BJP leadership was awaiting "instructions" from party's central leadership to stake the claim for forming the government, which finally came on Friday.

In his letter to the Governor staking claim, Yediyurappa noted at present the BJP's strength is 105 and it was the single largest party in the assembly.

"Therefore, I request your Excellency, I may be invited to form alternate government today itself and I will take oath as chief minister of Karnataka at Raj Bhavan between 6 pm to
15 pm," the letter said.

BJP president Amit Shah congratulated Yediyurappa after he took oath as chief minister and expressed confidence the party will run a stable, pro-farmer and development-oriented government under him.

'Congrats to BS Yediyurappa, newly sworn in CM of Karnataka. I am sure under his leadership and under the guidance of PM Modi, BJP will give a stable, pro-farmer and development oriented govt in the state. I assure people of Karnataka that BJP is committed to fulfil their aspirations,' Shah, also the Union home minister, tweeted.

The Congress slammed the move for government formation, saying that since the BJP did not have the numerical strength, it could not stake claim nor take the oath for any reason.

'In what article of the Constitution is the governor allowed to permit the party to form govt that doesn't have majority? It is shame!!' he tweeted.

The JD-S dubbed the Governor's decision to permit the BJP leader to take oath without raising any questions on the numbers was 'anti-democractic'.

Ahead of taking the oath as Karnataka chief minister, Yediyurappa asserted there would be no politics of vengeance in his rule and he would take the Opposition along.