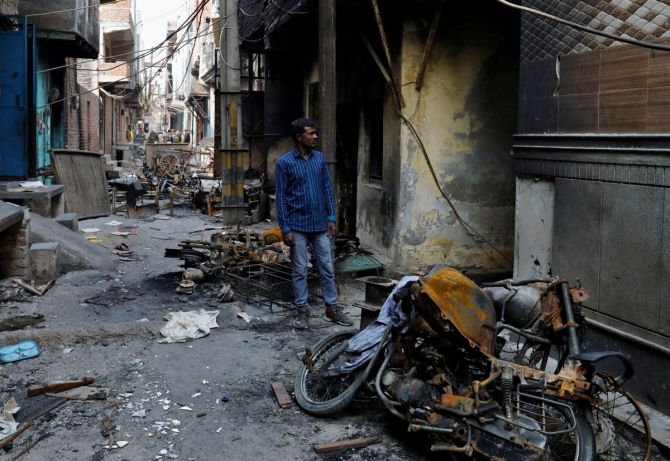 IMAGE: A man looks at burnt out properties owned by Muslims in a riot affected area following clashes between people demonstrating for and against a new citizenship law in New Delhi, on March 2, 2020. Photograph: Danish Siddiqui/Reuters

They have been accused of asking anti-Citizenship Amendment Act protesters to go to 'any extreme', spreading discontent in the community by calling CAA/National Register of Citizens anti-Muslim, and organise demonstrations to 'malign the image of the Government of India'.

The names appeared in a supplementary charge sheet, a copy of which is with the PTI, filed by the police on the riots in North East District between February 23 and 26, which claimed 53 lives and left 581 injured, 97 of them having gunshot wounds.

These eminent personalities have been made accused based on the confessions of three students -- women's collective Pinjra Tod members and JNU students Devangana Kalita and Natasha Narwal, and Gulfisha Fathima of Jamia Milia Islamia -- in the Jafrabad violence, from where the riots spread to other parts of north-east Delhi.

All three are facing charges under various sections of the Unlawful Activities (Prevention) Act.

In the charge sheet, which was made public just two days before the commencement of the Monsoon Session of Parliament, the Delhi Police has claimed that Kalita and Narwal admitted to not just their complicity in the riots but also named Ghosh, Apoorvanand and Roy as their mentors, who allegedly asked them to carry out the protests against the Citizenship Amendment Act and go to 'any extreme'.

Their similarly-worded disclosure statements -- mentioned in the charge sheet -- claim the two Jawaharlal Nehru University students said they organised the Daryaganj protest in December and the Jafrafad chakka jam (road block) against the CAA on February 22, 2020 at the behest of Ghosh, Apoorvanand and Roy.

The student-activists also told the police the three coordinated with the Islamist group Popular Front of India (PFI) and the Jamia Coordination Committee to mentor the Pinjra Tod members to carry forward their campaign against the CAA, according to the charge sheet.

The police have used Jamia student Fathima's statement to corroborate the ensuing events.

The charge sheet claims that apart from Yechury and Yogendra Yadav, Fathima's statement mentions Bhim Army chief Chandrasekhar, United Against Hate activist Umar Khalid and some leaders from the Muslim community such as ex-MLA Mateen Ahmed, and MLA Amannatullah Khan.

The document claims they aided the conspirators of the violence.

In her statement, Fathima said that she was told to organise the protest to 'malign the image of the Government of India', the police claimed.

In her statement, included in the charge sheet, she says that 'big leaders and lawyers started coming in to provoke and mobilise this crowd, including Omar Khalid, Chandrashekhar Ravan, Yogendar Yadav, Sitaram Yechury, and lawyer Mahmood Pracha, etc'.

'Pracha said that the sitting in demonstration is your democratic right and the rest of the leaders filled the feeling of discontent in the community by calling CAA/NRC anti-Muslim,' she said, according to the charge sheet.

According to the charge sheet, Kalita added, 'Umar Khalid had also given some tips for doing protest against CAA/NRC. On the directions of these persons, Umar Khalid's United Against Hate Group and JCC (Jamia Coordination Committee) & members of our Pinjda Tod (we) together started protest in difierent parts of Delhi.'