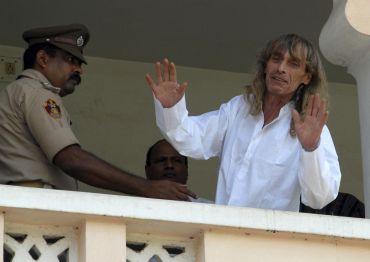 Hitherto considered as the unchallenged leader of ruling Biju Janata Dal, Chief Minister Naveen Patnaik was jolted by a whiff of revolt in 2012, as the year also witnessed a spate of abductions in Odisha with Maoists using them as a new weapon to clinch their demands.

Rocked by scams in many areas including iron ore and coal mining, the year was also marked by sluggish industrial activity, shut-down of units and a neglected farm sector amid charges of distress sale of paddy by farmers.

The tranquil in politics was stirred after many years as Patnaik, enjoying his third consecutive term as chief minister even without facing a whisper of dissent from anyone in BJD, was shaken by an alleged aborted coup bid against his government on May 29 when he was away on a foreign visit.

Seeking to nip in the bud any dissidence, the BJD supremo sacked some ministers and suspended some others from the party including MP Pyarimohan Mohapatra, considered the chief strategist of Patnaik in politics as well as governance for over 12 years, on charge of engineering a coup.

Bureaucrat-turned-politician Mohapatra, who denied any coup bid and claimed that the gathering at his place was to strengthen inner democracy in BJD, later formed Odisha Jana Morcha describing it as a platform within the ruling party aimed at reforming and democratising the organisation.

BJD politics apart, the year saw resurgence in main Opposition Congress, which remained virtually dormant for years, with a massive rally in the state capital in September highlighting alleged misrule and corruption by Naveen Patnaik regime. It was followed by a series of rallies elsewhere as part of efforts to rejuvenate the party ebfore the 2014 polls.

The Bharatiya Janata Party, which remained marginalised ever since BJD severed ties with it, was hit by infighting as the race for state unit chief hotted up.

In a calculated move, the red rebels kidnapped Italians Paolo Bosusco and Claudio Colangelo while the two were trekking in the picturesque Daringbadi area of tribal-dominated Kandhamal district in March.

As the twin abductions exposed fragility in security preparedness to deal with ultras, the incidents followed high drama involving hard bargaining by Maoist-selected mediators to secure the release of the hostages in phases.

While Colangelo was set free after spending about 11 days in captivity, Bosusco was released after prolonged negotiations on April 12.

However, 37-year-old tribal MLA Hikaka had to languish for over a month in the captivity of Maoists before he was freed on April 27 as his captors were not keen to join any talks and used release of letters and audio tapes through the media to place their demands before the government.

Notwithstanding Patnaik's claim about a "progressive improvement" in Naxal situation, a vast stretch of red corridor in Odisha turned a safe sanctuary for Maoists on the run from Chhattisgarh, Jharkhand and Andhra Pradesh.

Though DGP Prakash Mishra claimed major successes against Naxals saying eight of the 17 Maoist-affected districts are now free from the menace, violence by the red rebels continued unabated.

What brought some solace to the police was the ouster of top rebel leader Sabyasachi Panda from CPI (Maoist). As a marginalised Panda formed his own group in Odisha, security forces mounted pressure on him to surrender.

The ultras often attacked government buildings, mobile towers and people besides targeting security personnel and triggering landmine blasts at will.

It was scams galore during the year. The multi-crore mining scam continued to rock the state throughout the year with Opposition parties slamming the government for plunder of precious mineral resources from Odisha.

While a team of Justice M B Shah Commission appointed by the Centre to probe illegal mining activities in different states visited Odisha twice in October and November, there was vociferous demand by Opposition parties for a CBI inquiry into alleged irregularities.

The commission, which also visited Odisha earlier in December 2011, verified 160 iron ore and manganese mine leases out of its target of 192 cases. The rest 32 cases involved exclusive manganese mines, sources said.

In the coal sector, Patnaik came under direct attack for recommending allocation of a coal block to a big private steel company after cancelling the same given to another firm. He also drew flak for a joint venture between state-owned Odisha

Mining Corporation and a Delhi-based firm for coal mining in Angul district in which controlling stake was given to the private player. CBI launched a probe into the matter.

A novel campaign against alleged water scandal was intensified by NGOs and activists accusing the government of providing water from major rivers to industries liberally at the cost of irrigation and thus hitting the farmers hard.

On industrialisation front, progress remained tardy and sluggish despite the state's claim about attracting lakhs of crores of rupees investments as mega projects like Posco, ArcelotMittal and Vedanta failed to make headway due to varied reasons including resistance from people.

Vedanta Aluminium Ltd had to shut down its Alumina refinery plant at Lanjigarh in Kalahandi district on December 5 due to non-availability of bauxite after running the unit for about five years by arranging raw material from other states like Gujarat and Chhattisgarh at high cost.

Despite several hurdles in setting up industries, Odisha government claimed to have achieved steel production capacity of 12.66 mtpa in the state.

Of the 49 companies which signed MoUs with the state government for establishment of integrated steel plants, 30 companies have gone to different stages of production, according to Steel and Mines Minister R K Singh.

The state government is also optimistic that Odisha will generate at least 77.16 mtpa of steel after commissioning of all the 49 MoU signed companies.

Agriculture presented a pathetic scene amid allegation of a major scam in distribution of seeds. Opposition parties also alleged distress sale of paddy by farmers in many areas due to failure on the part of the government to open "Mandis" in time for procurement.

The issue relating plight of farmers dominated the proceedings in the state assembly during winter session with members cutting across party lines demanding opening of adequate number of 'mandis' in the state to facilitate peasants to sale their produce at the proper price.

As the year was drawing to a close, unseasonal rains and hailstorm lashed four coastal districts of Balasore, Kendrapara, Jajpur and Jagatsinghpur on December 12 claiming the lives of at least eight people besides causing substantial loss to paddy crop.

Image: Freed Italian tour guide Paolo Bosusco, who was taken hostage by Maoist rebels, waves from a balcony of a guest house in Bhubaneswar in April, 2012