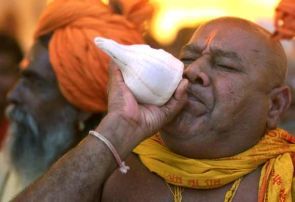 The Samajwadi Party on Thursday justified the Uttar Pradesh government’s decision to ban a proposed yatra by the Vishwa Hindu Parishad to garner support for the construction of the RamTemple at a disputed site in Ayodhya.

“We won’t let Uttar Pradesh to become Gujarat. There is brotherhood and communal harmony here. Chief Minister Akhilesh Yadav has made it clear that anything against the law will not be tolerated,” he said.

“Be it RSS, VHP or even BJP, if they use sadhus and sants for political purposes…the people of Uttar Pradesh are well aware of their motives and conspiracies. Sadhu and sants should be peace loving and not take law in their hands. Why didn’t they take out a yatra during BJP rule? We believe in secularism,” he added.

“We want communal harmony and we want development but there are some people who consider communalism as politics, they are least bothered about development. Communalism cannot grow in Samajwadi Party’s rule,” he added.

The UP government on August 20 banned the VHP from holding a religious procession to Ayodhya, as a preemptive measure against communal flare-up. According to reports, devotees from several parts of the country are expected to arrive in large numbers at Ayodhya, from August 25 to September 13, as part of VHP’s proposed yatra of seers and saints, called the ‘84 Kosi Parikrama’.

The VHP plans to start from Ayodhya and travel through six districts -- Basti, Faizabad, Ambedkarnagar, Barabanki, Bahraich and Gonda, before returning to Ayodhya on September 13. The UP government has said the administration of all six districts have advised against allowing the yatra.