A day after the city saw huge crowds of mid-night revellers thronging the eastern metropolis's busy Park Street to celebrate Christmas, health experts and doctors cautioned the state government against allowing more such gatherings especially during the New Year festivities, pointing to the rising number of Covid cases in the country and emergent threat from a more virulent Omicron strain. Experts pointed out that the state authorities which had earned kudos for managing crowds during Durga Puja two months back, should not have relaxed their guard during the Christmas festival which is also a popular festive occasion given the fact that people are suffering from "Covid fatigue" and were likely to dispel with safety norms.

Virologists and public health experts felt an urgent clampdown is needed to avoid a repeat of such mass gatherings with Covid inappropriate behaviour during the New Year celebrations.

"It seems the administration failed last night. There has to be a strict approach given that there are expectations of a surge in COVID cases especially with the advent of the Omicron variant. We expected the government as well as common people to be more responsible," Dr Sanjib Bandyopadhyay, Associate Professor of Burdwan Medical College, who has been handling COVID cases told PTI.

Such revelry, throwing Covid safety protocols to the winds, would give a big push to the number of daily Covid-19 infections, he believed. India reported some 6,987 fresh Covid cases on Saturday with West Bengal accounting for 552 cases.

"The government must should have adopted a stricter attitude. The Delhi state government has successfully done so, we could have easily replicated that," Dr Halder said.

The state government has relaxed night curfew restrictions for nine days during the Christmas and New Year festive season. Not only did large crowds surge through the central business district of Park Street, most clubs and hotels had full houses during Christmas lunches and evening entertainments.

Observers said the state government's move to relax curfew norms which had forbidden travel after 11 pm was 'good for business' but 'bad for public health' as the number of gatherings were bound to go up given the fact that people living through two years of strictly enforced Covid norms were suffering from "Covid fatigue" and wished to socialise again.

"The euphoria witnessed at Park Street by gathering of crowd during Christmas night can have far flung repercussion. We all know gatherings with COVID-19 inappropriate behavior causes surge of cases," Dr Subhrojyoti Bhowmick MD (Pharmacology) of Peerless Hospital said.

One of Kolkata's top rheumatologist Dr Syamasis Bandyopadhyay, however, blamed people who seemed to believe the danger from the pandemic has ended.

"Celebration should be coupled with wisdom ... You cannot expect everything from the government. If such a large number of people start gathering what can the police administration do? You cannot lathi-charge such a huge crowd during a festival," Dr Bandyopadhyay told PTI.

The West Bengal government has relaxed the movement of people and vehicles between 11pm to 5am for nine days from December 24, 2021 to January 1, 2022.

The night restrictions and other COVID measures, however, have been extended till January 15, 2022. 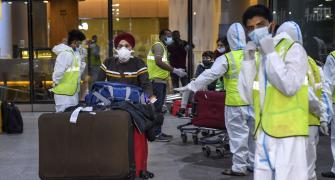 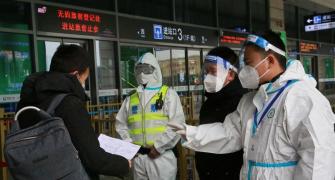 World seeing 4th Covid surge, we must be alert: Govt Maha to impose fresh curbs in view of Covid spike