Tens of thousands of people on Sunday braved heavy rains to bid a teary adieu to Singapore's founding leader Lee Kuan Yew in a grand funeral attended by many world leaders, including Prime Minister Narendra Modi who described him as one of the ‘tallest leaders of our times’.

Lee, 91, the city-state's prime minister for 31 years and widely respected as the architect of Singapore's prosperity, died of severe pneumonia on March 23. 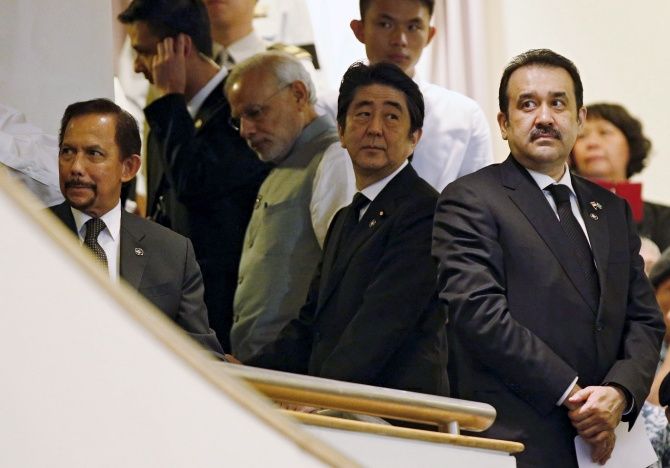 Global dignitaries, including monarchs, presidents, prime ministers and former leaders, joined hundreds of thousands of Singaporeans in a state funeral service which was telecast live and streamed on various social media.

Prime Minister Modi arrived in Singapore on Sunday morning and attended the service. 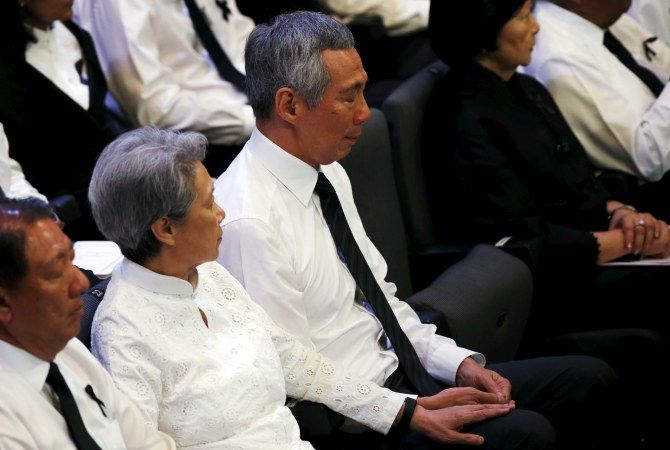 Singapore's Prime Minister Lee Hsien Loong is comforted by his wife Ho Ching after delivering his eulogy for his father and former leader Lee Kuan Yew at the University Cultural Centre at the National University of Singapore. Photograph: Edgar Su/Reuters

Defence sirens were blown throughout Singapore's housing estates for a minute of silence to pay respects as the last post was played on by a military bugler.

Earlier, Singaporeans lined up amid heavy downpour along a 15.4 km route on which Lee's coffin, draped in red-and-white Singapore flag and protected from the downpour by a glass casing, made a journey from parliament house to the UniversityCulturalCenter at the National University of Singapore, where the service was held. 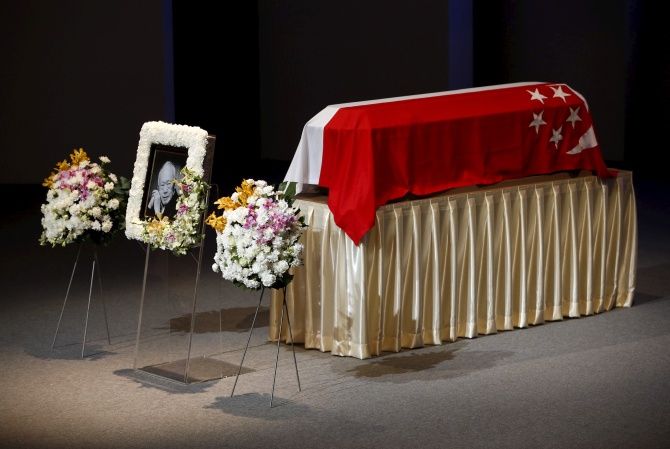 Lights are dimmed as attendees stand for a moment of silence for former leader Lee Kuan Yew at the University Cultural Centre at the National University of Singapore. Photograph: Edgar Su/Reuters

Lee's body had been lying in state at the parliament for the public to pay respects to the leader. More than 450,000 people had paid their last respects to Lee during the week.

The Singapore armed forces, which was established by Lee, gave the highest honour to the leader with a 21-gun salute, a fly-past by the air force planes and sail-past by naval boats.

A 21-gun salute is normally reserved for sitting heads of state but an exception was made for Lee. Lee's son Prime Minister Lee Hsien Loong led the eulogies read out at the service, giving an emotional tribute to his father. Prime Minister Lee said his father had ‘lived and breathed Singapore all his life’.

"The light that has guided us all these years has been extinguished," he said.

Soon after his arrival, Prime Minister Modi lauded Lee as a ‘global thinker’ and said India deeply valued his friendship and his support for its economic progress.

Lee is widely credited with transforming Singapore from an impoverished third-world nation into an advanced first-world economy within just a generation.

Lee is credited with shaping the city-state's present status as a global financial and commercial hub. He became Singapore's first prime minister in 1959, when the island gained self-rule from Britain, and ruled with an iron fist for 31 years. Singapore became a republic in 1965 after a brief and stormy union with Malaysia.

Lee stepped down in 1990 in favour of his deputy Goh Chok Tong, who in turn was succeeded by Lee's son. Noting that Singapore's transformation in one generation is a tribute to Lee's leadership, Modi said his death marks the end of an era.

"He inspired not just Southeast Asia, but all of Asia, to believe in its own destiny," he said. 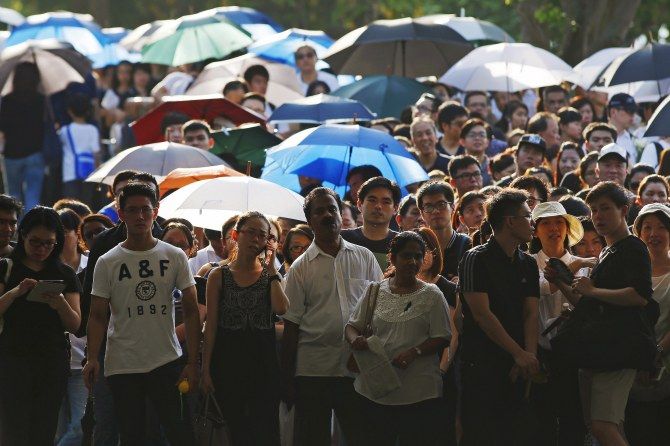 People queue up to pay their respects to the late first prime minister Lee Kuan Yew at the Padang grounds outside the parliament house in Singapore. Photograph: Edgar Su/Reuters

"In the 50th anniversary year of Singapore's independence, I am sure that he (Lee) left satisfied with Singapore's achievements and confident about its future."

Modi underlined India's relations with Singapore, saying it ‘is one of our strongest relationships’ in the world.

"India's integration with Southeast Asia and beyond is growing. Singapore is a key pillar of India's Act East Policy," the prime minister said. "Personally, he was a source of inspiration for me. His achievements and thoughts give me confidence in the possibility of India's own transformation," Modi said. 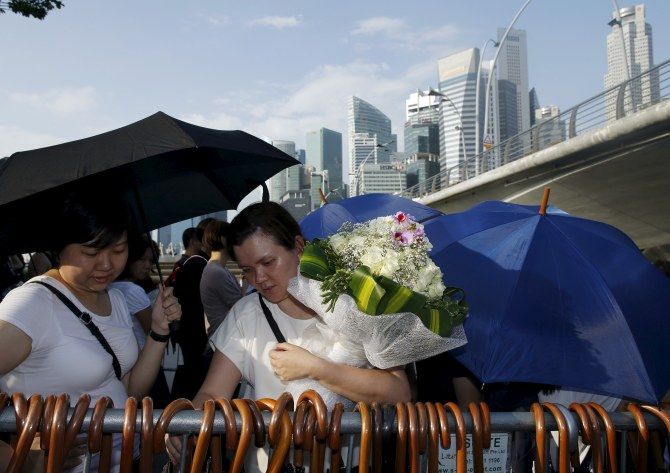 People pick up free umbrellas as they queue up to pay their respects to the late first prime minister Lee Kuan Yew at the Padang grounds outside the parliament house in Singapore. Photograph: Edgar Su/Reuters

They paid rich tributes to the leader who transformed Singapore from a third world country to an economic powerhouse. Recalling how his father had spent long-hours working for Singapore over the years, Prime Minister Lee said, "We have all lost a father. We have grieved as one people, one nation." 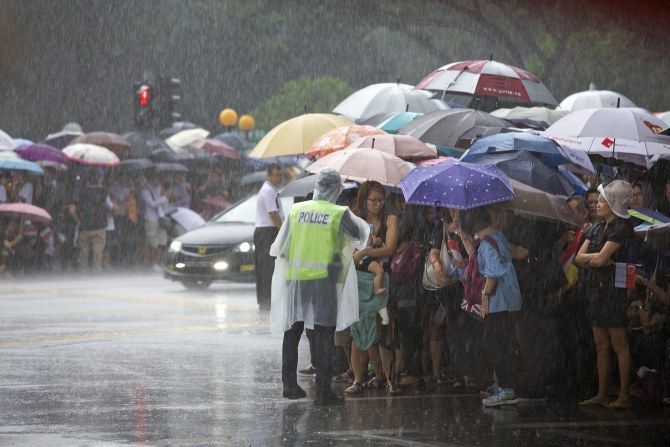 A policemen tries to move a crowd of Singaporeans waiting in the rain for the coffin carrying Lee Kuan Yew to pass by. Photograph: Ed Wray/Getty Images

"The grief we shared for Lee Kuan Yew brought us all closer together, made us stronger," he said. "Mr Lee's principles and ideals continue to invigorate this government, guide our people," the Premier said, adding that the leader's life will inspire Singaporeans and others for generations to come.

Highlighting the senior Lee's numerous initiatives for the well-being of Singaporeans, including water conservation in the city-sate without much resources, the prime minister said, "It is perhaps appropriate that today the heavens opened and cried for Lee Kuan Yew.

"As a nation, we mourn a man who made a difference," he said. President Tan pointed out that Lee's ideals were clear, he believed in and lived for these – ‘meritocracy, honesty and integrity’.

He worked his whole life to build a united people who respect and care for fellow citizens, Tan said. 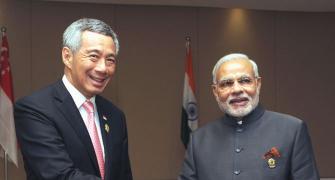 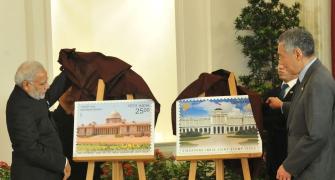 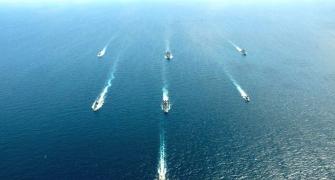 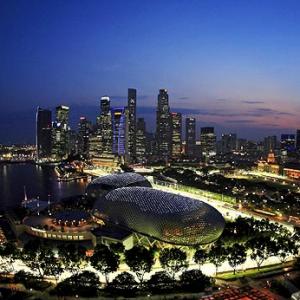 Singapore in the driving seat as it negotiates new F1 deal