Work on Lokpal Bill to be completed soon, says Singhvi

The parliamentary standing committee going into the Lokpal Bill will complete its work "soon", its chairman Abhishek Manu Singhvi said on Sunday.

"The speed and the direction of the committee are nothing short of a miracle. We are hoping to complete our work soon and fast but it is unfair to suggest timelines and deadlines," Singhvi told PTI.

The committee has been given three months time till December 7 to prepare its report.

The committee, however, was not in operation for almost a month as the term of the earlier committee ended and reconstitution took time.

Team Anna had first appeared before the committee in August this year after Anna Hazare's 13-day fast that month demanding that the Jan Lokpal Bill be passed in the Monsoon Session of Parliament.

Source: PTI© Copyright 2023 PTI. All rights reserved. Republication or redistribution of PTI content, including by framing or similar means, is expressly prohibited without the prior written consent.
Related News: Abhishek Manu Singhvi, PTI, Lokpal Bill, Monsoon Session of Parliament
Print this article
PM to address Maldivian Parliament, 1st to do so in 78 years
Manu Sharma moves Delhi HC for parole 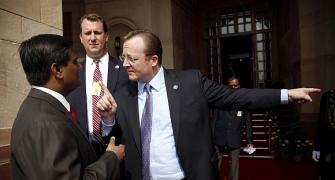