Samajwadi Party chief Akhilesh Yadav on Sunday said the National Population Register and the National Register of Citizens were against the poor people and minorities of the country, while asserting that he will not fill up the NPR form. 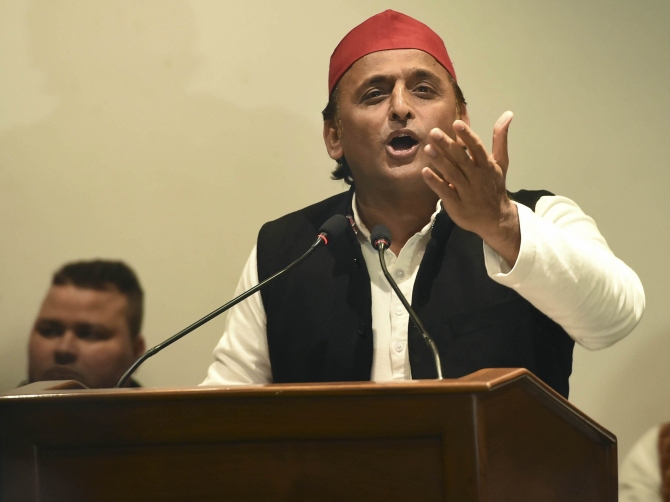 Addressing a press conference at the Samajwadi Party headquarters, he said, "Be it the NPR or the NRC, these are against the poor people, minorities and Muslims of the country."

"The question is whether we want the NRC or employment? If the need arises, I will be the first person not to fill up any form. Will you support me or not? If we do not fill up the form, we will be thrown out. I will not fill it up, you say whether you will fill it up or not?," Yadav asked young SP leaders.

"I would like to tell the policemen, who are wielding lathis on people, that the certificates of their mothers and fathers will also be sought," he said.

All Indians should come forward to save the country from those violating the Constitution, the former Uttar Pradesh chief minister said.

He alleged that this (CAA and NRC) was being done so that the public did not raise any questions about the poor state of the economy and basic problems.

"During demonetisation, the government had said corruption will end, but that proved to be untrue. Due to demonetisation, a number of banks closed down, while the GST (Goods and Services Tax) ruined businesses. The condition is such that the country's economy has come out of the ICU and gone to the ICCU," Yadav said.

"During the days of the SP government (in Uttar Pradesh), youngsters got laptops, while the BJP is taking them towards toilets. Understand the difference," he added.

Reacting to the SP chief's remarks, state Law Minister Brajesh Pathak said, "The SP and other like-minded parties are trying to spread animosity among the people of the state over the amended Citizenship Act."

Yadav also charged Uttar Pradesh Chief Minister Yogi Adityanath with doing injustice to Muslims in the garb of the action taken against anti-CAA protestors "to save his chair".

"Chief Minister Yogi Adityanath knows that 200 BJP MLAs had staged a 'dharna' (sit-in) against him inside the state Assembly. To save his chair, he is doing injustice to Muslims," he said.

Yadav claimed that if the BJP MLAs were taken into confidence, it would emerge that 300 lawmakers of the state were angry with Adityanath.

"He is afraid of this and getting injustice done by the police to save his chair," he said.

A number of BJP MLAs had staged a "dharna" against their own government in Uttar Pradesh during the recent sitting of the state assembly, after a ruling party lawmaker accused the present regime of harassing him.

Yadav also said if a probe by a retired high court or Supreme Court judge was conducted into the anti-CAA protests and the ensuing violence in Uttar Pradesh, the truth would come out.

At least 19 people were killed in widespread clashes during protests against the amended citizenship law across the state.

"It will also become clear that those who died in the violence were killed by police bullets. What is the truth that the government wants to hide?," the former chief minister wondered.