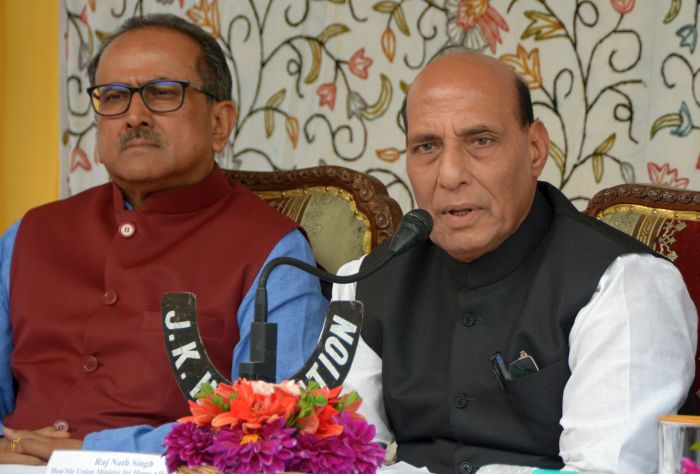 The situation in the Kashmir Valley has improved significantly over the past year and some green shoots of peace are visible, Union Home Minister Rajnath Singh said on Monday as he expressed willingness to meet every stakeholder to resolve long-standing issues.

Singh, who is on a four-day visit to Jammu and Kashmir, told reporters that the tree of peace in Kashmir has not dried up and that a permanent solution to Kashmir issue is based on five ‘C’s -- compassion, communication, coexistence, confidence building and consistency.

“After meeting the delegations and holding meetings here, I understand that the situation in Kashmir has greatly improved. I don’t want to claim that everything is completely fine but things are improving, this I can say with firm belief,” Singh said.

He said during his visit he has interacted with police and Central Reserve Police Force personnel and he will also meet the army personnel.

“I am willing to meet anyone who wants to help us in resolving problems of Kashmir. There is no question of a formal or informal invitation. Those who want to talk should come forward. I always come here with an open mind,” Singh said when asked if the government was ready to hold talks with separatists.

He said the government does not want to leave out any of the stakeholders with whom dialogue should be held.

The home minister asked Pakistan to stop infiltrating terrorists in the state so that peace with dignity can be restored.

“While paying tributes to ASI Abdul Rasheed, I again saw the picture of his daughter Zohra. I cannot forget her face. We want smile and happiness on the face of every youth of Kashmir and we will continue our efforts in this regard,” he said.

Rasheed was shot at and injured by terrorists in Anantnag district. He later died at a hospital.

The government, he said, had made sincere efforts for improving relations with all neighbouring countries including Pakistan right from the day it took office in May 2014.

“The prime minister invited premiers of all neighbouring countries to the oath ceremony. The intent was clear that we invited them not for shaking hands but for heart to heart relations. The prime minister broke all protocol and went there to attend a function. We made all out efforts.

“A B Vajpayee said we can change friends but not neighbours. But what is the neighbouring country (Pakistan) doing? They are infiltrating terrorists here. I will ask Pakistan that it should stop. We have never said that we do not want good relations with neighbours, we want it.

“Be it Vajpayee or PM Modi, everyone has made an effort but Pakistan has not responded the way it should have,” he added.

Singh said during his three days in Kashmir he saw that the tree of peace in Kashmir has not dried up.

“We could see some green shoots of peace on this tree,” the minister said.

The home minister said there was lot of speculation when he spoke about permanent solution to the problems of Kashmir. “Our permanent solution is based on five ‘C’s -- compassion, communication, coexistence, confidence building and consistency. We will continue to strive for peace with honour and dignity of the people of Kashmir,” he said.

On the legal challenge to Article 35A of the Constitution, which bars people from outside Jammu and Kashmir to acquire immoveable property in the state, Singh said the Centre has neither initiated any action nor gone to the court in this regard.

“There is no reason for doubt or speculation on this issue. Unnecessarily an issue is being made out. The central government has not initiated any process on this issue, we have not gone to the court. I want to assure that -- I am not talking about only Article 35A, whatever our government does, we will not do anything against the sentiments of the people here. We will continue to respect that.

“I think there are no issues left. It is very unfortunate,” he added.

Singh said he has reviewed the Rs 80,000 crore Prime Minister’s Development Package for Jammu and Kashmir and work is going on the projects under this programme.

“Some of the projects are big and there has been some cost escalation as well. The total worth of the package has now gone over Rs one lakh crore due to cost escalation.

“However, I have told the officials that the cost escalation should not come in the way. Detailed project reports should be prepared and work started on these projects,” he added.

Asked about the allegations that National Investigation Agency was being used to pressurise separatists, Singh said it is an independent investigating agency and the law will takes its own course.

“We have nothing to do with it. They must have evidence based on which they are acting,” he added.

Asked if any of the 55 delegations raised the issue of revocation of Armed Forces Special Powers Act from the state, Singh said no one raised this issue.

On the use of pellet guns for crowd control, the home minister said this equipment was being used very sparingly now.

“Last year we looked into the alternatives to pellet guns and introduced PAVA (grenades). Though it was not very effective, the pellet guns have been used less compared to earlier,” he said.

Singh appealed to all countrymen to visit Kashmir for tourism and trade saying there was no danger in visiting the Valley.

“I want to appeal to all people from India and around the world who are into tourism to visit Kashmir. People of Kashmir are ready to welcome you, they want to make it heaven again and take it back from the hands of terrorists. There is no danger here,” he said.

He said the Centre will launch a special promotional drive to promote tourism in Kashmir.