Women cops to be posted at Sabarimala: DGP 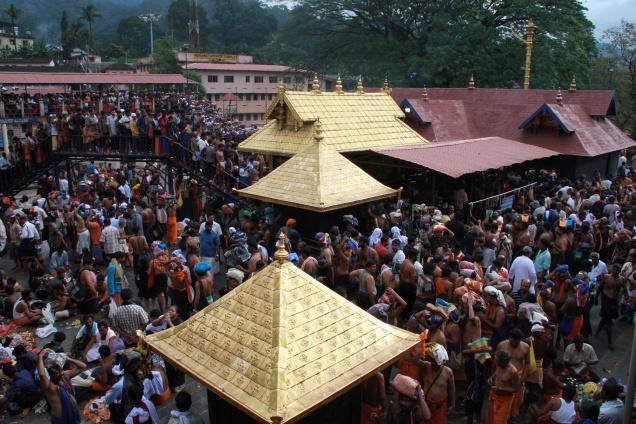 Women police personnel will be posted at Sabarimala this month to facilitate pilgrimage of women devotees in view of the Supreme Court order permitting women of all age groups to enter the Lord Ayyappa shrine, Kerala police chief Loknath Behera said on Friday.

The director general of police said everyone in the force should have to perform their duties irrespective of their religion and politics.

"They (women) will be posted there (at Sabarimala). We are a law enforcement agency. No gender, no religion... nothing. All will have to perform their duties," Behera told reporters in Kochi.

His statement comes against the backdrop of Chief Minister Pinarayi Vijayan's recent statement that the government would implement the verdict in the coming pilgrimage season itself.

A high-level meeting of the Travancore Devaswom Board, which manages the shrine, has also decided to make necessary arrangements for women pilgrims visiting the temple when it opens for the annual pilgrimage season on October 16.

The Nair Service Society (NSS), Pandalam Royal family and family of the temple's chief priest have said they would file revision petitions in the apex court against its order.

The Sabarimala temple had restricted the entry of women belonging to the age group of 10-50 as part of its age-old tradition.

On October 28, a five-judge constitution bench, headed by the then Chief Justice Dipak Misra, lifted the ban on entry of women of menstrual age into the shrine.

Amid mounting protest over the SC order, a tribal community on Friday said they would keep vigil in the hills around the Lord Ayyappa shrine to make sure that its customs are not affected.

The Mala Arayan community, which holds some traditional rights in the rituals related to the temple, said they were with the faithful protesting to protect the shrine's age old customs.

The ancestors of the community, settled in 18 hills including Sabarimala, are historically said to be close aides of Lord Ayyappa.

"People from Mala Arayan community will keep vigil of the 18 hills, including Sabarimala, to make sure that the customs of the Lord Ayyappa temple are not affected," Aikya Mala Arayan Mahasabha and its spiritual offshoot Ayyappa Dharma Sangham said.

Leaders of the community said those who were powerful and influential were violating the age old customs of the temple.

"We are saddened by the Supreme Court verdict. Our forefathers had fought wars for Lord Ayyappa. They lived and died for Him. Thousands of Mala Arayan community people will join the movement to protect the customs of the Sabarimala temple," its leaders C R Dileepkumar and K N Padmanabhan told reporters.

Meanwhile, an outfit called Antharashtra Hindu Parishad moved the Kerala high court seeking its intervention to prevent 'those who have no time for observing penance of 41 days from entering the temple'.

It alleged that the state government and Travancore Devaswom Board that manages the shrine were forcing women constables and officers, who are not prepared to work beyond Pamba at the foothills, for duty at Sabarimala.

The Congress, meanwhile, launched a protest demanding the filing of a review petition against the SC verdict.

The party's protest comes close on the heels of the Bharatiya Janata Party launching agitations, criticising the Left Democratic Front government for not filing a review petition against the verdict.

Inaugurating the Congress' protest at Pathnamthitta, which saw participation from a large number of women, Opposition leader in the state assembly Ramesh Chennithala alleged that the Rashtriya Swayamsevak Sangh-BJP and the state government were 'cheating' Hindus.

Sabarimala should not be made into a 'war zone', said Chennithala as the Congress hardened its stand against the ruling Left Democratic Front in Kerala.

He also said that the LDF government had initiated 'hasty' steps to implement the apex court's order.

"There are many other court orders which are yet to be implemented," he said.

Chennithala, who had asked the Centre to bring in a law to overturn the apex court verdict, alleged that the BJP and its ideological mentor the RSS were hand-in-glove with the LDF government on the issue.

Meanwhile, Communist Party of India-Marxist state secretary Kodiyeri Balakrishnan said the party would not take any special initiative to take people to the Lord Ayyappa temple.

Those who wish to go there can go, he said in an article in 'Deshabhimani', the party mouthpiece.

Kodiyeri also termed as 'nonsense' the BJP's charge that CPI-M was trying to 'suppress' the faith of the believers.

The verdict has put an end to women being treated as second class citizens, he said, adding that instead of being shocked, a willingness to initiate practical steps to implement the verdict was required.

"This is what the Pinarayi Vijayan government is doing", he said.

As the hill shrine will be opened for the monthly poojas on October 16 for the first time after the SC verdict, Kerala Police is gearing up to post more of its women personnel at the temple in anticipation of the influx of women devotees in the light of the verdict.

Director General of Police Loknath Behara has written to his counterparts in Tamil Nadu, Karnataka, Andhra Pradesh, Telangana and Puducherry, seeking women police personnel from their states for deployment at the temple.

Opposition BJP's feeder organisations-- Yuva Morcha and Mahila Morcha had organised agitations in the last two days against the government decision not to file a review petition.