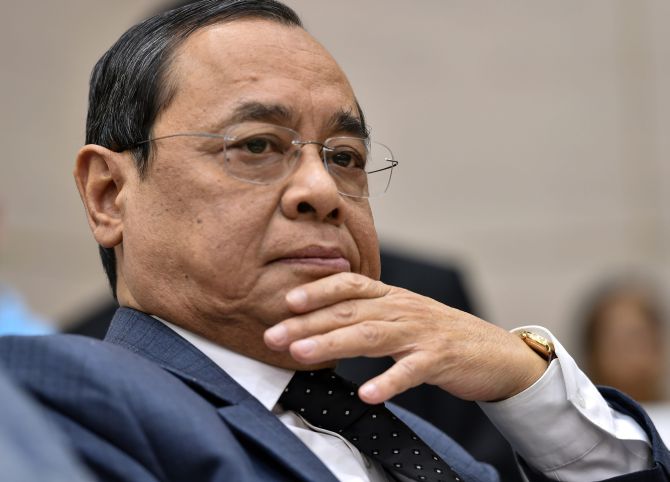 A former apex court employee, who levelled allegations of sexual harassment against Chief Justice of India Ranjan Gogoi, appeared on Friday before the in-house inquiry panel and recorded her statement.

The three-member panel, headed by Justice S A Bobde, conducted its first in-chamber sitting during which the woman and the secretary general of the apex court appeared before it, an official source said.

The source said the secretary general was present before the panel, also comprising two women judges -- Justices Indu Malhotra and Indira Banerjee -- with all documents and materials.

During the hearing, only the woman was present and the secretary general was not privy to the proceedings, the source said.

An activist advocate who had accompanied the woman to the apex court was not part of the proceedings, the source said.

It is learnt that the next hearing will take place on Monday.

The source also said that the proceedings went on for around three hours, --- starting at 12.30 pm, till around 3.30 pm-- during which the woman recorded her statement. During the hearing there was also a brief break.

The in-house inquiry proceedings into the sexual harassment allegations is distinct from the probe to be carried out by the court-appointed Justice A K Patnaik (retd) panel which would inquire into the claims of an advocate about a larger conspiracy to frame the CJI and fixing of benches.

On April 23, Justice Bobde had told PTI that the in-house procedure did not contemplate representation of advocates on behalf of parties as it was not a formal judicial proceedings.

"This is going to be an in-house procedure which does not contemplate representation of advocate on behalf of parties. It is not a formal judicial proceeding," he said.

He had clarified that there was no time frame to complete the inquiry and the future course of action will depend on 'what comes out of the inquiry' which will be 'confidential'.

Justice Indu Malhotra was on Thursday appointed a new member of the committee after Justice N V Ramana recused himself.

The development followed the complainant's letter to the panel on Wednesday, expressing reservation over the inclusion of Justice Ramana on the ground that he is a close friend of the CJI and a regular visitor to his house.

In the letter, she had also raised question over the presence of only one woman apex court judge -- Indira Banerjee -- in the panel set up to examine her allegations against the CJI. According to her, it was not in accordance with the Vishaka Guidelines.

Justice Ramana, while recusing himself, had termed as 'baseless and unfounded' the 'aspersions' cast by the woman on him.

He said he recused only to 'avoid any suspicion that this institution will not conduct itself in keeping with the highest standards of judicial propriety and wisdom'.

The woman's allegations against the CJI were brought into the public domain by some news web portals on April 20.

She had worked at Justice Gogoi's home office in Delhi and the allegations were carried by the news portals based on her affidavit which was sent to 22 judges of the top court.

In her affidavit, the woman described two incidents of alleged harassment, days after Justice Gogoi was appointed CJI last October and her subsequent persecution.

The woman alleged that she was removed from service after she rebuffed his 'sexual advances'.

She claimed that her husband and brother-in-law, both of whom were head constables, were suspended for a 2012 criminal case that had been mutually resolved. 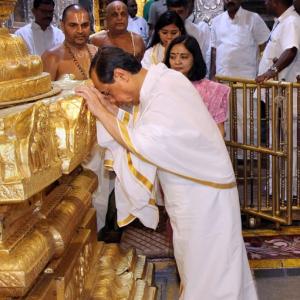 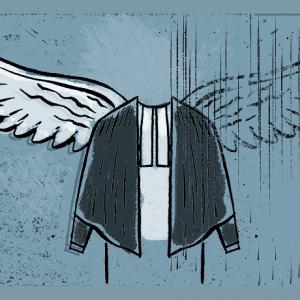