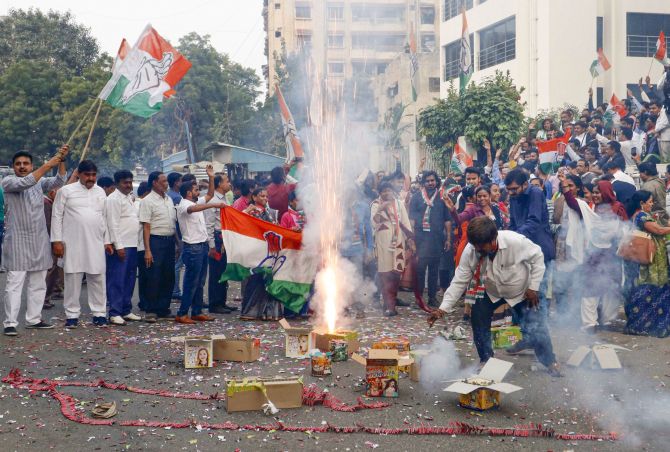 The victory of the Jharkhand Mukti Morcha-Congress alliance in Jharkhand has come as a moral booster for opposition unity and for the grand old party seeking to become relevant again in Indian politics after suffering two successive defeats in general elections.

Party leaders feel that the Bharatiya Janata Party is not invincible and can be defeated if like-minded parties get together.

This, they feel, has been proved right in some states and the experiment can be implemented in upcoming polls.

The poll results indicate that local and real issues of farm crisis, economy and unemployment have found more resonance at the ground and that bodes well for the opposition in future polls to win back states from the BJP.

The Jharkhand poll results also show that the caste equations against BJP are consolidating.

A Congress leader said the BJP has lost the support of tribals by installing a non-tribal chief minister in the tribal dominated state.

Tough the Congress has returned to power in seven states with the latest victory in Jharkhand, its last two successes have come primarily with the support of allies.

While Congress is in power in the states of Punjab, Rajasthan, Madhya Pradesh, Chhattisgarh and Puducherry on its own, it has come to power in Maharashtra and Jharkhand jointly with the support of its allies Shiv Sena and Nationalist Congress Party and Jharkhand Mukti Morcha.

Party leaders feel the latest victory in Jharkhand is a lesson taught by the people of the state to the 'arrogance' of the BJP and its leadership.

Some feel it is also the defeat of BJP's 'corruption'.

They feel the alliance of like-minded parties in some states can bring opposition unity in states and oust the BJP from power.

Congress leader and in-charge for Jharkhand affairs, RPN Singh said the Congress and the alliance leaders raised the local issues of unemployment, farm distress, economic distress and increased debts and these issues touched the people of Jharkhand, who came out in favour of the alliance.

"We raised the issues of Jharkhand which are also the issues of the people of India. Unemployment, farm distress, economic crisis and rising debts, starvation deaths are issues that touched the people of Jharkhand. Prime Minister Narendra Modi and Home Minister Amit Shah tried to divert and distract from the real issues but that failed to cut ice with the common people," Singh told PTI.

On opposition unity, he said it worked out well on the ground as workers of the alliance partners performed unitedly at all levels that gave good results.

"The opposition unity and better coordination can be replicated in other state elections too and this will give positive results," he said.

Party leaders feel the opposition needs to work closely and grab power in states through better coordination in state elections.

With Jharkhand joining the growing list of states slipping out of BJP's rule, the party now governs mere 35 per cent of the country's landmass in comparison to over 71 per cent during its peak in 2017 when it was in power in the entire Hindi-speaking heartland.

Its string of losses in states despite the massive victory in the April-May Lok Sabha elections may force the party's top brass to revisit its strategy for the assembly polls as it prepares for the upcoming battles in Delhi and Bihar.