'We are caught between the devil and the deep blue sea' 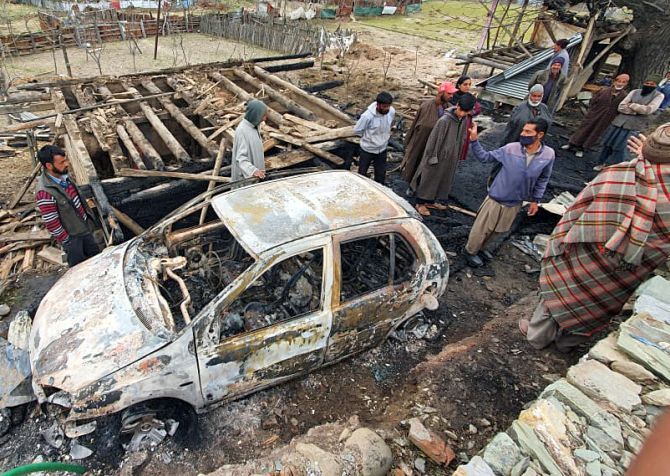 With the threat of coronavirus looming large and intense shelling by Pakistan, villagers living along the Line of Control and International Border in Jammu and Kashmir are stuck between the devil and the deep sea.

For the last month, Pakistan has targeted villages and army posts along the LoC and IB in the union territory killing and injuring several people besides damaging more than two dozen houses.

While several attempts were made by infiltrators in the last few days to enter India along the LoC in Kupwara, Poonch and Rajouri districts of Jammu region with Pakistani army providing cover fire to them.

There is heightened fear in the villages under the three districts especially after three civilians were killed last week in Kupwara due to shelling by Pakistan.

"I was seriously injured in the shelling by Pakistan… On one side we are fighting to save our families from the threat of coronavirus and on the other they (Pakistan) are targeting us in our houses," Showkat, a resident of village Kasba in Poonch district said.

"We are caught between the devil and the deep blue sea,” he added.

Corroborating his views, Balakote resident Mumtaz Bibi said the villagers have urged the administration to build bunkers for them but their plea seems to have fallen on deaf ears.

“We had demanded that bunkers be built so that we can save our families from Pakistan shelling. We met district officials but nothing has been done yet. Three shells hit our houses recently and we narrowly escaped," she said.

"We can still save our families from coronavirus by following all guidelines but how do we protect ourselves from mortar shells?” asked Mumtaz who said that her home had been “totally damaged” due to shelling.

However, a district officer said the process of setting up bunkers along the LoC in all the border districts had been initiated sometime back but the due to the coronavirus pandemic, work had to be stopped.

"We will ensure that bunkers are built for people living along the LoC," he said.

Shahzad Malik, a social worker active in the border belt of Rajouri-Poonch said people living along the LoC and IB in Kupwara, Rajouri, Poonch, Samba and Kathua districts are a terrorised lot and in trouble.

"The border situation is very tense and along with people, hundreds of animals have been killed… We want the shelling to stop. The coronavirus outbreak has only added to the woes of the people," he said.

Anwar Din of Keran village said: "We want to urge Pakistan and India to stop the shelling. We are fighting the COVID-19 epidemic. Let us allow us to live in peace in this hour of crises."

The army has been educating the border residents about COVID-19 and providing them masks and sanitisers apart from ensuring essential food supplies during the lockdown period.

"Army has come to our rescue with food and other essentials while Pakistan is resorting to shelling and killing people," Sudershan Singh of Laam village, which saw heavy shelling last week, said.

For more than a month now, Pakistan has resorted to shelling along the LoC in Tumina, Panzgam, Chowkibal, Rawathpora among others in Kupwara district, Uri sector in Baramulla district, Krini, Balakote, Mankote, Qasba among others in Poonch district, Laam, Nowshera, Sunderbandi, Manjakote in Rajouri district and Hiranagar, Samba, Ramgarh sectors along the IB in Samba and Kathua districts.

Three civilians including a minor and a woman were killed in the shelling from across the LoC in north Kashmir's Keran on Sunday.

Five army personnel and as many infiltrating terrorists were killed in a fierce gun battle between the forces and a terrorist group that had infiltrated from across the Line of Control in Keran sector of north Kashmir on Saturday.

There were a total of 646 incidents of ceasefire violation along the IB and LoC between January 1 and February 23 this year, Minister of State for Defence Shripad Naik had said in March.

More than 3,200 ceasefire violations by Pakistan troops were recorded in 2019. There is 198 km IB and over 510 km of LoC with Pakistan in Jammu and Kashmir.

Anil Bhatt
© Copyright 2020 PTI. All rights reserved. Republication or redistribution of PTI content, including by framing or similar means, is expressly prohibited without the prior written consent.