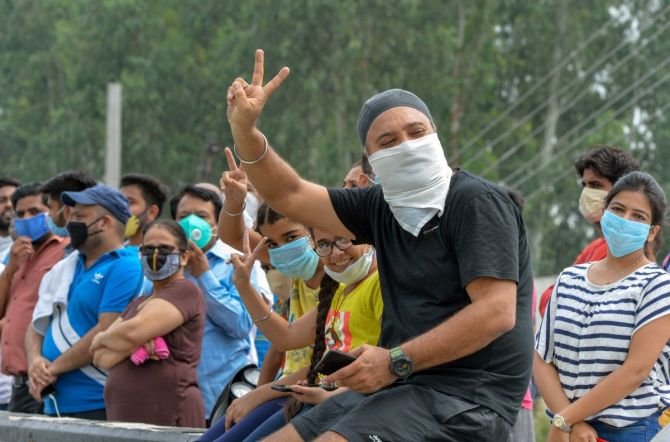 IMAGE: Locals cheer during the touchdown of five Rafale combat jets from France at the airbase, at the entry point of Ambala. Photograph: PTI Photo

Despite many restrictions put in place by the authorities, some people took to streets to catch a glimpse of the fighter jets.

Authorities had imposed prohibitory orders near the Ambala Air Force Station, banning shooting of videos and photography while Section 144, which prohibits assembly of four or more people, was imposed in the villages adjoining the air base, including Dhulkot, Baldev Nagar, Garnala and Panjkhora.

The Haryana Police set up several check barricades, especially within the 3 km radius of the air base, and police officers were seen patrolling residential localities near the air base, making announcements over loudspeakers warning people not to stand on the rooftop of their houses to click pictures or shoot videos.

Violators would face punishment as per the law, they warned.

However, the restrictions failed to dampen the enthusiasm of the people, many of whom took to streets in a celebratory mode, especially in the Ambala Cantonment area, to catch a glimpse of the French-manufactured jets.

Some youth were also seen shooting video on their smartphones.

"Rafale hai Rafale, yeh Rafale tha, ek aur aaya, yeh doosra hai... ek aur aa gaya, yeh panchva gaya bilkul upar say gaya (This is Rafale, yeah, this is, this was the first one, here goes one more, now another one..now the fifth one just flew above us),” a youth who was shooting the video from his mobile phone and enthusiastically counting the jets as they flew above was heard telling his friends.

At the bazaars in Ambala Cantt area, traders and ex-servicemen released hundreds of tri-coloured balloons in the air and raised 'Bharat Mata ki Jai' slogans.

An association of ex-servicemen was also seen in one locality celebrating the arrival of Rafale.

At many places people were seen distributing sweets and dancing to beats of 'dhol' as the Rafale jets landed here.

At some places, hoardings had been erected to welcome the arrival of the jets with some of these mentioning that their induction will further boost IAF's capabilities.

The Air Force road leading to the IAF station here had been completely sealed with security personnel not permitting any civilian movement.

A battery of mediapersons reported from outside the gates of the IAF station in Ambala Cantonment as formal induction ceremony has been planned next month and entry inside the base was not allowed.