Of the nearly 4.6 crore people living as slaves globally, two-thirds, or 3.04 crore, are in the Asia-Pacific region, with the highest number in India. IMAGE: The report said that while India had more people enslaved than any other country, it had  made significant progress in introducing measures to tackle the problem. Reuters photograph for representational purposes only

India has the dubious distinction of having the highest number of people in the world trapped in modern slavery with 1.83 crore victims of forced labour, ranging from prostitution and begging, according to a new report, which estimated that nearly 46 million people are enslaved globally.

According to the 2016 Global Slavery Index released by Australia-based human rights group Walk Free Foundation on Tuesday, an estimated 4.58 crores people, including women and children, are subject to some form of modern slavery in the world, compared to 3.58 crores in 2014.

The report said India has the highest absolute numbers of people trapped in slavery with 1.835 crore slaves among its 1.3 billion population while North Korea has the highest incidence (4.37 per cent of the population) and the weakest government response to deal with it.

Incidences of slavery were found in all 167 countries in the index, with Asian countries occupying the top five for people trapped in slavery.

Behind India was China, Pakistan, Bangladesh and Uzbekistan.

The index said that these five countries combined accounted for almost 58 per cent of the world’s enslaved, or 2.66 crore people.

The index presents a ranking of 167 countries based on the proportion of the population that is estimated to be in modern slavery.

Modern slavery refers to situations of exploitation that a person cannot leave because of threats, violence, coercion, abuse of power or deception. 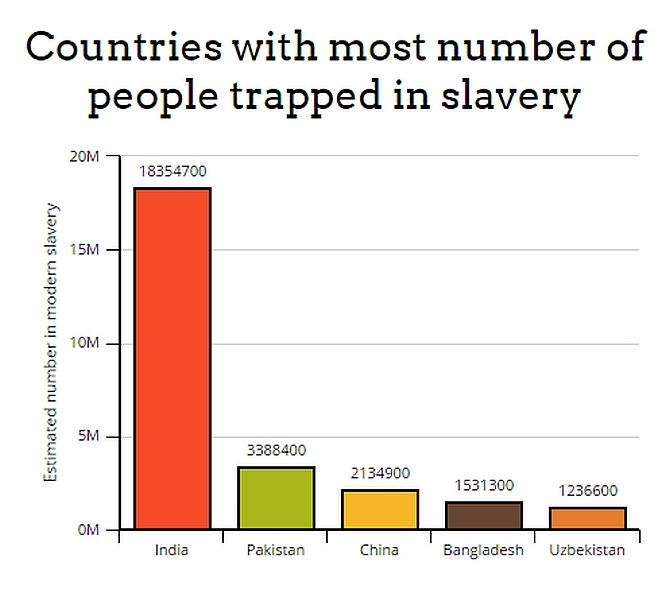 The research included over 42,000 interviews conducted in 53 languages across 25 countries, including 15 state-level surveys in India. These representative surveys covered 44 per cent of the global population.

The countries with the highest estimated prevalence of modern slavery by the proportion of their population are North Korea, Uzbekistan, Cambodia, Cambodia, India, and Qatar.

The countries with the lowest estimated prevalence of modern slavery by the proportion of their population are Luxembourg, Ireland, Norway, Denmark, Switzerland, Austria, Sweden and Belgium, the United States and Canada, and Australia and New Zealand.

The study also tracked the government actions and responses to the modern slavery and of the 161 assessed, 124 nations had criminalised human trafficking in line with the UN trafficking protocol and 96 nations had developed national action plans to coordinate government response.

It noted that while India had more people enslaved than any other country, it had  made significant progress in introducing measures to tackle the problem.

Governments taking most action against slavery

“It has criminalised trafficking, slavery, forced labour, child prostitution and forced marriage. The Indian government is currently tightening legislation against human trafficking, with tougher punishment for repeat offenders. It will offer victims protection and recovery support,” it said.

It said that in addition to economic growth in India, ambitious programmes of legal and social reform are being undertaken right across the board, from regulation of labour relations to systems of social insurance for the most vulnerable.

The governments that have the strongest response to modern slavery are The Netherlands, the United States of America, the United Kingdom, Sweden, Australia, Portugal, Croatia, Spain, Belgium and Norway.

Seeking strong laws to abolish slavery, Andrew Forrest, chairman and founder of Walk Free Foundation, said eradicating slavery makes sense, morally, politically, logically and economically, and called on the governments of the world’s leading economies to provide an example to others by enacting and implementing robust anti-slavery measures.

“We call on governments of the top 10 economies of the world to enact laws, at least as strong as the UK Modern Slavery Act 2015, with a budget and capability to ensure organisations are held to account for modern slavery in their supply chains, and to empower independent oversight.”

Forrest said leaders of the world’s major economies must bring the power of business to this issue, by requiring a focus on supply chain transparency.

“I believe in the critical role of leaders in government, business and civil society. Through our responsible use of power, strength of conviction, determination and collective will, we all can lead the world to end slavery,” he said.

Forrest emphasised the key role that business needs to play in eradicating slavery.

“Businesses that don’t actively look for forced labour within their supply chains are standing on a burning platform. Business leaders who refuse to look into the realities of their own supply chains are misguided and irresponsible,” he said. 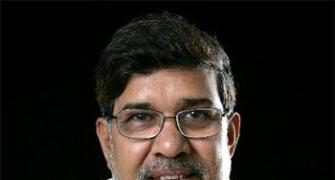 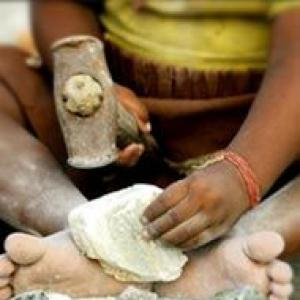