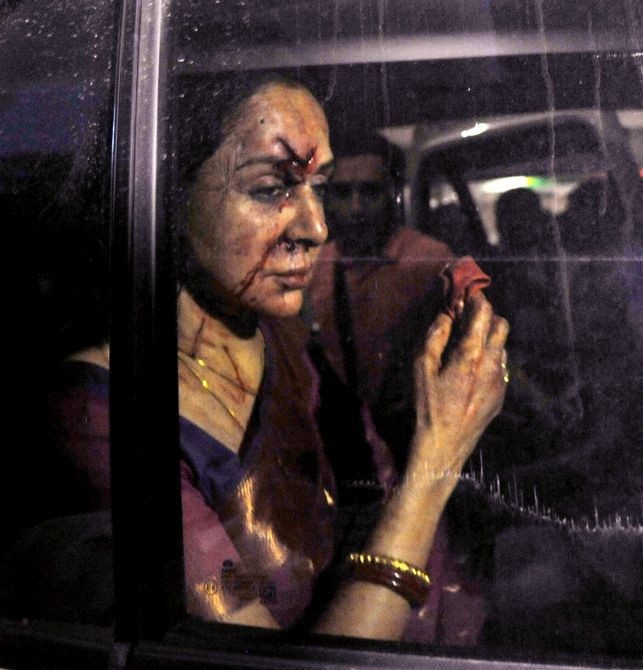 Bharatiya Janata Party MP Hema Malini on Wednesday blamed the father of the four-year-old girl for the child's death in the road accident involving the actress' Mercedes, saying had he followed traffic rules, his daughter's life could have been saved, comments which evoked angry reaction from him.

The actress, who received injuries in the mishap, said, “My heart goes out to the child who unnecessarily lost her life and the family members who have been injured in the accident.”

“How I wish the girl's father had followed traffic rules, then this accident could have been averted and the little one's life saved,” she tweeted.

Sonam was killed while five others were injured including the actress when Hema's Mercedes collided with another car on July 2 in Rajasthan's Dausa district.

The 66-year-old actress had undergone surgery for her wounds in a hospital in Jaipur last week.

The victim's father Hanuman Mahajan alleged that it was Hema's Mercedes which was speeding above 100 km per hour when his car was hit.

“I feel very sad that Hemaji, an MP, has such a small 'soch' (thinking) that she tweeted that I was not following traffic rules,” Mahajan, who is convalescing in Trauma Hospital in the Pink City, told PTI.

“Big people can say anything from anywhere... If she has courage... she should come before me and say what she has to. I like to know from her one traffic rule that I violated... whether I was driving at very high speed, or whether I was on the wrong side, or I did not give an indicator... or I did not put seat belt,” he said.

“My mistake was that I was driving at a very slow speed and her car was at high speed,” he said, adding, “Why was her driver arrested and released on bail. We have filed the case with the Kotwali Police Station in Dausa district.”

Soon after the mishap, Mahajan had said that Sonam could have been saved had she been rushed to the hospital with the actress.