Willing to step down, but fear civil war: Yemen's Saleh

Yemen's embattled President Ali Abdullah Saleh has said he was willing to transfer power "to the people" but feared a civil war in the absence of political dialogue, as key ally United States voiced concern that his fall would pose "a real problem" for counter-terrorism efforts.

Saleh's regime has been rocked by massive protests since January prompting several top military officials and tribal leaders to defect in open support of the protesters. Cornered by relentless street protests, Saleh said he would not mind stepping down if allowed a dignified departure, but warned that Yemen was a "time bomb" and could slide into civil war if transfer of power was done in a hurry.

As the president sought to dispel the notion that he was trying to hold on to power, reports from the country's south said that Islamic militants there had seized control of a weapons factory and a town.

Reports said that suspected Al Qaeda militants had killed seven Yemeni soldiers in attacks on an army convoy and a government building on Sunday near Marib, east of the capital.

US Defence Secretary Robert Gates, meanwhile, voiced concern over the eventual possibility of Saleh's departure, and its impact on the campaign against the Al Qaeda. "I think it is a real concern because the most active and at this point perhaps the most aggressive branch of the Al Qaeda, Al-Qaeda in the Arabian Peninsula, operates out of Yemen," Gates said.

"So if that government collapses, or is replaced by one who is dramatically more weak, then I think we'd face some additional challenges out of Yemen, there's no question about it. It's a real problem," he added.

A day after he put a brave face to insist that his regime was unshaken by the course of events of the past two months, Saleh said in an interview to Al Arabiya television that he was prepared to leave in "a few hours" but he had the responsibility to take the country to "safe shores". "I could leave power even in a few hours, on condition of maintaining dignity and prestige," Saleh told Al Arabiya TV. "I will transfer power to the people, who are the source and owner of power," he added.

Saleh asked his opponents to learn from the example of Somalia, warning that Yemen was a "time bomb" and could slide into a civil war like situation if the current crisis was not handled properly. "If we do not act, along with good-willed and friendly countries, to close the rift and start a political dialogue, there will be a devastating civil war that will disturb the whole region," he said.

Though talks have been on to hammer out a deal for a peaceful transition of power, the opposition has said they believe the president is "maneuvering".

The opposition says there is still a large gap between opposition demands and what the government is prepared to offer. "We still have a very big gap," Yassin Noman, the rotating head of Yemen's opposition coalition was quoted as saying by the channel.

Al Arabiya said issues like Saleh's demand for a guarantee that he and his family would not be pursued legally could be holding out a deal. 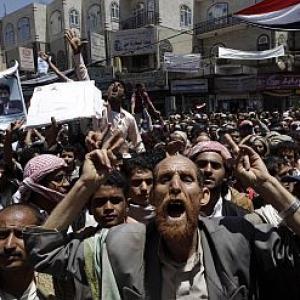 Yemen President offers to step down by year-end