News
Business
Movies
Sports
Cricket
Get Ahead
Money Tips
Shopping
Sign in  |  Create a Rediffmail account
Rediff.com  » News » Will work for cause of Kashmir from jail: Ghulam Nabi Fai

Will work for cause of Kashmir from jail: Ghulam Nabi Fai

On the eve of his imprisonment last month defiant Kashmiri separatist leader Syed Ghulam Nabi Fai said that charges leveled against him for being a ISI agent have been withdrawn. Aziz Haniffa reports

On the eve of his imprisonment last month for conspiracy and violations of various tax laws pertaining to a non-profit organisation, Kashmiri separatist leader Dr Ghulam Nabi Fai was feisty and defiant at several meetings across the country, pledging to continue his work "for the cause of Kashmir."

Fai, who was scheduled to begin his two-year imprisonment at a minimum-security penitentiary called the Federal Correctional Institution in Cumberland, Maryland, told supporters that there was no restriction on him to continue his efforts toward self-determination and independence for the Kashmiri people. He continued to point out that the initial charges levelled against him that he was an agent of the Pakistan's Inter-Services Intelligence and took his marching orders from the ISI had been withdrawn by the prosecution.

The executive director of the Washington-based Kashmiri American Council in two recent meetings in Tyson's Corner Virginia at the popular Bombay Tandoor restaurant and in Fremont, California, to packed audiences of Kashmiri Muslims and Pakistani Americans, asserted that the charges that he had conspired to violate the Foreign Agents Registration Act by not declaring that he was acting on behalf of a foreign entity -- the ISI -- had also been dropped by the prosecution.

He said that Judge Liam O'Grady, who had sentenced him for two years imprisonment for tax law violations had clearly said that the sentencing "is necessary, even though you have done some very moving things on behalf of the Kashmiri people and that your cause is a wonderful cause."

Continuing to quote O'Grady, Fai asserted, "He said,  'I sincerely hope that while you're at a minimal security facility like Cumberland, that I see no reason why you can't continue to advocate on behalf of the Kashmiri people and to write,' and that while 'I know that the KAC is dormant, I guess is the word for it at this stage, but there may be an opportunity to arrange conferences through other people in the future, and I hope that cause continues to be identified as an important international matter. And good luck to you'."

He then lashed out at the successive Indian governments for its alleged persecution and gross human rights abuses against the Kashmiri people saying that it committed all these atrocities under the guise "of the world's largest democracy," and declared, "There is no democracy in Kashmir; only military rule and the law of the gun. In fact the presence of more than 7,00,000 Indian military and paramilitary forces have made Kashmir the largest army concentration anywhere in the world."

Fai asserted that the only solution to the 65-year-old Kashmiri imbroglio had to be a consensus among the 17 million Kashmiri people and warned that nothing short of it would endure just as nothing that didn't command a consensus among people of East Timor had succeeded until the East Timorese had been brought into the political process and a referendum held on independence from Indonesia.

But Fai in quoting Judge O'Grady to his supporters was only providing part of what the judge had said at his sentencing on March 19 in throwing the book at him and sending him to prison for two years, followed by three years of probation.

The only reprieve that the judge offered Fai was permitting him to self-surrender after attending the graduation of his daughter from college in June 25.

After listening to both the prosecution and defense and also a lengthy statement from Fai, who was both defiant and remorseful, where he said that everything he did was for the love of the people of Kashmir and that "words possibly can't define the damage that I have done to my beautiful family and friends in the US and the damage that I have done to the Kashmir cause," the judge said, "sentencing is necessary" and he would have to serve jail time.

O'Grady said, "I do not think you are ready to believe that by your acts you did great harm to the US -- you ignored that even after the FBI brought this to your notice."

"You participated in a conspiracy to defraud the US and completely deceive the IRS," the judge said, and noted, "You knew Pakistan and the ISI was paying you in a manner because your actions would be consistent with theirs and you would represent their voice and you were willing to do so."

O'Grady, said, "You were willing to defraud the IRS, willing to be allowed being given money by the Straw Donors to fund the Kashmir American Council to cover up the source of your funding and to engage with the Pakistani intelligence agency."

The judge said it was "troubling" that despite being approached by the FBI and other US government officials in March 2007 and again in 2010 and informed that what he was doing was illegal lobbying because he had not registered himself with the Department of Justice under the Foreign Agents Registration Act, "you did not admit the role that the Pakistan government and the ISI was playing in the KAC."

O'Grady said, "The money that you received also allowed you to lead a comfortable life in the US, raise your kids and help the cause of Kashmir."

Fai protested that he did not tow the Pakistan or ISI line and that all his efforts were geared towards espousing the cause of Kashmiri independence, unlike Pakistan, which wanted to make Kashmir a part of its territory. "I never intended to harm anybody in the world, never intended to harm the US," he said. "My sole motivation was to work for the people of Kashmir and their right of self-determination."

"I know the road to freedom is long, but there is no short cut," he declared and he went on to talk about the innumerable articles he had written and senior Indian government officials he had met with in addition to other leaders of the international community in order to find a peaceful solution to the Kashmiri imbroglio.

But O'Grady, while appreciating that "I do not doubt your love for the people of Kashmir," not only threw the book at him but said he could not maintain any contact with any Pakistani government officials or ISI agents though he could continue to write as many articles as he wanted to for the cause of Kashmir from this jail cell.

During the sentencing hearing Fai's attorney Nina Ginsburg had argued,  "Judge, I think (Assistant US Attorney) Kromberg's arguments to the court are appalling.  [Federal investigators] have a lot of words that were captured in intercepts, 20 years of intercepts, hundreds of thousands of interprets, and Kromberg cannot stand in front of this court with one example of a statement, a public statement by Dr Fai, a writing by Dr Fai, a position taken at a conference he sponsored, not one, not one word, that is anything that could be characterised as propaganda for the Pakistani government."

Ginsberg also took exception to the government's efforts to paint Fai as an extremist with ties to the Muslim Brotherhood and that although the prosecution had been monitoring his email and phone calls surreptitiously for 20 years, could produce no evidence to back up those assertions.

She said that although Fai knows many members of the Muslim Brotherhood, he is not a part of this organisation.

The event at the Bombay Tandoor restaurant was sponsored among others by the Pakistan Link newspaper, the leading Pakistani American community newspaper. Its president Hamid Malik said, "The Kashmiri American community is honoured to have  people like Dr Ghulam Nabi Fai who has dedicated his life for the cause of the people of Jammu and Kashmir. We remain indebted to him for his friendship and leadership during the past two decades."

Meanwhile, Fai's address in Fremont was under the aegis of the American Muslim Alliance and the Islamic Society of North America, and among the speakers who lavished kudos on him were Imam Zaid Shakir, Zaytuna College in Berkeley, California, Dr Imtiaz Khan, vice president of the Kashmiri American Council, Dr Hatem Bazian, Professor at the University of California, Berkeley, Dr Agha Saeed, chairman of the American Muslim Alliance, Dr Mohammad Ahmadullah Siqqidui, professor of journalism and public relations at Western Illinois University, Macomb, Illinois, Naeem Beg, the vice president of the Islamic Circle of North America, Mark Hinkle, former chairman of the US Libertarian Party and Edward Hasbrouck, author and freelance journalist.

The programme began with an address via Skype link by the Jammu Kashmir Liberation Front leader, Yasin Malik, from Srinagar, who spoke of the alleged atrocities against the Kashmiri people by the Indian troops and para-military forces and asserted that "the basic reason of unrest in the state is the usurpation of our freedom and prolonging of solution to our political problems."

Yasin while predicting that "there will be peace once the Kashmir issue is resolved in accordance with the wishes and aspirations of its people," also warned that while "at present the struggle of the Kashmiri people is a non-violent movement and if the global community did not give attention, this may be turned into a violent movement."

The meeting was also addressed by Fai's wife, Qadr Chang Fai, who thanked everyone for supporting her husband "at this critical moment," and said, "Life is a journey and each and every day or year is just like you peel an onion, it doesn't matter how careful you are, it sometimes causes tears."

She said. "Sometimes obstacles and difficulties let us know what is our weakness and it gives us a chance and opportunity to make us strong."

But she asserted to sustained applause that "I am sure when my husband returns, after two years vacation, he will come up fresh, strong and we will again work for the cause of Kashmir."

"This chapter is over and together we flip the page and start a fresh new chapter of Kashmir's history. We will make sure that we achieve the goal and the goal is that liberty bell rings at every corner of Kashmir which is the paradise on the earth," she concluded. 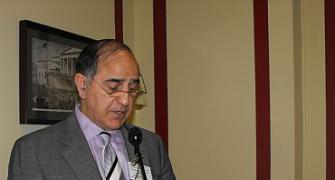 REVEALED: How 'ISI spy' Fai pushed anti-India agenda in US
Fai pleads guilty for being ISI agent in United States