Will work for BJP's acceptability to all sections: Ex-minister Naqvi

Senior Bharatiya Janata Party leader Mukhtar Abbas Naqvi on Thursday said that during his tenure as the minority affairs minister he ensured there was no "symbolism" and asserted that going forward he would work to ensure that the party has acceptability in all sections of the society. 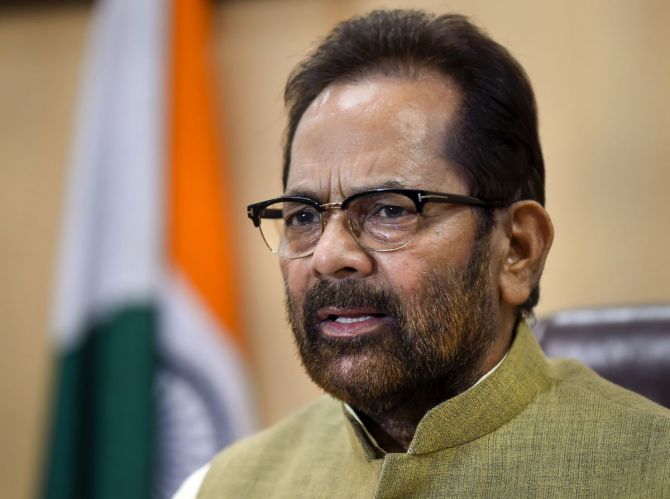 A day after he resigned from the Union Cabinet, Naqvi told PTI that his tenure in Parliament has ended on Thursday but his political and social journey will continue.

"Sitaron se aage jahan aur bhi hain, abhi waqt ke imtihan aur bhi hain (there are still many challenges ahead in life). The way I have been working with full commitment to the welfare of society, I will continue to do so. Getting a responsibility is not as important as feeling responsible and being aware of the responsibility on your shoulders," he said.

Naqvi, who quit as minister a day before his term in Rajya Sabha ends, said he will continue to work for the weaker sections of the society and "the last person in the queue".

"I would work to ensure that they join the mainstream of progress and have a feeling of development with dignity," he said.

Lauding Prime Minister Narendra Modi, Naqvi said he has established the culture of "converting hard work into results" which will remain an ideal for any government.

Asked about his future plans, the senior BJP leader said, "I will constantly work for the party and do whatever is possible as a party worker to ensure that the party has acceptability in all sections of the society."

On his tenure as the Union minister, Naqvi said he was satisfied with the work he had done and made all efforts to ensure that the ministry doesn't function like a "part-time ministry".

"Also, I ensured that there is no symbolism and the benefits from the work of the government reach the people," he asserted.

"Hunar Haat, employment, employment opportunities and many other initiatives were taken that manifest the work that was done on the ground," Naqvi said.

The prime minister is learnt to have lauded Naqvi's contribution to the country and the people during Wednesday's Cabinet meeting.

Naqvi was also the deputy leader of Rajya Sabha.