Will waive farmers' loans if voted to power: Rahul 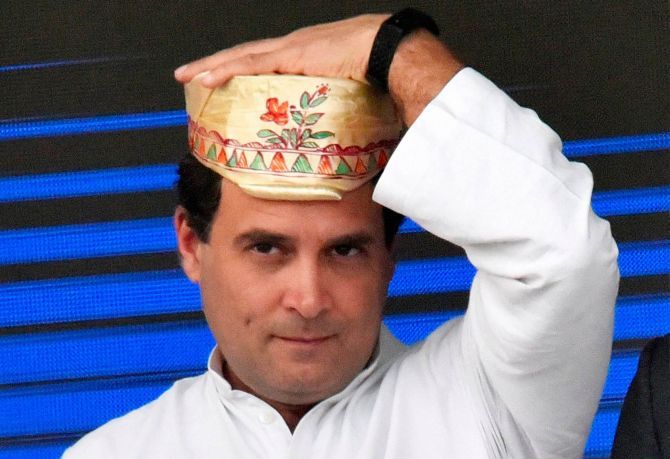 Congress president Rahul Gandhi on Sunday said his party would waive farm loans and give a big push to the food processing industry if voted to power in the Lok Sabha elections.

Alleging that the Centre's crop insurance scheme is 'aimed at taking away the hard-earned money of farmers to fill up the pockets of big businessmen', he promised that the Congress would initiate a number of steps to deal with farmers' distress and unemployment.

Gandhi said, his party's governments in Rajasthan, Madhya Pradesh and Chhattisgarh waived farm loans within a few days of coming to power.

The Congress president, who was addressing the party's first rally in Patna in about three decades at the Gandhi Maidan, repeated his slogan 'chowkidaar hi chor hai' (the watchman is the thief) in an allusion to Prime Minister Narendra Modi.

Gandhi said that he had already told the chief ministers of Rajasthan, Chhattisgarh and Madhya Pradesh that these states should take the lead in ushering in the second Green Revolution.

"We will do what is needed for providing relief to farmers and jobs to youths. We will waive their debts and give a major boost to the food processing industry. 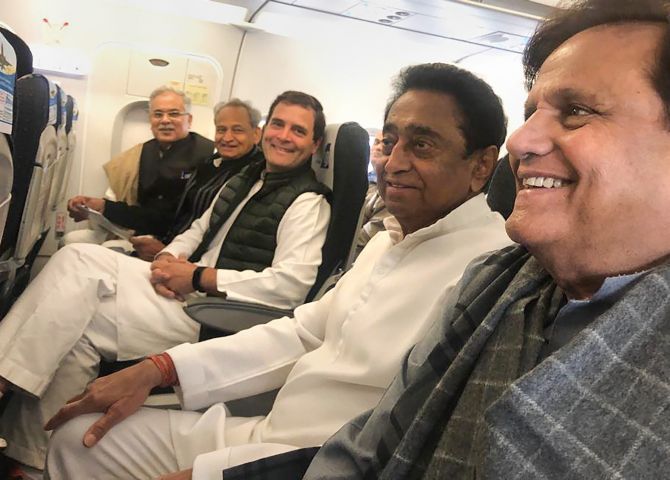 "I have told the Chief Ministers of Rajasthan, Chhattisgarh and Madhya Pradesh that these states should take the lead in ushering in the second Green Revolution," he said.

"We fulfilled our promises in the three states within weeks of coming to power. We will do so across the country once elected at the Centre," the Congress president said.

He said the Congress would also ensure a minimum income for every poor person unlike the 'false promise' of Rs 15 lakh to all made by Modi ahead of the 2014 Lok Sabha polls that was never fulfilled.

"The winds of change are blowing. The Congress will win the next Lok Sabha polls with the help of allies and our alliance will also win the next Assembly polls in Bihar," Gandhi claimed.

After the rally, in a moving Facebook post in Hindi, he said, "Bihar has been the land of peace but when the time comes, it transforms into a land of revolution. Today, millions lent their voice to the call for change at Gandhi Maidan. We have to strengthen the hope it has roused. We have to build an India of the aspirations of Indians."

Addressing the rally, Gandhi accused the NDA government at the Centre of committing irregularities in the Rafale deal.

He said when the Congress was in power, it had started negotiating the Rafale deal, insisting that aircraft be manufactured at the Hindustan Aeronautics Limited (HAL) in Bengaluru.

This would have benefitted jobless youths from Karnataka, Bihar, Uttar Pradesh, Odisha etc but Modi changed all that, the Congress president said.

"He (Modi) undertook tours of various countries and came up with defence deals which would benefit only a private person like Anil Ambani. Manohar Parrikar, who was formerly the defence minister, expressed his disapproval and so did officers of the Indian Air Force, but Modi went on to have his way," Gandhi charged.

Lamenting that Bihar has become 'a centre of unemployment' unlike the centre of learning" in the ancient times, Gandhi promised that in the event of his party coming to power at the Centre, Patna University would be granted central status.

It may be noted that Bihar Chief Minister Nitish Kumar had made a fervent request for grant of central status to the university at its centenary celebrations in 2017 which was attended by PM Modi.

The prime minister had virtually rebuffed the plea stating that the system of granting central status had become outdated.

"Modi failed the youths of Bihar as he was unable to provide them jobs. When they went to BJP-ruled states like Maharashtra and Gujarat in search of livelihood, they faced physical assault and insults," the Congress president said.