With inadequacies in the Russian MiG-29Ks that India bought to operate off the INS Vikramaditya and INS Vikrant, the acquisition of a capable, long-range multi-role carrier-based fighters will be critical for India's naval power. 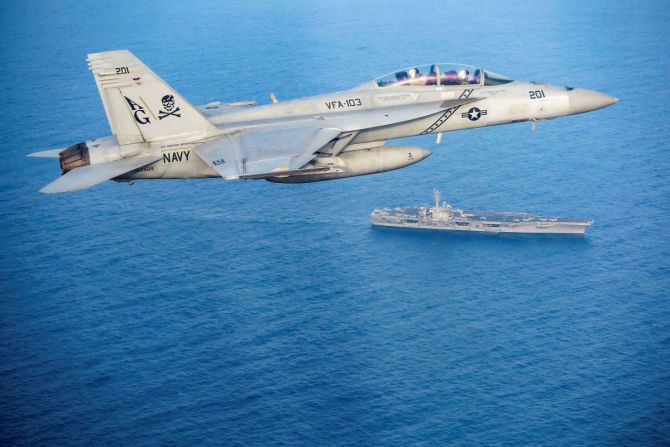 In an important demonstration of its ability to operate from India's warships, a US navy F/A-18 Super Hornet roared down the runway of the Indian Navy's shore-based test facility in Goa and got airborne at the end, leaping off the 'ski-jump' that equips the decks of Indian aircraft carriers.

The F/A-18E/F Super Hornet, which operates as the primary fighter on all 11 US navy aircraft carriers, is one of the leading contenders in the Indian Navy's tender for 57 multi-role carrier-based fighters (MRCBF).

A strong challenger is the naval version of the French Rafale fighter -- called the Rafale Marine.

With clear inadequacies in the Russian MiG-29Ks that India bought to operate off the INS Vikramaditya and INS Vikrant, and a power shortfall in the naval version of the Tejas fighter, the acquisition of a capable, long-range MRCBF will be critical for India's naval power projection in the Indian Ocean Region.

The combination of fighter and UAVs was flight-tested while carrying out 'manned-unmanned teaming' (MUM-T). In this mode, a Block III F/A-18 Super Hornet acts as a mothership that remotely commands and controls three UAVs.

'The software development, connectivity to the fighter and the flight tests were completed in less than six months. Manned-unmanned teaming is a key capability for the US Navy,' Boeing said in a media statement.

During the test flights, F/A-18 pilots entered commands into a tablet, which were processed and transmitted to the UAVs through the Block III fighter's hardware. 'The UAVs executed all commands given by F/A-18 pilots during tests over a two-week period,' said Boeing.

With the largest digital touch screen in any fighter cockpit, the Super Hornet claims to be an industry leader in the development and installation of the hardware and processing power needed for future digital capabilities and growth.

Using an analogy from American football, Boeing says: 'Future fighter pilots will be the quarterback of the skies, orchestrating commands and controlling UAVs from the integrated Block III touch-screen cockpit.'