Will move court if ordinance is brought for Ram temple: AIMPLB 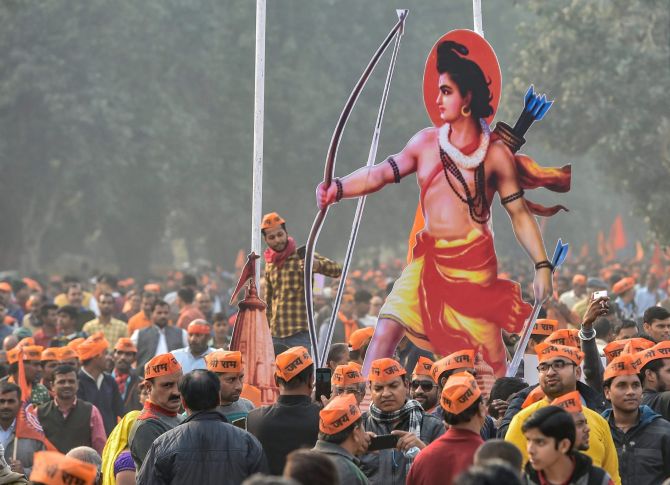 The All India Muslim Personal Law Board on Sunday said it will move court if the Centre brings an ordinance for construction of Ram temple in Ayodhya or the "triple talaq" bill is passed in the Rajya Sabha.

At the meeting of the working committee of the AIMPLB, the board also urged the Centre to ensure that no inflammatory statements are made regarding the Ayodhya issue and urged the Supreme Court to take cognizance of such remarks, secretary of the board Zafaryab Jilani said.

After the meeting, senior member of the board Qasim Rasul Iliyaas said, "The Centre has brought an ordinance on triple talaq. Its duration is of six months. If it is made into a law, then we will challenge this in the Supreme Court."

"This ordinance was prepared without any consultation with the Muslim society... we will urge the secular parties not to allow its passage in Parliament."

The Muslim Women (Protection of Rights on Marriage) Bill, 2018, proposing to make instant triple talaq illegal has been passed in the Lok Sabha and is pending approval of the Rajya Sabha. The government had earlier promulgated an ordinance to make the practice a penal offence.

The government is expected to push for the passage of the triple talaq bill in the Upper House of Parliament during the ongoing Winter Session of Parliament.

Iliyas also said, "In the Ayodhya issue, the final decision of the court will be acceptable to the board."

"In the condition of maintaining status quo at the disputed site, legally no ordinance can be brought... If an ordinance is brought, then the board will challenge it," Jilani said.

The Supreme Court had in October said that an "appropriate bench" will decide in the first week of January the schedule of hearing of the Ram Janmabhoomi-Babri Masjid land dispute case.

Pressure has been mounting on the BJP from the Sangh Parivar, of which it is a part of, and a section of hardliners within the party to make headway for the construction of Ram temple, which they termed as an issue relating to peoples' faith (aastha).

The Sangh Parivar has been demanding construction of a temple at the disputed site through an act in Parliament.

However, with the BJP's tally in the Lok Sabha having gone down on account of loss in a number of by-polls and the party falling short of majority in the Rajya Sabha there have been demands that an ordinance be promulgated to facilitate temple construction before the general elections due next year.