News
Business
Movies
Sports
Cricket
Get Ahead
Money Tips
Shopping
Sign in  |  Create a Rediffmail account
Rediff.com  » News » Will Kharge be an effective leader of opposition in Parliament?

Will Kharge be an effective leader of opposition in Parliament?

Mallikarjun Kharge may be a respected politician and a loyal Congressman, but he is not a great orator nor does he have exceptional debating skills. Vicky Nanjappa/Rediff.com reports 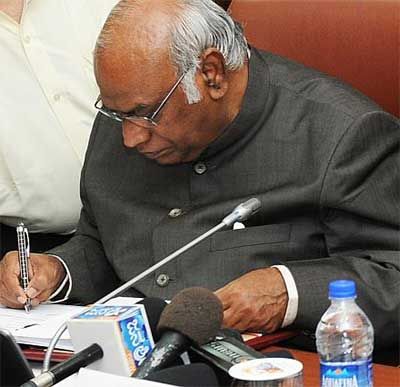 He has been known as Karnataka's eternal chief minister-in-waiting. Even after 45 years in politics, the post of chief minister eludes Mapanna Mallikarjun Kharge. On Monday, Kharge was elected as the Leader of Opposition in the Lok Sabha by the Congress.

Despite being denied the post of chief minister thrice, he has not once spoken out against his party, which shows his unquestionable loyalty towards the Congress party and the Gandhi family.

Kharge is one of the most respected politicians in Karnataka. The stern-looking man is in reality a mellow person, say people close to him. He never raises his voice and is a jovial person, they say.

A Dalit leader, Kharge has been elected nine times in a row from the Gurmitkal assembly constituency. He is a champion there and one of the few politicians who have worked for his constituency. An extremely popular leader, it is said that if Kharge is contesting from Gurmitkal, candidates are fielded against him only as a formality.

At 72, with 45 years of experience in politics, Kharge is known as humble person. He has stayed away from controversy all through his political career and taken on whatever has come his way.

Kharge has always been a state leader. In 2009, he contested the Lok Sabha elections from the Gulbarga constituency and won by a margin of 74,000 votes. He was railway minister in the outgoing United Progressive Alliance government.

But his choice as leader of opposition has surprised many.

Kharge is not a great orator nor does he have exceptional debating skills. He speaks to the point and only when necessary. He has been leader of opposition in the Karnataka assembly and was Karnataka Pradesh Congress Committee president in 2008.

Kharge’s first attempt at becoming chief minister was during former chief minister S M Krishna’s regime in 1999. Krishna beat him to the post on the grounds that it was he who led the Congress to victory in the state.

Kharge was again in the running for the chief minister’s post when the Congress and the Janata Dal-Secular together formed the government in Karnataka in 2008. But he was overlooked and Dharam Singh was given the post. Deve Gowda, the JD-S supremo, is said to have preferred Singh over Kharge.

In 2013, when the Congress won the elections, his name again did the rounds. Though Siddaramaih beat him to the post, almost all but 17 MLAs in the Congress felt that Kharge should have become the CM. But the Congress, fearing a revolt, gave into Siddaramaiah. Kharge did not utter a word and was rewarded the post of railway minister.

During his stint in Karnataka, he has been the irrigation minister and also home minister. Though he has a decent track record in these ministries, there was nothing exceptional he did.

Kharge was born into a poor Dalit family at Warwatti in Gulbarga. He studied and practised law for a few years before taking to politics. He joined the Congress in 1969 after donning the role of a union leader for some time. He contested his first election in 1972.

In 1976, Kharge became minister for the first time in the Devraj Urs government and held the primary education portfolio. He has also held portfolios in the Gundu Rao, S Bangarappa and Veerappa Moily governments. In 1994, he became the leader of opposition in the state for the first time.

Some say Kharge is too good a man to be in politics. He is one of the very few politicians who have managed to be in politics without indulging in backdoor politics. When he was leader of opposition in Karnataka he conducted himself well and many listened to him out of respect, which came from his image and seniority.

As the leader of opposition in Parliament it is tough to say how he would perform. Speaking in English and Hindi are not his strengths and many feel it could be a stumbling block.

Kharge is married to Radhabai and has three sons and two daughters. 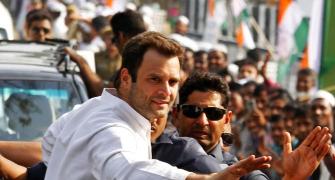 Is Rahul fit to be LOP? 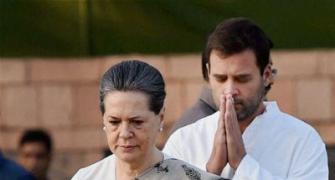 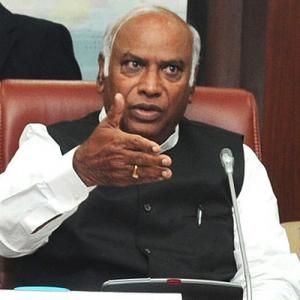 Why Sonia picked Kharge to lead Cong in Lok Sabha 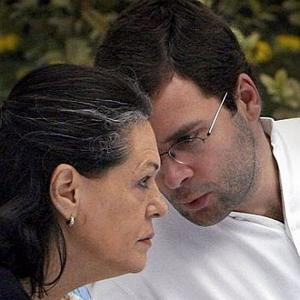 Who will be the leader of the Opposition in the new Lok Sabha?