Will it finally be Kharge, Selja or Wasnik for Congress president?

In a day of frantic developments, Digvijaya Singh entered the fray for the Congress president's election as Rajasthan Chief Minister Ashok Gehlot opted out of the race and the suspense over his continuation at the helm in the state deepened with the party saying it would be decided in a day or two. 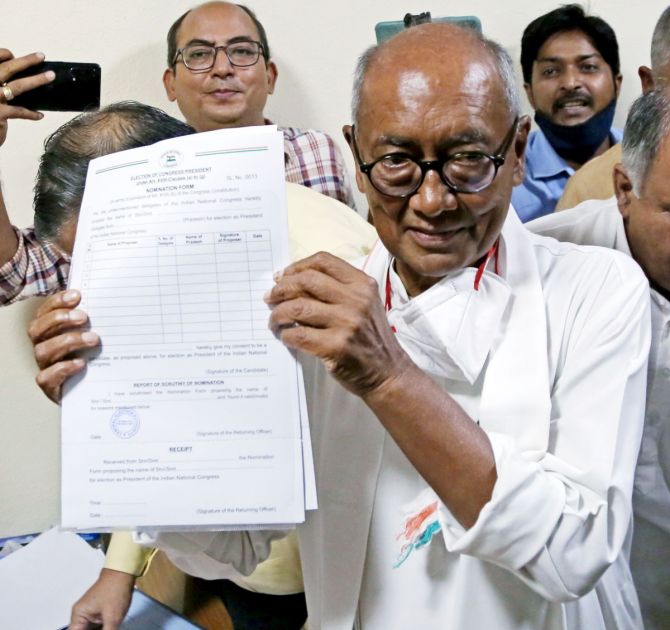 While Singh said he would file his nomination on Friday, it remained unclear whether he or someone else would have the backing of Sonia Gandhi as her successor, with sources saying a Dalit candidate could emerge as a dark horse for the top party post.

Sources said Mallikarjun Kharge is being considered as a frontrunner for the post and will be meeting Gandhi Friday morning. The names of Mukul Wasnik and Kumari Selja are also doing the rounds.

Shashi Tharoor, who will file his nomination on the last day on Friday, had a meeting with Singh and the two leaders said theirs would not be a contest of rivals but of friends and the Congress will finally win.

Hours after Gehlot met Gandhi and also took moral responsibility for what is being seen as a rebellion by MLAs loyal to him in Rajasthan, his bete noire Sachin Pilot visited the Congress president's residence late evening and held discussions.

The party also issued an advisory warning of strict disciplinary action against leaders making public statements on internal matters of the party and against other party functionaries.

After his half-an-hour meeting with Gandhi, Gehlot accompanied by AICC general secretary (organisation) K C Venugopal told reporters that he apologised to the Congress chief for the developments in Rajasthan where some MLAs loyal to him held a parallel meeting and set some conditions to the party high command.

Gehlot also announced that he will not contest the Congress presidential polls after taking moral responsibility for the political crisis in his state.

"I have decided that I will not contest the Congress president's election as I take moral responsibility for the events that took place on Sunday," he said.

Eighty-two MLAs loyal to Gehlot participated in a parallel meeting at a minister's residence in Jaipur instead of joining a meeting of the Congress legislature party convened for passing a resolution authorising the Congress chief to appoint a successor to Gehlot, who was to contest the Congress presidential election.

The three-time Rajasthan chief minister described himself as a disciplined soldier of the party and expressed his sadness over the turn of events in the state.

Soon after, Venugopal said outside Gandhi's 10, Janpath residence that the Congress president would take a decision on who would be the chief minister of Rajasthan in a day or two. On the presidential election, he said things would become clear by Friday afternoon when the nomination process would end.

Venugopal later issued an advisory saying the party is noticing statements of Congress leaders in Rajasthan regarding the party's internal matters and against other leaders.

"It is advised that all Congress leaders at any level should refrain from making public statements against other leaders or about the party's internal matters.

"Strict disciplinary action will be initiated under the provisions of the Constitution of the Indian National Congress if any violation of this advisory is made," the advisory said.

The day saw hectic political meetings starting with Mukul Wasnik meeting Gehlot and Tariq Anwar meeting A K Antony. Both Antony and Anwar are chairmen and member secretary of the party's disciplinary committee which has issued show cause notices to three party leaders in Rajasthan. Pilot is also learnt to have held meetings with some party leaders.

Digvijaya Singh collected a total of 10 sets of nomination papers and said he would file his papers on Friday.

"I have taken the nomination papers and most probably I will file my nomination tomorrow," Singh told reporters.

After his meeting with Singh, Tharoor tweeted, "Received a visit from Digvijaya Singh this afternoon. I welcome his candidacy for the presidency of our party."

Polling for the post will take place on October 17 and the result will be announced on October 19.