Farmer leader Naresh Tikait Sunday said that protesting farmers will honour the dignity of prime minister, but are also committed to protect their own self-respect, a day after Narendra Modi said his government was just a “phone call away” for talks with them. 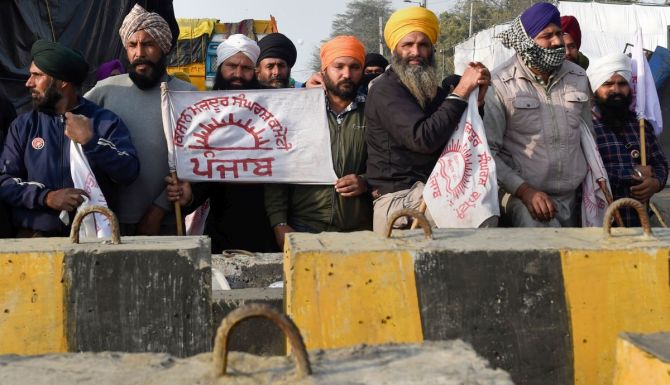 Tikait said the government should “release our men and prepare an environment conducive for talks”.

“A respectful solution should be reached. We will never agree to anything under pressure,” he said at the Ghazipur border between Delhi and Uttar Pradesh.

Prime Minister Narendra Modi had Saturday said his government's offer on agri laws made to protesting farmers “still stands” and it was a just “phone call away” for talks, days after violence broke out in parts of the national capital on Republic Day.

“We will honour and respect the dignity of prime minister. Farmers don't want that the government or Parliament bows down to them," Tikait said.

“Will also ensure that the self-respect of farmers is protected. A middle way should be found. Talks should be held," he added.

During their January 26 parade, many of the protesters, driving tractors, reached the Red Fort while some of them hoisted religious flags on its domes and the flagstaff at the ramparts, where the national flag is unfurled by the prime minister on Independence Day.

Tikait said, “The violence on January 26 was part of a conspiracy. The Tricolor is over and above everything. We will never let anyone disrespect it. It will not be tolerated,” he said.

The Delhi Police has registered nearly 40 cases and made over 80 arrests in connection with the violence and vandalism.

“The government should release our men and prepare an environment conducive for talks. A respectful solution should be reached. We will never agree to anything under pressure,” Tikait asserted.

In his monthly Mann Ki Baat radio broadcast Sunday, Prime Minister Modi also referred to the Red Fort incident, saying the country was much pained at seeing the dishonour to the Tricolour on Republic Day.