Hammered by political opponents for his alleged "Muslim ban" policy, United States President Donald Trump on Thursday said his administration will do everything in its power to defend and protect religious liberty of America, which will remain a tolerant society where all faiths are respected. 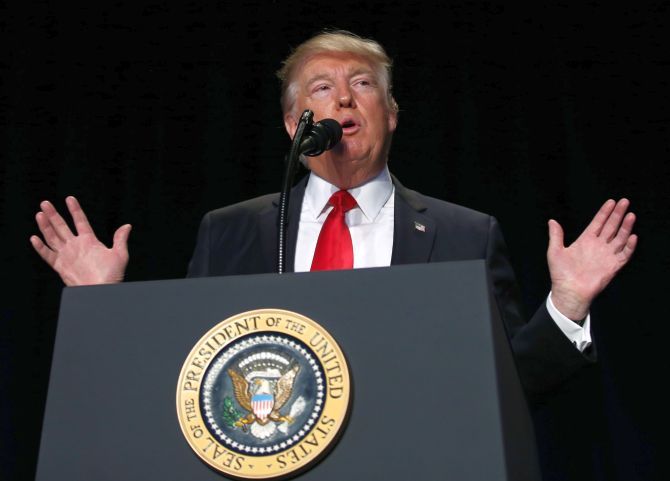 "I want to express clearly today, to the American people, that my administration will do everything in its power to defend and protect religious liberty in our land," Trump said in his first address to the annual National Prayer Breakfast.

"America must forever remain a tolerant society where all face are respected and where all of our citizens can feel safe and secure," said Trump.

Trump said that in recent days, his administration has begun to take necessary action to achieve the goal of making the US safe and secure.

"Our nation has the most generous immigration system in the world. But these are those and there are those that would exploit that generosity to undermine the values that we hold so dear. We need security," said Trump, whose move to impose a travel ban on people from seven Muslim-majority countries has invited criticism and outrage at home and from abroad.

"There are those who would seek to enter our country for the purpose of spreading violence, or oppressing other people based upon their faith or their lifestyle, not right. We will not allow a beachhead of intolerance to spread in our nation. You look all over the world and you see what's happening," he said, justifying his decision on temporary immigration ban.

Trump said that in coming days, his administration will develop a system to help ensure that those admitted into the US fully embrace American values of religious and personal liberty.

Praising his Defence Secretary Gen (rtd) James Mattis, who is currently travelling to South Korea and Japan, Trump said, things will be different.

"We have seen peace loving Muslims brutalise, victimise, murdered and oppressed by ISIS killers. We have seen threats of extermination against the Jewish people. We have seen a campaign of ISIS and genocide against Christians, where they cut off heads," he said.

Asserting that freedom of religion is a sacred right, Trump said it is also a right under threat all around.

In an apparent reference to the tough phone calls that he has had with some world leaders, Trump asked his supporters not to worry about it.

Trump started the prayer breakfast by asking to pray for increasing the ratings of his firmer show Apprentice.

"We had tremendous success on The Apprentice. And when I ran for President, I had to leave the show. That's when I knew for sure that I was doing it. And they hired a big, big movie star, Arnold Schwarzenegger, to take my place," he said.

"We know how that turned out. The ratings went down the tubes. It's been a total disaster and Mark will never, ever bet against Trump again. And I want to just pray for Arnold if we can, for those ratings," he said.