In the long-running rivalry between the 'Delhi Karmapa' and the 'Chinese Karmapa', the latter seems to have won. Ajai Shukla reports. 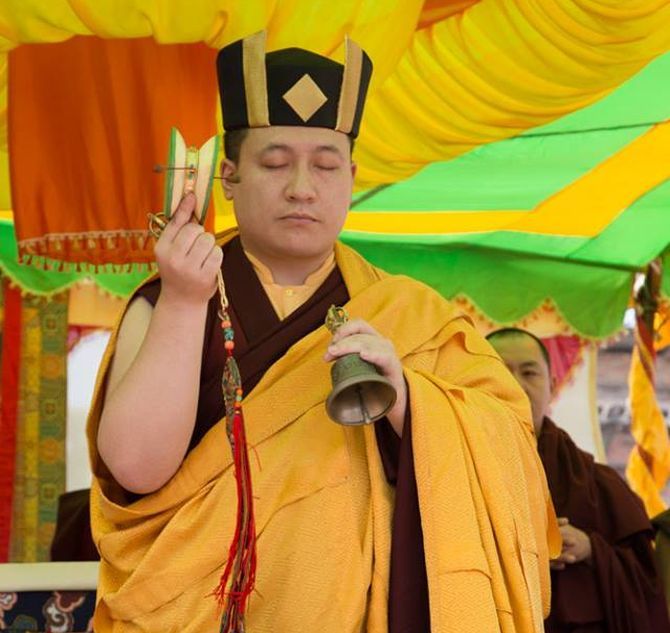 India's play in Tibetan religious politics has always been a high stakes game. India’s grant of refuge to the 14th Dalai Lama in 1959 led to the 1962 war with China; and tensions between New Delhi and Beijing continue over the iconic Tibetan leader’s ‘splittist’ (separatist) activities, allegedly masterminded from India.

With the Dalai Lama safely out of Beijing’s clutches, China ensured control over the Panchen Lama, a second major reincarnated Buddhist lama, based in Xigatse.

Within days of the Dalai Lama identifying a six-year-old Tibetan boy as the 11th Panchen Lama in 1995, Beijing spirited him away and anointed its own puppet Panchen Lama.

Now, political manoeuvring has intensified around who is the Karmapa -- who heads the ancient Karma Kagyu school of Buddhism.

Since the early 1990s, two lamas have claimed to be the 17th Karmapa.

Ogyen Trinley Dorje, the so-called ‘Chinese Karmapa’, is recognised as the legitimate Karmapa by Beijing, the 14th Dalai Lama and most adherents of the Kagyu sect.

In 2000, aged 14, he escaped to India, claiming that he was not allowed to pursue his studies and religious duties in Tibet. He has headquartered himself in the Gyuto Monastery, near Dharamsala.

His rival is Trinley Thaye Dorje, the so-called ‘Delhi Karmapa’.

In March 1994, Thaye Dorje fled Tibet, via Nepal, to India. Here, he was officially identified as 17th Karmapa by the Shamar Rinpoche, one of the four regents authorised to identify a reincarnated Karmapa.

Yet, Thaye Dorje does not command the loyalty of most Kagyu Buddhists. His power, say his detractors, stems from deep connections with ‘players’ in the Indian state.

It has long been speculated that Indian intelligence suspects that the ‘Beijing Karmapa’, Ogyen Dorje, was a Chinese plant sent to India to divide the Kagyu sect.

Now, in the long-running rivalry between the ‘Delhi Karmapa’ and the ‘Chinese Karmapa’, the latter seems to have won, say close observers of the Tibetan diaspora.

With Thaye Dorje’s announcement on Thursday that he had married a ‘close childhood friend’ last Saturday, the ‘Delhi Karmapa’, appeared to have disqualified himself from a realistic chance to be accepted as the 17th Karmapa.

‘Thaye Dorje, His Holiness the 17th Gyalwa Karmapa, is delighted to share the wonderful news that he has married in a private ceremony,’ said an announcement on his website.

His spokesperson contends that Thaye Dorje continues his activities as Karmapa.

However, he has passed on responsibility for monastic ordinations to another lama, being ineligible as a married person.

The spokesperson insists: “Karmapa Thaye Dorji has been Karmapa from birth, and will continue his activities in this lifetime, as he has for the previous 16 incarnations.”

Yet, the reality is that, even though the marriage of high lamas is not unheard of -- and the 15th Karmapa had been married himself -- only accomplished spiritual masters can marry and yet claim the spiritual authority associated with a post like the Karmapa.

Straws in the wind have suggested a more approving stance by New Delhi towards the ‘Chinese Karmapa’ in recent times.

In December, he had been allowed to visit Tawang; and he was also permitted to attend a Buddhist gathering at Nalanda.

Yet, simmering tensions over who is really the Karmapa continue to play out between the two factions. At the picturesque Rumtek monastery, near Gangtok, which aspires to be the seat of the Karmapa, an armed police detachment keeps the peace after monks from rival Kagyu factions fought a pitched battle there in 1992.

The Indian Supreme Court is hearing the case to determine ownership.

Karma Kagyu is one of Buddhism’s four major sects. Nyingma is the oldest, which first travelled to Tibet from India through the iconic Guru Padmasambhava. The Sakya sect has a unique tradition of teaching followed by debate, a tradition that other sects deemed potentially heretical.

Then there is the currently influential Gelug sect, which is followed by the Dalai and Panchen Lamas. Linked with the famous Ganden monastery outside Lhasa, the 700-year-old Gelug sect has components of all the previous three sects.