Protests will be dealt with: Tomar to farmers backing agri laws

As thousands of farmers camped on Delhi's borders seeking repeal of three new farm laws, Agriculture Minister Narendra Singh Tomar on Monday told a group of peasants backing these legislations that these measures will benefit the peasantry and the agriculture sector and that the government will handle such agitations. The delegation of 20 'progressive farmers' from Haryana, led by Padma Shri awardee Kanwal Singh Chauhan, said the government may amend some provisions of the laws but should not repeal them.

The delegation members said they were individual farmers and representatives of farmer producer organisations (FPOs).

The meeting took place a day before a 'Bharat bandh' to be observed by protesting farmers' organisations on Tuesday.

Explaining the benefits these laws will bring to the farmers and the entire agriculture sector, he said the reforms will bring private investment, create jobs in villages and make agriculture profitable.

"More the private investment, more profitable the agriculture sector will be," Tomar said and added that the farm infrastructure like cold storage and warehousing to be created in villages and setting up of 10,000 FPOs will discourage farmers from distressed sale of their produce.

The minister further said that farmers can store their produce in warehousing or cold storage units that would come up as a result of the reforms and sell them when they get better rates.

Tomar also said the Swaminathan Commission was set up during Atal Bihari Vajpayee's tenure and it submitted a report in 2006.

"But between 2006 and 2014, people had time. Had they wished, these reforms could have been implemented. But they did not have the guts to implement (it)," he said.

The minister said that before elections the Congress and other parties had promised agricultural reforms in their manifestoes.

"Had they (opposition parties) come to power, they would have implemented it.

Prime Minister Narendra Modi, through these laws and various schemes, has tried to encourage private investment in the farm sector, Tomar added.

In their memorandum, the group of 20 farmers demanded the government consider amendments as suggested by the protesting farmers unions but not repeal them.

'Take into account the suggestion of farmer unions and continue the farm laws.

'Ensure continuity of MSP and mandi system. We request you to continue the farm laws,' they said in the memorandum.

Kanwal Singh Chauhan, the president of Sonepat progressive farmers club, said, "Farmers are being misled. We know neither MSP nor mandi will be scrapped.

The BKU (Attar) national president said, "Had the government given in writing the continuity of MSP, the protest would not have happened. We support the new farm laws but all problems will be solved if MSP is assured in writing."

He alleged that the protest is 'politically motivated by the Congress' which is 'misleading' farmers.

The group also said protesting farmers were being 'misled' for political gains.

"I have come here requesting the government not to repeal the laws under pressure from protesting farmers. They are misled. Politics should not derail the reforms," Manjit Kumar, a farmer from Gurugram, told PTI after the meeting.

Vinod Gulia of Jhajjar-based FPO Harkisan Farmer Producers Company said, "Our FPO is close to Tikri border where a protest is happening but none of our members is participating.

"We are worried if the laws get repealed, we won't be able to market out produce directly, which we are doing now."

Farmers' children who are not keen on farming are getting new job opportunities in warehousing and cold storage units that will come up with the implementation of the new laws, he added.

A meeting between a representative group of agitating farmers and the government is already scheduled for December 9 for their sixth round of talks.

No breakthrough has been possible in the five rounds so far, as the protesting farmers have stuck to their demand for the repeal of the laws despite the government's assurance to look into specific issues without abolishing the legislations.

The three farm laws have been presented by the government as major reforms in the agriculture sector that will remove the middlemen and allow farmers to sell anywhere in the country. 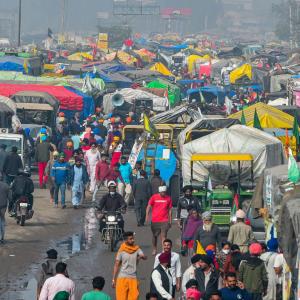