The BJP which stormed into Mamata Banerjee's fortress earlier this year by bagging 18 of the 42 Lok Sabha seats faced immense flak when the final NRC in Assam left out Bengali Hindus in large numbers. 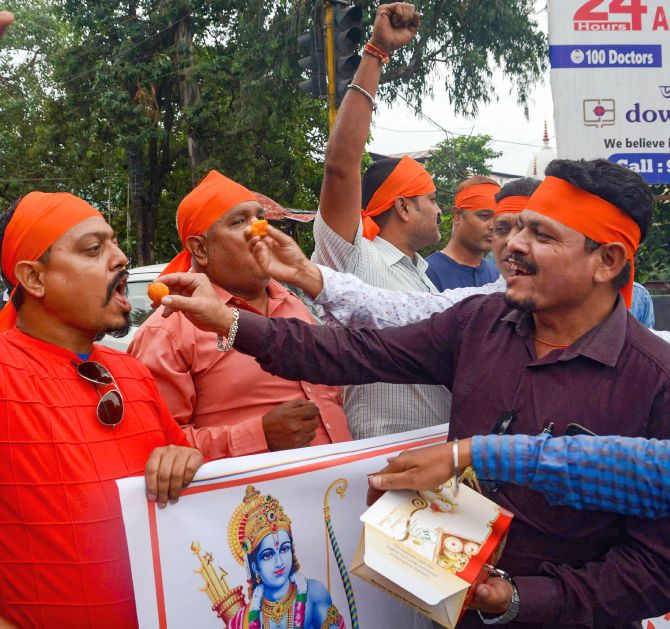 IMAGE: Activists of Rashtriya Bajrang Dal celebrate by offering sweets to each other after the Supreme court verdict on Ayodhya land case. Photograph: PTI Photo

On the back foot since the National Register of Citizens in Assam left out over 12 lakh Hindus, mostly Bengalis, the Supreme Court verdict on Ayodhya land dispute has provided the Bharatiya Janata Party in West Bengal fresh ammunition to polarise the state's electorate ahead of the crucial 2021 assembly polls.

The apex court on Saturday cleared the way for construction of a Ram temple at the disputed site in Ayodhya, and directed the Centre to allot a 5-acre plot to Sunni Waqf Board for building a mosque.

The BJP which stormed into Mamata Banerjee's fortress earlier this year by bagging 18 of the 42 Lok Sabha seats --- riding on issues of Trinamool Congress's alleged partisan approach and the promise to filter out illegal immigrants --- faced immense flak when the final NRC in Assam left out Bengali Hindus in large numbers.

Shortly after, panic gripped people in Bengal, with the Banerjee-led TMC employing the "anti-Bengali" rhetoric against the BJP and tilting the scales in its favour to an extent.

At least 11 people reportedly died or committed suicide in the state due to fear of exclusion from the NRC -- a document containing names of genuine Indians.

With Saturday's apex court verdict, however, the Bengal BJP hopes to consolidate Hindu votes before the 2021 assembly elections.

According to state BJP sources, it was the Ram Mandir issue in early nineties that had helped the saffron party, for the first time in Bengal, to bag around 16 per cent votes.

"During the nineties, we failed to keep up the momentum and vote share dropped to 4-5 per cent. But now the political ground is fertile for us, having bagged 18 seats and 40.5 per cent votes in Lok Sabha polls. The Ayodhya issue will further strengthen our mass base," a senior state BJP functionary said on the condition of anonymity.

Pointing out that the promise of Ram Mandir was the only constant in BJP's manifesto from 1996 to 2019, another state leader said the party had been committed to cause of Hindus and Hindu religion.

"After the NRC was published in Assam, some opposition parties like the TMC tried to brand us as 'anti Bengali' and 'anti- Hindu'. We were on a back foot for a while, but this Ayodhya case victory has provided us with much-needed ammunition to secure votes in the state," he claimed.

"We do not want to get into politics over Lord Ram. But the fact is that the BJP and the Sangh parivar have been fighting for a cause over the last three decades. So if there are brownie points to be made, it is quite natural that the BJP will earn it," Ghosh maintained.

A section of saffron camp leaders felt that the silence of the TMC on the issue provided the party with a fresh opportunity to charge the TMC as a "pro-muslim party".

"Why is that neither the TMC nor Mamata Banerjee have said anything on the matter? They should clear their stand. Actually they are apprehensive that welcoming the verdict might anger their Muslim vote bank -- their mainstay," state BJP general secretary Sayantan Basu claimed.

The apex court judgment on Ayodhya's disputed site brought back memories of the decades-old Ram Janmabhoomi movement which propelled the BJP from the fringes of national politics to becoming a dominant political force as it used the deeply emotive issue to mobilise Hindus.

Struggling to find a space in the country's politics, dominated by secular parties, the BJP under LK Advani hitched its bandwagon to the temple cause in its Palampur resolution in 1989, giving a defining Hindutva edge to its politics which until then had lacked a popular cause celebre.

The TMC, which had maintained a complete silence on the issue till Saturday night, said the BJP's dream of consolidating Hindu votes would fall flat in 2021.

"The NRC in Assam has proved how sympathetic they are to the cause of Hindus. They can fool people once but their dream of winning Hindus votes will fizzle out after 2021 assembly polls," a senior TMC leader added.

Pradipta Tapadar
© Copyright 2020 PTI. All rights reserved. Republication or redistribution of PTI content, including by framing or similar means, is expressly prohibited without the prior written consent.