'When violence spread, it looked as if Mamata was losing control, but soon, she was able to contain the situation.'
'Now, the TMC stands to gain the most.'
Avishek Rakshit reports. 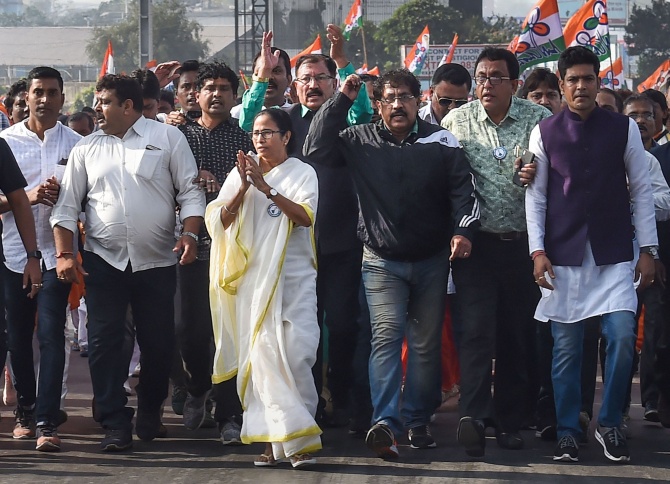 Riding the wave against the Citizenship (Amendment) Act, the Trinamool Congress has started gaining lost ground it ceded during this year's Lok Sabha polls to the Bharatiya Janata Party.

The BJP, in the meantime, has launched a counter offensive against the TMC in support of the amendment.

TMC supremo and Chief Minister Mamata Banerjee, who has been on the forefront in the political movement against the CAA and the National Register of Citizens, opposing it tooth and nail, has decided to intensify protests against the Act.

Political observer Sabyasachi Basu Roy Chowdhuri said this way the TMC has been able to regain some lost ground by connecting with the masses.

If the Centre feels pressurised and opts for changing its course of action, it will be a resounding victory for Mamata.

"For the time being, the TMC is at an advantage. When violence spread earlier, it looked as if Mamata was losing control, but soon, she was able to contain the situation. Now, the TMC stands to gain the most," Roy Chowdhuri said.

The Gorkhas and Nepali community in the Hills are suspicious that Hindu migrants will be settled in the Hills, and as a result, they will lose land as well as jobs.

A similar suspicion is being voiced in Assam and other north eastern states that are opposing the CAA.

The TMC, which otherwise had a poor show in the Hills and northern West Bengal, could also benefit in this region with the common opposition to CAA.

In the Lok Sabha polls, the TMC had maintained it will not allow the NRC or CAA in West Bengal and opposed the BJP on political and economic issues primarily.

The BJP, promising the NRC and CAA, besides alleging deteriorating law and order situation in the state, posted its best tally ever in West Bengal, bagging 18 seats with a 40.25 per cent vote share.

The BJP gained vote share and seats in pockets which had an indigenous Bengali Hindu majority, Hindu migrant belt and areas dotted by the backward class and scheduled caste and tribes.

The TMC gained vote share particularly in Muslim majority constituencies like Jangipur, Murshidabad and Basirhat, among others.

The BJP leadership credited polarisation of votes and Prime Minister Narendra Damodardas Modi's leadership for its success in the state, but political observers noted that the voting pattern was based on the anger against the state administration and anti-incumbency factor.

However, in the assembly by-elections, the TMC defeated the BJP in its own stronghold in Kharagpur Sadar and won the other two assembly seats of Kaliaganj and Karimpur.

While the TMC credited its leadership, organisation capabilities and support of the people for the resounding victory, BJP leaders clandestinely blamed the CAA and NRC for the failure.

However, a systemic wave of violence, allegedly carried out by the minorities, broke out across West Bengal, targeted at the railways, highways as well as government and private property.

This left the chief minister worried.

The BJP took the opportunity to blame the state administration for failing to contain the incidents and also put the onus on Bangladeshi immigrants for the violence.

The state's urban development and municipal affairs minister Firhad Hakim warned, 'The fight over CAA and NRC is not a fight between the Hindus and Muslims. If the majority community suffers as a result of the actions of a particular community, it will only benefit the BJP. If 70 per cent of the Hindu population vote for BJP (in the 2021 assembly election), they will come to power here.'

Dilip Ghosh, the BJP's Bengal president, has resorted to a series of 'thanksgiving' marches after the Centre introduced the CAA.

Political analysts said factors that would determine the political landscape of Bengal include: How the Centre tackles the protests and whether it goes ahead with the CAA.