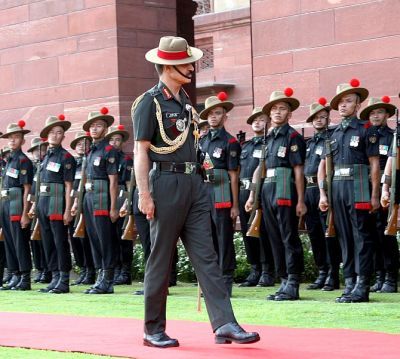 Some officers in the Army have written to the Controller of Defence Accounts stating that no deductions be made in their salary without their instructions. Upasna Pandey/Rediff.com reports

Army Chief Dalbir Singh Suhag’s recent decision to donate Rs 100 crore, equivalent to one day’s salary of 1.3 million Army personnel, to the Prime Minister’s Relief Fund has sparked a controversy in the rank and file of the Army. The sentiment is that the armed forces are already doing enough for the nation and such donation should have been voluntary, at best.

While senior officials in the Army insist that the chain of command was consulted before the Army chief took the decision, some officers are reported to have written in protest against the move. This has forced the Army into a situation where officials can’t say when the ‘deductions’ would finally be made.

Army Chief Suhag had donated ‘over Rs 100 crore’ to the Prime Minister’s Relief Fund at the ‘At Home” organised on Army Day. “This amount has been raised by officers and soldiers of the Army donating a day's salary each,” according to a government release.

“There was absolutely no discussion around this. You normally expect some communication going out from the chief to the officers and other ranks. We think we make a much bigger contribution than paying one day’s salary. The sacrifice made by our jawans and officers can never be measured in money and we are more than willing to donate one day’s salary, but it should at least appear to be a collective decision. A donation cannot be made on the basis of an order, it has to be an individual decision,” said a senior Army official.

Matters have reached a point where some officials have come out openly against the move, some even writing to the Controller of Defence Accounts, stating that no deductions be made in the officer’s salary without his instructions. 'It is requested that no deduction or donation whatsoever without my consent or undertaking be made from my salary,' the letter states.

There are others who are happy the Army has stepped in to contribute to the PM’s Relief Fund.

“The Army has always stood up to shoulder any national responsibility in times of crisis or emergency. We have contributed during the tsunami and there is no disconnect with the chief’s decision on this. The Kashmir floods caused huge loss of property and life in the Valley, so it is important we join hands with the PM’s Relief Fund,” said a senior Army officer who did not want to be named.

It is not so much the decision to deduct a day’s salary but the manner in which many Army personnel feel the Army chief didn’t consider it necessary to issue a note informing the personnel before deducting their pay.

A senior defence ministry source, who did not wish to be named, dismissed any discontent among the 1.3 million strong army personnel force over the issue. “The chief of Army is not expected to send out intimation or take the views of all personnel. However, he does share and take inputs from the chain of command and it was done this time as well.”

He added that the Indian Air Force also raised funds for the PM Relief Fund recently by deducting a day’s salary of the personnel, but it was done with an option to 'volunteer’ for this contribution. But in the case of the Army’s donation to the PM’s Relief Fund, the `voluntary’ element was missing.

“The decision to deduct a day’s salary is not a first. It has been done before by the Indian Army. Whenever there are national calamities, we do step in make contributions to the PM Relief Fund,” added the source.

Sources point that the one day salary is yet to be deducted in the month of January and it is not confirmed if it will be pushed to February or later.